Our toilets, our national shame

Travelling Russia extensively, it is always with great trepidation that I enter public bathrooms in many areas, such as at train stations, parks and other areas. But this is not limited only to the public. Working with heavy industry the same is true for most of the older, heavy manufacturing facilities. 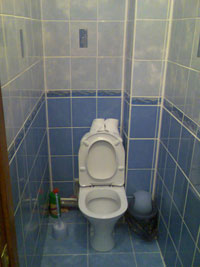 Our toilets, our national shame

Usually, if one is lucky, the toilet is at least a porcelain toilet, usually with the cover, the seat, taken away and never with anything like toilet paper provided. Some times even the walls are pealing and crumbling. The user is forced to sit on just as often, a disgusting, dirty bowl, balancing uncomfortably on the edge, to do what nature demands. Carry your own toilet paper, or if you are lucky, you’ll be using newspapers.

Then there is the unlucky “toilets”, little more then Asiatic holes in the ground, where like a dog, the user is forced to squat, do his duty and hope the aim is good and the knees do not give out. Never mind if the person is an invalid with a bad leg, back or missing appendage. The stench in these toilets, with no real plumbing to wash away the waste from inside the pits, is over powering.

Beyond the discomfort and beyond the disgust, it is more important, what it is that this says about us, as a people and about our nation, as a whole. Are we a civilized population or some second world Asiatic substrate? Toilets, you see, say everything about the relationship of the people with themselves and others and what they expect from their governments and on how much the government cares about its people.

While all apartments and most houses have normal, modern toilets to sit upon, why is it that we are so passive in our demands for the same dignity from our public restrooms and from those at our jobs?

To the bosses out there and their lack of caring for the very basics of their workers, learn humility and care enough about your workers to make a change. For one, with a relatively low investment: proper plumbing, toilets and yes, very important: supplied toilet paper, you can not only raise the moral of your workers, and thus their productivity, but also their health and thus their productivity, as a more sanitary environment will lead to fewer sick days. By putting a bit of cash up front, by treating your employees as actual people, you can benefit greatly from this. Try this kindness, your workers are not vermin, subhuman or an afterthought, they are the very foundation that makes your organization function.

Now for the government.

You want to be taken seriously in the eyes of the modern world? What kind of reaction do you think tourists and visitors have after seeing this, when they return to their home countries? It is time to take this crisis and create jobs, by modernizing this infrastructure.

Further, this improves the health of the population, by limiting disease vectors and eliminating a place for flies to breed. And yes, it also improves moral, by improving, however incrementally, the quality of life of the average person, especially those not rich enough to travel by plane.

It is time for us to stop being silent about this issue, to stop grumbling under our breath, as we try not to breath in the stench of these biological disaster zones. It is time we started demanding that the issue be resolved. It is time we sit up right, with dignity, while doing nature’s duty.