Beware of JSF, the Swindle of the Century 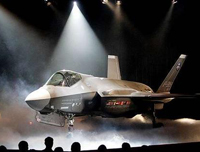 Beware of JSF, the Swindle of the Century

Sometimes, it would seem, the fate of entire nations is intimately connected to specific items. The highly publicized Joint Strike Fighter is precisely such an item. When the project was first launched, this assertion would merely cause some eyebrows to be raised in surprise. Today, however, the JSF is going through as deep a crisis as the United States. Its development seems to follow the same ups and downs as the nation from which it hails.

Originally touted as the ultimate fighter plane, superior in all respects to anything that had ever flown before it, the JSF was supposed to do anything its operators would request it to do: intercept, strafe, bomb, reconnoitre, patrol, in short, take on every rôle imaginable. It would do all that and still beat the competition. The JSF was supposed to be the aeronautical equivalent of superman. To top it off, the JSF was to be equipped with stealth technology so as to render it invisible to enemy air defenses. Needless to say, few in the US were surprised at these specifications, since from early on, US children are raised with the idea that their country is superior. Here, then, was an aeroplane that personified everything the US likes to believe about itself. It was to be, so to speak, the very nation with wings, which really means a lot, since in the US they seem to believe the Air Force is God itself. I am sure future theologians, historians and historical anthropologists will have a field day doing research on this topic.

Begun in the early 1990s in order to replace a number of obsolescent warplanes in the US and other air forces, the JSF program was to produce an aeroplane that would render everything else useless and defenseless. Could it be that the publication of Fukuyama's book on “the End of History” inspired the JSF planning team? Indeed, during the early nineties, optimism was running so high that nothing actually seemed too far-fetched, no goal unattainable. It would seem the US had finally secured its long yearned-for position as the world's sole superpower. The circle had been closed, history had ended, the JSF program could be launched. In 2001, Lockheed-Martin was pronounced the winner of the competition, defeating a design by Boeing.

As soon as Lockheed-Martin had won the contract, a gigantic propaganda offensive was unleashed. No superlative was shunned when it came to extolling the virtues of an aeroplane that yet had to be designed, built and flown. As had happened with earlier US fighter aircraft purported to be the world's finest in their day, the new one was also offered to US client states. Britain, Israel, Italy the Netherlands, Scandinavian countries, were invited not only to buy the still unborn aeroplane (at a price of 45 million dolars apiece), but also to join in its development from the earliest stage. Probably, US defense industry circles had finally come to realize that Europeans tend to be much more creative than US researchers, but also that the average return on the research dollar invested in Europe has always been significantly higher than in the US.

Yet the program seemed ill-fated from the beginning. The first flying models proved way too heavy (one metric ton above specifications) and the design needed to be drastically changed. There have been problems with the engine, with performance, with combat capabilities, in short, the JSF almost seemed living proof of the validity of Murphy's Law: anything that can go wrong, will go wrong.

Yet any points raised, questions, doubts, comments, whatever, everything written or said about the JSF even remotely looking like criticism has from the beginning been wiped from the table by the massive JSF propaganda team. The result has been that anyone saying anything ever so slighlty unkind about the JSF has been systematically treated like some kind of holocaust denier.

This has been especially true in the US client states that were persuaded to join the program and to contribute lavish funding up front: Britain (2 billion dollars), Italy (1 billion), the Netherlands (0.8 billion), Turkey, Canada, Australia, Denmark and Norway. Israel was allowed to join without a steep entrance fee, no doubt because this country is so heavily subsidized by the US anyway as to make any payment up front senseless. This financing by US vassals is where the swindling of the entire project becomes apparent. Why should these countries pay for the development of a weapons system to be delivered by the very imperial power that claims to be guaranteeing their safety? Does not the US have enough money of its own? If it does not, what is US “protection” really worth? Hence, when the US began to beg for funding to support the development of the JSF, it was already apparent its power was beginning to dwindle.

Requesting funding from vassals was really shameful and preposterous. The JSF has been so designed that it cannot be served and operated without the permission of the Pentagon and the company that produces it. JSF operators have thus already signed away their sovereign powers of decision over an aeroplane whose original planned cost of 45 million dollars has meanwhile risen to 60 million dollars apiece. There are persistent rumors the price will rise to 100 million apiece before the first production models are to be delivered to the air forces of the client states. Why can't a program that has been so closely monitored from the beginning be kept within the bounds of the original budget? If this is proving impossible, how much faith can be put in the JSF's eventual operational superiority?

As for the JSF's highly praised stealth characteristics, the actual military value of these should be seriously questioned. In 1999, the supersecret US F-117 was not invisible to Yugoslav air defense radar: one of these outrageously expensive machines was shot down as it was raining death and destruction on innocent Yugoslav civilians. These are all unwelcome considerations that are not allowed to be mentioned in the controlled public debate on the aeronautical equivalent of superman.

Recently, however, some sense seems to have descended into the minds of those once persuaded to acquire the latest US weapons system. Israel is trying to wriggle itself out of the deal and the Netherlands governing coaliton has become split over the merits of the JSF. Its recent renaming to “Lightning II” has not yet caught on. By now, people have come to realize that, as with Hollywood movies, anything that carries a numeral in the title is of poor quality.

It seems that as the US itself is moving inexorably toward the abyss, the fate of the JSF may be seen as its faithful reflection. It would not surprise me if the JSF would undergo the same fate as Argentina's once admired jet fighter “Pulqui II” (have you ever heard of it?). It was supposed to be superior to anything then flying, but the program never made it beyond the prototype stage. Before this aeroplane could be produced in any quantity, Argentina experienced one of its deepest crises and the entire program was shelved. If that will not be the JSF's fate, it certainly looks very likely now. It certainly seems nobody will be able to stop the US from disintegrating. I am sure some would resent this, but many, many people around the world would be very, very happy indeed.