The web of precariousness 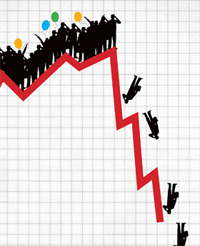 The web of precariousness

A popular Italian evergreen from the 1970s depicts a contemporary conundrum for many Europeans: “Chi non lavora, non fa l’amore” go the lyrics. The woman tells her man, “If you don’t work, there will be no love-making in this house. If you strike and don’t bring home pay, I will strike too. No love-making here!” The worker goes back to his job and strikers beat him up and call him a scab. No sex if he strikes, beatings if he works. He is truly the superfluous and precarious man. His only hope is that the capitalist boss relents and grants the pay increases the union demands and lets love into his house again. But that, he realizes, is unlikely.

The word precarious has become one of the most (un) fashionable words in Europe. Precario in Italy. Precaire in France. Prekär in German. For life in the Old World of Europe is precarious in general. Precariousness looms like a black cloud over the continent. The fragility of human life and of the life style many generations of westerners are accustomed to rages like a modern plague. Precariousness is a contagious disease. The pathos of a generation, it leaps from worker to worker, from class to class. Life in our times has never seemed more temporary, more fleeting. Permanence belongs to another age.

Many Europeans feel superfluous, ephemeral and alienated. People are stunned and bewildered by the rapid fall from yesterday’s well-being into the abyss of precariousness today. Their desperation is more than just the sum effect of the economic crisis, which for many Europeans means pay cuts or job loss, reduced social benefits, an uncertain future for themselves and their children, spreading poverty, and intensified social alienation. It also originates in the disappearance of the former social guarantees that today are crumbling around them in fetters.

The situation in Europe is different from that in America where the social idea has always been truant. The social idea is a European invention. Unlike in the USA, Europe’s earlier social-oriented governments looked after their citizens. People counted on it. That sense of security has now vanished. Not only because of capitalism’s failures and the economic crunch but also especially because of the growing power of all-European institutions headed by the multinational-dominated European Union.

Since the onset of the world economic crisis, the fragility, uncertainty, undependability and instability of life has infected one an all, from Scandinavia to Greece, from the UK to Russia, making the poor more desperate and the rich increasingly greedy. Precarious, precario, precaire, prekär refer not only to an entire social category, it refers also to the container in which life unfolds.

Precariousness means life without dreams. And confusion about the real present, that what has happened, really happened. Everyone clinging to what once was, to the material comforts that capitalism once offered, and will never be again. Clinging to the life raft of a former life, today however branded by its infectious atmosphere of violence: imperialist wars, daily rapes and murders, robbery at every social level, and a coming apart at the seams of the very social fibre whose filaments have blown away, the realities of a world in which tenderness is hard to find. Precariousness is marked by fear. Fear of the future, fear of even looking toward the future. And besides, what future lies ahead? People hope for a return to some semblance of normality, yet, in the knowledge that things will never be the same again.

Precarious in Europe refers first of all to deprivation of the right to employment and a decent income. In today’s precarious era, any fulltime job at all for young people is a chimera. Until the consolidation of the hegemony of the market economy and globalization, Italy ’s workers were protected by powerful trade unions—CGIL (Italian General Confederation of Labor with 5,000,000 members), UIL (Italian Union of Workers, 2,000,000 members), CISL (Italian Confederation of Workers Trade Union, 5,000,000 members). The unions are still there, a factor in politics, although successive rightwing governments led by Silvio Berlusconi have so undermined trade unions and intensified the precariousness of employment that labour’s demands have diminished. Any temporary work is better than none at all.

The insecurity of economic life and the conviction that this generation is creating hopelessness for the next has cast this aura of precariousness over the continent. The forms of contemporary architecture and design suddenly seem emblematic of the precariousness and instability of lived life. while constructions such as the Renaissance Pitti Palace in Florence and France ’s great Romanesque cathedrals reflect the enduring certainties of the past.

Bewitched by the modern, people have been blinded to what was happening around them. Post- World War II Europeans bathing in continual progress were unaware that new forces were gnawing away at the foundations of real life. Like Americans, they didn’t know what was happening, and they carelessly delegated authority to the political caste out to get them.

Labour is precarious when one of the following conditions is present: low pay and uncertain wages, inadequate job training, the absence of social insurance, scarce health protection, deficient work site security, absence of trade union representation, insufficient notice time before the pink slip of dismissal. Today, nearly all these factors are inadequate or absent for European workers.

Precariousness spawns sensations of transience. As a result, indifference grows, especially in the anarchic country of Italy dominated by its authoritarian leader, Silvio Berlusconi, who detests rules. Over much of Europe the rich know no limits and don’t give a damn for the rest. Imprisoned in cages of worry, anger, fear and pain, the poor don’t care, either, as Italy sinks under its garbage it can’t organize to collect and dispose of. Cities suffocate in smog. Traffic is unbearable while a negligent government fails to provide decent public transportation. People instead remain voiceless, almost invisible. Then, from time to time, a spark here and there, a flickering in the darkness, becomes a flash fire threatening to illuminate the germ of resistance.

General strikes and protest manifestations sweeping over France from Paris to the port city of Marseille underline the epidemic proportions of the desperation ignited by precariousness. The gigantic protests take place within the framework of growing job losses, the deepening economic crisis of the capitalist system, and the erosion of social rights. In France , protest is directed against the aims of the hard right government of Nicolas Sarkozy to bolster the capitalist system and further reduce workers’ security.

The birth of the idea of United Europe at first seduced the majority of two generations of Europeans. Now that dream is going up in the smoke of capitalist greed. Today’s United Europe is not what European peoples had in mind. It is not a union of the peoples but a clique of multinationals-capitalists. The EU is anti-labour, anti-union, anti-welfare, pro-free trade, and stands in awe of President Obama and the USA . It supports NATO and the American war in Afghanistan , which the EU considers a good war. People wonder if the European Union was not the long-range project of capitalism from the start.

Early dreamers and builders of Europe like Jean Monet and Robert Schuman were probably not as far-sighted as we credit them. Their alleged aim was to harness nationalism, without subjugating nations. They proclaimed intentions to build an economic community based on free trade to enhance Europe’s world role, resolve the German-French problem, and prevent future European wars. But it didn’t end there. The official names of the Union reflect mutating goals and capitalist hubris: from the modest European Coal and Steel Community to the more ambitious European Economic Community (EEC) to European Community (EC) to the realization of today’s capitalist fortress, the European Union (EU).

Europeans like the idea of being citizens of Europe, as printed in their passports and reflected on their automobile plates. Travel from Milan to Munich to Paris to Amsterdam without a passport and using the same currency is appealing. What a hassle it was once! —visas and changing currency at every border. But a preferable, wonderful hassle, some people have come to think today, now that the multinationals have taken over! Now that jobs and industries wander from one country to the other in search of cheaper labor. No wonder radical nationalism has emerged in every country and the words protectionism and nationalism have again become current.

The European Union of today aims at a different kind of Europe. An Europe of multinationals. An anti-social Europe in opposition to Social Europe. The Social Europe that matured over a century, a heritage more significant than the “Christian heritage” advocated by the Catholic Church. There is nothing more useless than the scenes of the huge, UN-like theatre of the powerless European Parliament in Strasbourg rubber-stamping the demands of the anti-social European Commission.

Today the EU aims at a real President. Not however a President elected by the people of Europe but a straw man appointed by the Eurocrats of the European Commission. It proposes reducing the number of EU commissioners from the present one from each member state, freeing the hands of a few capitalist front-men to complete the regimentation of Europe in which the rights of capital grow and those of labour diminish, to privatise further public services such as education and health, and to crush the labour movement. These aims constitute the corporate order for the fascistization of Europe along lines traced out by Benito Mussolini early last century.

Key words today are: banks, market, competition, liberalisation, privatisation, capital. Words indicative of the reconstitution of pre-totalitarian directions. These words also occupy the proposed European Constitution voted down by France, The Netherlands and Ireland, thus blocking its enactment until now. No wonder a growing number of European citizens are increasingly in opposition to the EU. A survey shows that the average favourability rating of the EU stands at 48%. People see less advantages for themselves in this new Europe, which has resulted in higher prices and lower wages. As one Roman wrote in to a newspaper, for workers the crisis means “low-cost wages and business class living costs.” No quid pro quo here. European travel without passports is not enough compensation.

Today’s precariousness stands like a mountain between the EU and its citizens. EU failures are capitalism’s failures. The European Left has outlined some basic, short-term, alternative objectives: work for all and an unemployment rate of below 5%; a society based on solidarity, with poverty under 5%; a roof over everyone’s head; equal opportunities with an illiteracy rate of under 3%. The European Central Bank (ECB) should not only fight inflation but should also support economic development. The EU cannot be based on the market alone. Commercial policies of the Union must aim at the reduction of inequalities, at solidarity and stable economic development.

People wonder what kind of world will emerge after the crisis. Will there be a new start? Others speculate on the disappearance of today’s savage capitalism based on exploitation and expanding markets. But can one really expect the phony and virtual to become authentic and real over night? That capitalists will reform themselves? I don’t believe so. Not if the same people who played a major role in screwing up the world are to put it together again.

Gaither Stewart, Senior Editor and European Correspondent for Cyrano’s Journal Online, is a novelist and journalist based in Italy. His stories, essays and dispatches are read widely throughout the Internet on many leading venues.