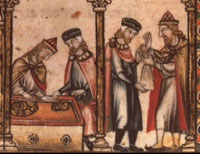 Is Europe headed for a new Middle Ages? On the basis of some disquieting signs, I should say it is indeed. Politically, it seems to be in the midst of a process of further disintegration.

Ten years ago, in The Rise and Decline of the State, the Israeli military historian Martin van Creveld was among the first to suggest the world was headed towards a new Middle Ages. The European Middle Ages are characterized by international political instability and endless wars. A modicum of spiritual and ecclesiastical control was exerted by the Pope in Rome, while the German Emperor could sometimes wield political pressure to restore order. Fundamentally however, disorder prevailed.

The impending collapse of the nation state.

Now look around you, what do you see? Some of Europe's major nation states are governed by men who are little more than clowns. Take Gordon Brown, for instance. Is it possible to find a more laughable figure than him? Heading a bankrupt, pauperized nation where all residual wealth is concentrated in and around London, Brown still has the gall to lecture the rest of the world on how to run an economy. Even Italian premier Berlusconi, regarded by many Anglo-Saxons as a frivolous imitation of his famous predecessor whose last name started with an M, looks more serious after somehow rising to the occasion during the recent earthquake disaster. As for French president Sarkozy, the odour of boyish amorous adventurism and lack of focus still surrounds him and makes it difficult to regard him as a serious statesman. With the possible exception of Mrs. Merkel the German Chancellor, most other European leaders are pathetic mediocrities who do not even manage to produce a benevolent smile on any observer's face.

And mind you, with political power still ranking among the choicest of fruit in the basket of what life has to offer in the way of rewards, European leaders have risen to the surface after a lengthy and laborious selection process. They represent the best that Europe's ruling elites have to offer. And that is quite worrisome indeed.

At a time when most European states are confronted with centrifugal forces within their own borders, there is no politician who has proved to possess any superior qualities that would enable him to solve a major political calamity. The opposite is the case, since so far, no one has showed any aptitude to handle the current economic disaster.

According to the most recent European report on terrorism, some 90% of terrorist acts are perpetrated by nationalist and separatist groups. Of these, there are many in Europe. So far the most active and most violent have been Northern Irish (IRA), Basques (ETA), Corsicans and South Tyroleans, but there is no guarantee that other groups may not turn to violence. These other groups include Scots, Bretons, Bavarians, Catalans and no doubt man, many more. The current economic crisis, that looks like it will not disappear anytime soon, may very well cause these and other groups to seek to attain their goals by violent means.

At any rate, the map of Europe is likely to undergo further changes in the coming years as many more nations may be breaking up. The future map of Europe may actually look very much like a map from the Middle Ages.

The decay of standard language.

The major languages of Europe have only become truly “national” and “standard” languages, spoken by a majority of the population, in the course of the past two centuries. These languages have largely been replacing the bewildering number of local dialects spoken all over the place. It may come as no surprise to learn that during the past few decades, these local dialects have been growing at the expense of the national “standard” language. Whereas only a generation ago command of the standard national language was an essential requirement for any sort of economic and social ascent, today one may very well land a good job even if one merely mumbles some regional gobbledygook. In fact, local dialects everywhere are being given a higher status by national and EU authorities. National languages are retreating, a process that is reinforced by the advance of virtual illiteracy. Though there are currently no good, reliable statistics on virtual literacy, the situation in Europe may not be as alarming as in the US, where up to one third of the adult population should be considered virtually unable to read. This has been brought about by decades of watching mind numbing television shows that appeal to the basest of instincts and satisfy the simplest of tastes.

The decay of public safety and security.

The return to the primitivism of the Middle Ages has already been accomplished by millions of Europeans. It has certainly made it easier for the millions of poor immigrants from the Moroccan Riff Mountains and the remote vastness of Turkish Kurdistan to find a congenial environment that hardly requires any adaptation. I should say these newcomers are uniquely equipped to survive in the coming new Middle Ages. Coming from primitive mountaintop villages where the law of the jungle rules, where literacy is unknown, where blood feuds are the order of the day, where women have no rights and wives are beaten daily, the newcomers soon feel themselves right at home in the heart of once civilized Europe.

Perhaps without realizing it, native Europeans have also been long preparing for the coming second edition of the Middle Ages. For decades, they have been fleeing the big cities, settling in the suburbs. Today, the public space in Europe should only be entered with the greatest caution. Even in broad daylight, many neighbourhoods are unsafe, let alone after dark. You may only venture with reasonable safety in the main shopping streets, but please, do not stray too far from the crowds. Even in the shopping districts, you should be careful not to talk back to anyone, because you risk being seriously wounded by some frustrated, aggressive moron.

While many of Europe's inner cities are being transformed into virtual war zones, where one cannot walk about after dark, security is becoming a top priority. But it comes at a price. For decades, European governments have been reneging on their commitment to provide security in the public space. Those who want to be safe absolutely need to install costly burglar alarm systems in their homes and shops, put up CCTV cameras everywhere and hire private security firms that are doing brisk business. Citizens pay their taxes (often up to 60% of their incomes), but they get little in return. Safety and security have been privatized and increasingly only the rich can afford these luxuries.

One way to cut the cost and to make security more efficient is to take up quarters in a fortified condominium or in a gated community. These are now being built all over the place. In some places, new housing developments near motorways are being surrounded by high earthen walls and palisades to keep out the sound of traffic, but at the same time these walls serve as a protective barrier against prowling delinquents from the inner cities. These gated communities are the modern equivalent of Europe's medieval walled cities, whose gates were locked at dusk to keep out the villains.

Those who really can afford to, leave the country altogether. Hundreds of thousands of British subjects, Dutch and German citizens are leaving every year to take up residence in Spain, Bulgaria, Italy, France, Portugal, Croatia, basically anywhere they find cleaner air, a safer environment, and a better climate. Once the latter may have been the main motive for leaving, but increasingly it has become a justified concern for security.

Thus, what we see happening in Europe is the inexorable breakdown of national states, the unstoppable erosion of the legitimacy of the state (that cannot even protect its own citizens), and the citizens voting with their feet.

The only thing we are waiting for is the return of chivalry and the power and influence of the Church. After all, if life was worthwile during the Middle Ages, it was often thanks to the protection of the armed nobility (often armed also with a sense of responsibility) and the Church. If threatened, one could always seek refuge in a Church. However today, even that would not be easy. Many churches are being torn down or transformed into bookstores, cinemas, night clubs or whatever. As for chivalry, it seems hard to believe that the bosses of the Sicilian Mafia, the Neapolitan Camorra, Dutch drug lords or German brothel managers will somehow morph into a new feudal nobility, but of course, nothing is impossible. These criminal groups are the only ones (apart from the army and the police), trained in the use of weapons and accustomed to use them. If a new armed, feudal nobility will come into existence, it will recruit its members precisely from these groups.

I am afraid Europe will be an unsafe place for many, many years to come. The New Middle Ages have arrived!