When social reality is illusion and illusion is real 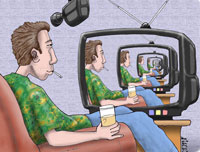 When social reality is illusion and illusion is real

At certain points in history we encounter a strange reversal of normal conditions.

Today we face a social and global reality which is false, it is material and physical and tactile. We can touch it and feel. It is a “system” and yet it is false. Our reality is untrue.

This reality controls our lives, it makes us miserable, it makes us do things we would rather not do. This reality sets the rules of the game and forces to play. We are told to accept this condition because, well, “it is reality” and “you must be a realist”. So live with it, don’t complain or dream, and, more, excel at this reality and succeed! Beat all comers. And who cares what happens to them.

But why? This reality is an illusion because it is built on false values, ethics and principles. It is an exterior illusion, not an illusion of inner realm, of the fantasy mind, but an illusion outside of your mind. Let’s call it an “ext-illusion” – it is definitely material and real but completely untrue.

This present reality of social systems and a global system is the farthest from ideals that the human race has been for a while. The vast majority of human beings suffer in this so called “reality”, in this ext-illusion. This tangible fallacy benefits only a small handful.

Idealism and realism, ethics and systems, dreams and pragmatism have fought throughout history. And today “realism” is beginning to lose. And idealism is starting to win. Fantasies, imagination and abstractions are gaining favor, the naive is getting a second hearing, the ethereal is developing weight, texture and force.

When reality is thoroughly false and ideals are real, then people will soon act because the contradiction is too great to bear. Ideals will be translated into new realities, then ideas will become exterior realities, and the ext-illusions will be tossed into the waste bin of history -- one in which the contents will NOT be recycled for any reason!

A new wave of activism, both personal and social is coming; it will build new material things that are good, true and beautiful.

In the beginning of the 21st century we are entering a period of radicalism. Radical new ideas about economics, government, foreign policy, personal ethics, education, media, education, healthcare, psychology, the spirit, art and many more things are appearing, and these new ideas will accelerate and accumulate.

Perhaps a new civilization is being born, one based upon new principles and encompassing the whole of humanity and not a select few. Experiments will done, and an embryonic culture is coming.

The creation of a new world requires great creativity, thus, creativity must be something that we must study and acquire. And this will not be found in existing systems. Creativity is something a movement will have to explore and teach to itself. And this creativity will come in two forms: the personal creativity of an individual, and the social creativity of groups. Each form demands its own rules and methods.

When we have learned the lessons of creativity then we can push ahead the new world with greater power and speed.

Fredrico Fellini, the Italian director, said something that is relevant to this discussion. He remarked that “the visionary is the only true realist”.

What did he mean by this? He is saying that all reality is created by human beings. It is not given to us by another entity or force. We make the reality that we live. And it comes right from our imagination and creativity. Reality begins first in someone’s head, whether it is the first wheel or first stone tool or a new education system or new healthcare system.

Mother Nature gave us all right brains, very few people actually have vacant spaces in the right side of their heads (though we suspect some do...).

Why this gift? Because in our long and difficult evolution as a species we were forced to be creative over and over again. Otherwise, we would not have survived; we would have gone extinct long ago. The problem is that for long periods we sit on our laurels, and enjoy the fruits of our creativity, and do not keep creating, keep inventing. Then great problems develop and we begin to suffer. People take advantage of us. This is such an epoch.

Reality begins as an idea. And to create a new reality and new things, and not reproduce or imitate an old reality, there must be new ideas. The creative person generates these creations. One reality fails, then another reality must replace it.

Where does it begin? In your mind. Then it goes from the head to your computer monitor, to paper, to video, to an audiofile, to a song, and then to the world, from ethereal abstraction to concrete things.

Innoye is an American writer. You can contact him at his blog, or at his email. He is working on his upcoming book, “The Axxiad”.