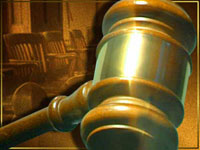 Rule 7 of the Federal Rules of Criminal Procedure has an added “Note 4” which directly conflicts with, ignores and willfully violates the fifth amendment of the US Constitution which states clearly: “No person shall be held to answer for a capital, or otherwise infamous crime, unless on the presentment or indictment of a Grand Jury”.

Note 4 of Rule 7 states: “Presentment is not included as an additional type of formal accusation, since presentments as a method of instituting prosecutions are obsolete, at least as concerns the Federal courts”. They rewrote the US Constitution to suit their own purposes.

There are only two ways that the US Constitution can be changed:

Method 1: A minimum of two thirds of the US House of Representatives AND a minimum of two thirds of the US Senate must agree on a proposed change to the Constitution, AND then a minimum of three quarters (38 of the current 50) of the state legislatures OR state conventions must agree to every word, comma, and period of the proposed change to the Constitution. Passage in the state legislatures is by simple majority in the state House AND in the state Senate. Passage in the state conventions is also by simple majority. Typically, a time limit of seven years is imposed for ratification, after which the proposal expires, worthless. This is the only method that has been used to date. The requirement for a state convention has been specified only once.

Most certainly a bunch of crooked lawyers writing their own rules to corrupt the jury system can not override the US Constitution.

And, as Susan Brenner wrote in The Voice of the Community: A Case for Jury Independence, “Now, federal grand jurors cannot return charges in the form of an indictment without a prosecutor’s consent.”

If a grand jury and a courtroom jury have to do only what the judge and prosecutor say, and a prosecutor can refuse to indict and charge a politician or another lawyer, what is the reason to have any jury? Only to perpetuate a myth that Americans live under a system where no man is above the law. There is no other reason.

As the American Judicial system now operates, judges and prosecutors can pick and choose who they send to prison. And they guarantee that they and their friends can go on with their criminal behavior unmolested.

The American Juror published a commentary regarding Note 4 of Rule 7: [Retaining the Constitutional Right of grand juries to determine evidence and witnesses] might encourage the use of the run-away grand jury as the grand jury could act from their own knowledge or observation and not only from charges made by the United States Attorney(Prosecutor)”

So, the American government employees took the bold step to violate the US Constitution on a continuing, repeated basis and gave defendants a “jury of their peers” that would and could, only nod to the prosecutor and judge and say only, “Yes sir. No sir. You’re right sir. Whatever you say sir.”

This kind of behavior was outlawed in the year 1215 by the English Magna Carta, which the founders of the United States of American adopted as their basis for how Americans were going to live and be treated by the government that they would employ.

The authors of the Federal Rules of Criminal Procedure are the true criminals and should have been dragged out of their homes and hanged from the nearest tree.

Now, 63 years later, the American people are fed up with the treasonous acts of their government employees and their rigged courts. And they have found a way to rid this country of the “domestic enemies” that our Constitution warned us to be prepared for.

AmericanGrandJury.Org explains the process and how to form a constitutionally acceptable Common Law Grand Jury and bring presentments or indictments in any location in America and begin prosecuting corrupt government employees, at any level of government. No longer should they be referred to as Officials or agents. They are our employees and if they don’t want to respect that, they need to find a friendly 3rd world country to live in.

Mr. Carl Swensson of the State of Georgia successfully organized a Common Law Grand Jury and that Grand Jury reviewed evidence against Barry Soetoro AKA Barack Obama and is recommending an indictment. The US Attorney, who was presented with that recommendation has refused to discuss it by saying, “We only deal with lawyers”. The Attorney General’s office of the State of Georgia has also been presented with that recommendation and has also refused, saying, “We don’t represent citizens”.

Everyone should call US Federal Attorney, David Nahmias at 404-581-6000 or fax him at 404-581-6181 and tell him to do his job. Every person should also call the State of Georgia Attorney General’s office and ask Lilly Thomas why she thinks the Attorney General does not represent citizens and who do they represent. Her number is 404-656-3300.

A 2 hour Internet radio broadcast on April 9, 2009 has Carl Swensson of www.RiseUpForAmerica.com, Bob Campbell of http://americangrandjury.org and the spokesman for American Grand Jury, Sam Sewell explaining the Grand Jury actions against Obama, how Grand Juries can be used to rid local communities of corrupt government employees and how citizens can form their own Common Law Grand Jury groups.

Please allow a few minutes for this show to start playing American people are uniting, from the Atlantic Ocean to the Pacific Ocean in the form of “Tea Parties” named after the Boston Tea Party demands of “No Taxation Without Representation” in the year 1773, which helped start the American Revolutionary War with England in 1775. Tea parties are being held for people to object to unconstitutional government acts, taxes and loss of freedoms.

In less than 30 days, demonstrations have been organized and are scheduled in 2,000 communities, starting April 15, 2009. Anyone can find information on where Tea Parties are being held or how to form your own Tea Party at http://www.freedomworks.org/

Something World leaders had better understand and understand well: Obama and his mentally deranged friends are not going to destroy America any more than countless other socialist fascist fanatics have tried in the past.

If World leaders want to keep their jobs and keep their nation’s economies intact, they would be smart to drop Obama like a hot potato. Obama and his backers are pulling a giant scam on the rest of the World, just as they have on American voters.

Americans have wised up. It is only the major media that keeps pounding the drums of the Obama lie. Ask yourselves a question: Why are many of America’s major newspapers that have been in business for over 100 years, filing for bankruptcy and closing every week? If you believe, as major news tell us, that the reason is lowered advertising revenue and more people getting their news from the Internet, you’re hallucinating. The real reason is because Americans are thoroughly fed up with the lies, the slanders, the politically correct brain vomit that major news pours out and their astounding absolute refusal to portray any semblance of the truth.

Nothing Obama does will continue. Everything he does will be retracted by a very near future administration.

One thing that is certain, of all that can be observed about the current Obama administration, corporate executive friends of Obama and the American Judicial system: Whether in the boardroom, the courtroom or the bathroom, scum sticks together. When the scum is annoying enough, it is scrubbed, cleaned and thrown in the trash. That’s why people have cleansers and society has prisons.

World leaders are making a very dangerous mistake to think that we, the people of America are not making preparations for cleaning house. This house belongs to us, not a gang of decrepit senile old men, pursuing a useless fantasy of a New World Order that has a 2,000 year history of abject failure.

Here’s your first clue: The very first line of the US Constitution says, “We the people……..establish this Constitution”.