Freedom of speech reigns no longer in Europe 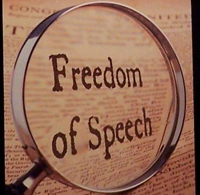 Freedom of speech reigns no longer in Europe

Whoever still believes freedom reigns in Europe is wrong. Yet since until recently it has enjoyed a reasonable degree of freedom, many people continue to believe Europe is still somehow “free.” The touchstone for liberty, the basic, most essential freedom, is always the freedom of speech. All other freedoms depend on it and are derived from it.

From the end of World War II till the 1980s, by and large there was freedom of expression in most of Western Europe. Today, Europeans have to be careful with what they say and do, because if they are not, they can be arrested, convicted and thrown in jail. This can only be the result of some sort of concerted policy on the part of all members of the so-called European Union, since the freedom of speech is being curtailed in all European states at the same time.

It is one thing for governments to condone the attempts by islamist fanatics to silence anyone expressing any criticism of Islam and its teachings. Through either cowardice, laxity or sheer opportunism, many Western European governments are very tolerant to verbal outbursts of islamist radicals. Thus muslim religious leaders are allowed to make the most insulting remarks about gays, women, Christians and Western culture. They are allowed to threaten gays and even worse, to beat them up. In France, muslim radicals are allowed to beat up butchers selling pork in neighbourhoods with many muslims and to terrorise the owners of bookstores not selling excusively muslim materials. In 2005, Theo van Gogh, the well-known Dutch film maker and outspoken critic of Islam, was killed by an islamist zealot. Needless to say, such incidents as the above, taking place with depressing regularity, have a tendency to make people shut up, to prevent them from speaking their minds in public. If they do, they run the risk of being accused of racism and discrimination, both punishable offences.

It is quite another thing for governments to enact legislation limiting the right to free speech. As soon as any government sets such limits, free speech is banned altogether. At that moment, freedom is effectively gone. For example, article 1 of the Dutch constition, prohibiting any kind of discrimination is phrased so broadly that whoever tells a joke in public must watch out.

In some European countries (Belgium, France, Germany, Austria), the government has virtually outlawed certain kinds of historical research. It has been made compulsory for all to BELIEVE that six million Jews were murdered by the Nazis during World War II. Even if some scholar would be able to demonstrate that, instead of 6 million Jews, 5,5 million were killed (as some could still assert until recently), he would be prohibited by law from saying so in public. Anybody wanting to do research in the field of the extermination of the Jewish people during World War II is branded an antisemite beforehand. Ignoring laws on World War II historical research can land one in jail. In 2006, an Austrian judge found British historian David Irving guilty of publicly denying, belittling and justifying Nazi crimes. Irving was sentenced to three years in prison, but released before the term was completed. One should by all means read the web site of the Anne Frank House at Amsterdam to get an idea of the totalitarian character of opinions currently prevailing in Europe on World War II historical research.

Recently, freedom of speech (or what is left of it) in Europe has been suffering yet more crippling blows. In Denmark, six young people selling T-shirts imprinted with a political message were found guilty of financing terrorism and sentenced to jail terms of up to six months. They intended to hand the proceeds to political movements abroad, one in Colombia (FARC) one in Palestine (PFLP). These two movements have been declared terrorist organisations by the EU and whoever is caught helping them in any way, has been made punishable. The EU list of terrorist organisations still contains no more than a few dozen names, but the list could conceivably be extended willfully under the loose terms used to define terrorism. It is easy to see how this practice would limit political activism in Europe, and thus also put curbs on the freedom of speech.

In Britain, the modern reincarnation of the old GDR, with a government that is pathologically obsessed with controlling its subjects (in Britain, one is NOT a citizen!), earlier this year a young student was arrested for chalking a harmless message on the pavement. All that 23-year old Paul Saville did was write: “Liberty. The right to question it. The right to ask: “Are we free?” Then he was arrested and booked for damages.

Of all European countries, freedom of speech is most curtailed in the Netherlands. Currently governed by a clique of corrupt, ultraconservative Christian fanatics, the country is being turned into a replica of John Calvin's 16th-century theocratic dictatorship at Geneva. Almost a year ago to date, the Dutch minister of justice (a frustrated zealot suspected of frequenting sadomasochist paedophile clubs) ordered the arrest of a political cartoonist for insulting religious groups and incitement to hatred. The arrest was carried out in true Gestapo style, by a dozen policemen in the middle of the night, but the cartoonist was released after questioning.

Dutch MP Geert Wilders, a supporter of absolute freedom of speech (including the right to insult and to ask unpleasant questions) has been indicted for incitement to hatred for his outspoken remarks about the nature of Islam. A few weeks ago, Wilders was barred from entering Great Britain because the Home Secretary considered him a threat to national security.

What has Europe come to? It seems it is busy reinstating laws and practices associated with the numerous national socialist, fascist and corporatist regimes of the interwar years and World War II. However, if this comparison is too offensive for sensitive and incredulous European ears, let us compare present-day Europe to the France of minister Guizot and the early years of Emperor Napoleon III. Or to the Austria of Prince Metternich. Indeed, it would seem Europe has returned to the days of the most repressive and sinister regimes of the 19th century.

In the light of Europe's current lack of free speech, one wonders how on earth European politicians could think they have a right to criticise and lecture other countries for violating human rights? The most basic human right is the right to free speech. It is plain for all to see that Europe's own record in this field is absolutely abysmal.