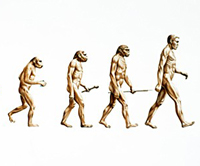 Humane sentiment is weakened and dissipated by being extended over the impersonal social distances of mass society. This sociological formula accounts for much of the world’s evil. The vast majority of people today live in class society, with its attendant hierarchy and injustice, but biologically man is suited to the hunting-gathering band, since he spent most of mammal-primate-human evolution in that “society.” Man is not biologically civilized, and his further progress in mass society will depend on his social adaptation to it—as opposed to the now-dormant biological and genetic adaptation.

From a bio-evolutionary perspective man should never have expanded beyond the hunting-gathering band. He spent 65 million years as a mammal and just 40,000 years as a human being, and “our most recent genes derive from that longest segment of human history during which men and women lived in hunting and gathering societies.” (Which might, as a technical note, be called “hunting-gathering-fishing” to emphasize the importance of fish to subsistence.) Thus, “over 90 percent of human history was spent in hunting and gathering societies.” The result is that man’s predisposition is ill-suited to living in close quarters with thousands of hierarchical groups. Man is usually kind with those whom he personally interacts—atleast as a generalization and within certain limits.

But on the other hand, he is innately distrustful of or hostile to strangers, and in mass society the vast majority of people are strangers to one another. Hence, Jean-Paul Sartre could write that “evil is the product of the ability of humans to make abstract that which is concrete.”

The fact that the social classes do not mix demonstrates class antagonism and the rigidity of social conventions. Class antagonism, in addition, is accompanied by intraclass antagonism, or competition, as the members of the lower classes have little class solidarity and grimly compete with one another. Their lack of solidarity is the despair of socialists. There is no “brotherhood of man,” since in no nation is there a unified classless society.

If bio-evolution had somehow provided man with innate cooperativeness, even in the face of crowded conditions, there might not be hierarchy or hostility to outsiders. Racism and the universal formation of classes show that—however much humans cooperated in less crowded societies—competition is the rule in mass society, which is often characterized by millions of people technically united by a culture but actually divided by class and intraclass competitiveness. The consequent social warfare is what I call territorial crowding. Population explosion, whose origin is partly shrouded in the mystery of the prehistoric agricultural revolution some 10,000 years ago, has produced what one writer calls the “human zoo,” wherein one might “reconsider the idea that ‘the law forbids men to do only what the artificial conditions of civilization drive them to do,’” and posit that the law “counteracts the distortions of supertribal [i.e., mass societal] existence and [attempts] to maintain in unnatural conditions the forms of social conduct natural to the human species.”

In the hunting-gathering band, sheer numbers precluded class formation. In contrast to mass society, it had a simple division of labor based on age and sex. Conflict in a hunting-gathering band, which usually had about 25 members, was minimal. Of course, murder, assault, rape and theft were not unknown, but so long as territory was plentiful, the band remained small and conflict was kept in bounds. Disputes were settled through face-to-face interaction; there were no institutions. These technologically simple bands of dignified men and women—despite one’s biased notion of civilization as a city, which stems from the ancient Greeks—judging from the few remaining bands, led rich, peaceful lives. They had no need of artifice or all the property which socialists at any rate consider theft or appropriation.

Whereas in mass society “man is a political animal” (Aristotle), an anthropologist writes that “in most [hunting-gathering] societies older males who are good providers gain the most respect, but they have no political power.” The population of mankind grew rapidly some 30 centuries ago, which in bio-evolutionary terms is inconsequential. Evolution had prepared him to live in small bands, but he outpaced socially his inner biologic heritage. The remaining hunting-gathering bands—such as the Bushmen of the Kalahari, the Australian aborigines and the Inuits of the Arctic—are headed for extinction, being overwhelmed by mass society, the worldwide population of which is 7 billion and increasing geometrically!

The sobering conditions of territorial crowding wreak havoc on man’s adaptation to society. “The human animal,” writes the zoologist, “appears to have adapted brilliantly to his extraordinary new conditions, but he has not had time to change biologically, to evolve into a new, genetically civilized species.” Social interaction is corrupted by institutions; in the class and status hierarchy, the rich dominate the poor, men dominate women, masters dominate slaves, whites dominate blacks. People are born into a corrupt world full of injustice and conflict; “life isn’t fair,”said one member of the upper class, who knew, as he had inherited a huge fortune. The equality of prehistory is gone, hopelessly lost in the teeming millions. In its place have arisen exploitation, slavery, warfare, human sacrifice, genocide, decimation and class oppression in general—all of which were impossible in the hunting-gathering band of some 25 souls. But if born into a free hunting-gathering band, that same tyrant who rules over millions of people in modern society would have grown into a peaceable man.

Hunting-gathering-society theory thus states that any “democratic” government is illusory by the very fact of having government. The people do not rule in a democracy, a governing class does. Notwithstanding its ideology of democracy, a democratic nation is governed not by the masses but by an elite. A truly democratic society is controlled by the masses through, for example, rotating councils of workers and is classless (although not having perfect equality of financial means). The fact of impersonality in mass society leads to what I call the following. Since men cannot deal face-to-face with everyone else or with representative groups in their society, they deal in terms of symbols and institutions that have the following as their de facto basis. A following is a category of people who are willing to act on behalf of a person; the members of a following need not know either one another or the head of the following. The rich and powerful have large followings, and the poor small followings. Behind the pseudoconsensus of a culture, followings are always clashing. There is no consensus, only the desire for power and the thwarted desire for power. The rich want to keep their large followings, and the middle and lower classes want to increase their modest followings.

Simultaneously men must somehow make a living. Many resources in a modern economy, however, are wasted on symbolic, nonessential status-serving goods in the furtherance of followings. Nevertheless, the economy will always remain the most important battleground of the bellum omnium contra omnes. One great cause of inequality generation after generation is the necessity of the poor merely to survive, rather than building a larger following. They are born into a world that is already divided into hostile classes, and even in an “open” society it is likely that they will die in the class into which they were born, the injustice and violence and symbolic violence falling in-between.

Twenty-five is the golden mean of the hunting-gathering band: This is the population of mankind’s primeval civilized society. But mankind burst through its extremely long formative era into the strange new world of overpopulation and chaotic conflict. In the shadow of socialism, world-government organizations, European unification, scientific enlightenment, and of stubborn old taboos, famine and potential nuclear war, it remains to be seen whether it can articulate and recover a lost golden age.

John Fleming is the author of Word Power: A Dictionary of Fascinating and Learned Wrods and Phrases for Vocabulary Enrichment (Such as Contumely, Danse Macabre, Junoesque, Kitsch, Palimpsest, Pecksniffian, Phlegmatic, Schadenfreude, Stoic and Zaftig). To purchase a copy, please phone in the U.S. 800-462-6420.