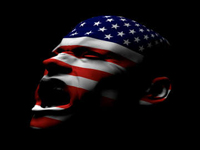 Poly-Thea means many theatres. America is lost in Poly-thea, in a world of many theatres, too many theatres. Millions do not know what “reality” is nor do they care, people are driven purely by “culture” - movies, reality shows, games...

This entertainment myopia has contributed to financial collapse, war and environmental degradation as we ignore all the signs of crisis that are around us.

In the current epoch everything is theatre. Theatre and entertainment have broken the old boundaries; they now invade all of life, all of our psychology. This arises because of affluence and free time, modern communication and modern consumerism. Polythea dominates not only our consciousness but also our sub-consciousness.

“Media vertigo” means media dizziness, modern media allows the possibility of a nonstop chaos and assault of communication upon the psyche of the citizen, that leaves one off balance making you subject to manipulation, diversion and molding.

The evolution of modern entertainment began in the first stage as relief, then entertainment came to the stage where it equaled life and competed with life, in the third stage it now trumps life, this is the age of Polythea in the 21st century.

Polythea has religious echoes. It seems to have a similar function to certain ancient religions of diversion and control -- religions that thoroughly filled the citizen’s mind providing a break with reality, a form of social and personal psychosis beneficial to ancient priests and royalty.

These old and original systems of delusion were preceded by a different kind of religious practice, the first religions of our race.

In the initial religious expression of the tribe, we have theatre, hymns, ritual, sermon, art, symbols, myths, ethics, quests and more all fused into one behavior. Shamans with diverse skills managed all of this and were accessible to all tribal members.

Only later does our conventional concept of religion arise where there are priests, magnificent temples, temple-kings, stylized rituals, and dogmatic doctrines, all of which are disconnected from people and everyday life.

While religion splits off from other behaviors, we also have the split of art and theatre into its own realm free of religion. These separate institutions which we now accept as normal are later developments.

In the paleo-religion we have a tangle or fusion of many behaviors and perceptions. We can call this a “Subsume”, a state where more sophisticated psychology has not emerged, a state of simplicity, but also a state where all things are connected and interrelated. In the Subsume all is subsumed; the world is whole, the tribe is a whole, and the brain acts as a whole. This is before the rise of complexity, specialization, sophistication, states, affluence and science, when the tribal religion breaks up and, in parallel, the tribal mind breaks up.

There were many good things about this religious subsume:

-many needs where served at once, everyday human needs

-the shaman was accessible to all

-art and creativity were given an outlet within the religion

-the issue of immortality was addressed

-emotional and psychological skills were taught

-rituals brought a joy of connection and love with tribe, with nature, with all creation

-issues of personal identity and quests were discussed

Interestingly, modern Polythea offers a one-for-one substitution of these benefits. It offers false immortality, false connection and love, false identity, false creativity, false ego, false power -- everything false because it is completely disconnected from the knowledge of these things. And it does so in its own unique, crass, manipulative, superficial and temporary way.

Today people are trying to return to this Subsume because both the modern church has lost influence and modern culture, in general, will not address these themes properly. So art and entertainment now are trying to fill the vacuum. Polythea steps forward to offer solace and wisdom. (And we note that even churches are moving toward mass theatre...)

A memory of the original religion exists; we are hardwired for this behavior that existed for the vast majority of our race’s existence. We are looking for this extinct theology to heal us.

Polythea seeks to eradicate your personal myth and substitute for it an entertainment myth that suits the entertainment industry and consumerism and political forces.

People accept this myth substitution because their lives are filled with misery and boredom and confusion. They have no identity because the culture will not help them evolve one.

When people begin acting according to the models of Polythea, a disorder arises that we can call “Thespia” -- the malady of acting as if you are in a Polythea production. And this includes a host of misbehaviors.

In theatre we have very emotional, loud and demonstrative behavior, this is the nature of theatre, however, this not usually the nature of life. But what Polythea does is to require that each person act if she or he was in a play or film that is over the top. The thoughtful and self controlled is not preferred, it is interior and silent thus is too boring for theatre.

Another form of thespia includes the violent and extreme duality of good and evil. In stories an author or director will present an idea in pure or absolute terms to make a point. But because the form of the message is extreme does not mean we must then act in these extreme ways, however, in Polythea this is required.

Further, a soap opera kind of psychology appears where the citizen cycles between good and evil in some sort of endless, tragic drama, where the individual has ceased to struggle for the good, for the soap opera star is so much more entertaining.

But this is not the end of thespia, the varieties continue...

Innoye is an American writer on the topics of economics, theology and philosophy. You can contact him at his email address, [email protected]. His new book, “The Axxiad”, will be available soon; his website, “newphilosophyandreligion.com”, is now under construction.