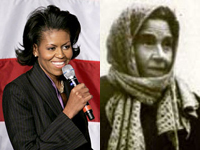 The beginning of springtime is a good moment to start a vegetable garden. As we all know, vegetables are a source of vitamins, nutrients and in order to maintain good health, we should all eat several ounces each day. Yet vegetables are not cheap, especially now that the Second Great Depression is upon us. During the past decades, US consumers have not exactly been blessed with a variegated choice of quality vegetables. In the US, vegetables look great, but have no taste at all, being the fruit of decades of genetical manipulation and mass production on plantations worked by Mexican and Caribbean illegal immigrants. These expensive goods are now fast getting out of reach of the average consumer.

On Friday, March 20, in an act of domestic “leadership”, US First Lady Michelle Obama has broken ground on the White House lawn for a vegetable garden. She was aided in this chore by fifty-five mostly black school kids from the Dictrict of Columbia. First Lady Michelle is quoted as wanting to set an example for all those US households in need of high-quality nutrition. A courageous and difficult task indeed! After half a century of feeding on an excess of grease, sugar, starch, additives, food coloring and proteins, regularly polluted with fecal matter and assorted germs, now the US people will find it hard to eat something normal and natural. But they shall have to, eventually, because there is no choice.

Now, I wonder, would First Lady Michelle know that she has quite an illustrious predecessor? Perhaps she has more historical consciousness than her husband. After all, speaking before Congress, he claimed that the motor car was invented in the US. Please do not laugh, the man was dead serious and we should rather be worried that such a historical ignoramus is president of what is still regarded as the world's most powerful country. Still, though the wives of powerful men are usually more intelligent than their husbands, I wonder if First Lady Michelle knows that First Lady Rachele, the wife of Italian dictator Benito Mussolini, also started a vegetable garden. I bet she does not!

I believe it was in 1941 when First Lady Rachele broke the lawn at the Villa Torlonia in Rome to start a vegetable garden. Her husband was a fanatical non-smoker, did not touch coffee and hardly drank wine, and he was an enthusiastic vegetarian. He really needed his vegetables since he ate little else. First Lady Rachele also wanted to show her “leadership” to the Italian people, who were beginning to feel the pinch of war, with increasing scarcities of all kinds of foods. Quite worrying is it not, this unsuspected similarity betweeen wartime Italy and the depression-ridden US?

Even more worrying are the political similarities between Fascist Italy and the present-day US. The US Congress has become as much a rubber stamp institution as the Italian parliament under Mussolini. Civil rights and personal liberties are now as much curtailed in the US as they once were in Fascist Italy. Whereas Mussolini was supported and paid by Italian big industry and banks, Obama is a puppet of Wall Street. Whilst Mussolini busied himself throwing modern bombs on poor, primitive villages in far away Ethiopia, Obama is engaged in the bombing of poor, primitive villages in far away Iraq, Afghanistan and Pakistan. Yet Mussolini considered himself a mighty conqueror. I do not know about Obama, but I wonder how he can look at himself in the mirror, knowing that he has ordered yet another massacre of poor rural folk someplace far removed from the White House. Does the man have a conscience at all?

To be sure, there are also differences between Fascist Italy and the present-day totalitarian US. Just take Obama and his deceased colleague Mussolini. The latter was a strong country boy, proud to show off his powerful biceps. Who has not seen the photographs of a bare-chested Mussolini lending a hand during the wheat harvest? Obama, however, looks rather like a coat hanger topped by a bony skull. On the picture showing First Lady Michelle breaking ground for the garden plot, her husband was nowhere to be seen. Obama is far from being a physical guy, not a sportsman. It seems the only sport he practices is bowling, but he admitted recently he was not very good at it. Mussolini on the other hand, delighted in sports that were then still considered to be elite reserves, such as tennis and horse riding. While Rachele was busy tending her vegetable garden, feeding the turkeys and the rabbits at Villa Torlonia, her husband would ride around in circles on his horse, dressed in a wife-beater to expose his sweaty muscles, jumping fences to impress the onlookers.

There is a bitter note to the US presidential family growing and eating their own vegetables. Unlike Mussolini, who in the 1930s dropped mustard gas canisters over Ethiopia, the US has since 1991 been firing depleted uranium (DU) munitions in Irak, Yugoslavia and Afghanistan. While mustard gas is a nasty killer, its effects are limited in time to the moments immediately after its use. It cannot kill people days, years, decades or centuries afterward. Depleted uranium is about half as radioactive as uranium, used for weapons or nuclear fuel, but that does not mean it is harmless. DU is used in armor-piercing shells in all calibers ranging from 5.56 mm small arms rounds to the 25 mm shells fired by the chain gun on the Bradley armored personnel carrier and the 30 mm shells fired by the gatling gun on the A-10 “Thunderbolt” aircraft. Some 15 tons of DU was dropped on Serbia, hundreds of tons of DU on Iraq in 1991 and hundreds of tons since 2003. The Afghan soil has also been polluted by the extensive and indiscriminate use of DU. So what?, one might ask.

Well, when a DU round explodes, the uranium ignites and minute quantities of it become amalgamated with dust particles that will first settle on the ground, then get blown around by the wind and are inhaled by people and animals. These small radioactive particles, giving off very low-intensity gamma radiation, also enter the food chain as they are absorbed by plants and as they seep into the ground water.

While neither the US nor NATO will recognize the devastating effect of DU on human health, in 2008 the Italian defence ministry officially recognized that DU causes cancer. This past January, the Italian government budgeted 30 million euros for the benefit of Italian military victims of DU contamination in the former Yugoslavia. But wherever DU rounds have been fired everyone, both civilians and soldiers, runs the risk of inhaling DU-dust and developing cancer. Mind you, the half-time of DU is about four billion years, meaning it will retain its current radioactivity for as long as there will be life on the planet.

Wide tracts of Yugoslavia, Iraq and Afghanistan have effectively been made uninhabitable and are still being made uninhabitable each day through the use by the US and its NATO clients of DU munitions. The people still living in such regions will develop cancers, and so will their offspring, if they are at all able to generate normal, healthy children. The number of cancers and ghastly birth defects in DU-ridden regions is already staggering. The people living there may be able to grow their own vegetables, but these will slowly kill them, just like the air they breathe each and every day. One must ask if healthy vegetables can still save them. I do not think so.

Nor do I think that First Lady Michelle will be able to grow enough vegetables to feed all the poor, needy Serbs, Afghans and Iraqis living in DU-infested regions. It would be the decent thing to do: like a true US housewife, she is bound to support her husband who, after all, was elected on his solemn pledge to change things. Nor, I am afraid, will First Lady Michelle be able to grow enough healthy vegetables with the help of the little black schoolchildren from across the street. I even doubt if First Lady Michelle's fifty-five little helpers will ever enjoy the fruit of their labor in the White House gardens. Like their slave forebears, they have been exploited. Exploited in two ways: by working for free and by being used in a cheap propaganda trick.