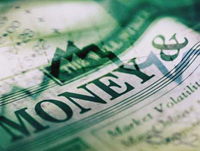 How would a metric or diverse economy have prevented the collapse in this situation?

First of all, public metrics on the basic and raw data would have flagged the bad mortgages immediately. Companies as part of financial leagues would have reported the honest, transparent truth.

And if leagues were hesitant, then consumer, investor and community leagues would have investigated and published information to all. Greed is not a value in a diverse economy. Overall metric health is the key concern.

Money operates differently in a metric economy. In the capitalist economy money is the sole measure. More, it is claimed as the true measure, and further, it is a total measure of all value!

But in fact, money is only a measure of supply and demand. Look at the rise and fall of oil prices. The Saudis pay $2 a barrel for their oil; we paid $147 last year. Supply and demand is the essential measure of money. More, if you examine the $2 per barrel cost, you will find even here that supply and demand determines prices of equipment, labor, maintenance and power.

There can be “objective” measures of a product for example but these would include scientific measures of labor time, materials, power usage and etc. But money and the real valuations in a monetary capitalist system have nothing to do with that, these are statistics for plant managers and engineers but not for CEOs or CFOs or MBAs.

The diverse economy has a diversity of measures and goal, that is, metrics. This set of metrics is more ethical, qualitative, practical and human than singular money. They demand not only higher standards but more standards serving the needs of consumers, investors, employees, communities.

Money sunders the “whole” of human values, the metric set in the form of some equation

will bring the “whole” back to us, and unite the whole of society through the leagues. The new MBA or “Metrician” of Business Administration thinks in wholes, just as the average citizen as investor, consumer, owner or worker must.

The metric economy utilizes a free market because a state system of investment decision making and product distribution is a disaster, as the 20th century has shown. Thus, we have buying and selling of products, securities and firms, but we use metric valuations for prices of goods or a firm’s assets and even salaries and wages. We merely introduce an additional dynamic in the marketplace having to do with the quality and standards of things. The existing market of buying and selling remains, the dynamics of price competition between firms remains, innovation remains and so on.

The exact formats for measure and combing measures with money are diverse, depending on schools of thought, specific industries and even general economic climate. Various equationsand approaches can be devised; even this is subject to our diversity and our endless creativity. But these are particular details of the mechanics within such a system, a subject for another discussion.

In this new economy, metrics will be ubiquitous, the government can even provide a

“GMP”, gross metric product, for the entire economy, and not just a current GDP which is monetary. A GMP summing up all of our metrics will give us a much better picture of our wealth, our “metric wealth” at any given point.

Further, fiscal policy is appended by the dynamics of the metrics. In a metric economy the role of government moves up to a higher level of overall national planning, overall fiscal policy, overall representation in the global arena, and overall regulation of critical national issues that industries themselves cannot provide. The government leaves metric supervision to the firms and leagues on the axiom that you “cannot legislate ethics”, even in the realm of economics you cannot legislate values.

The present crisis could give us a unique opportunity to use the power of the state to initiate changes toward metric economic behavior. The government could demand that financial, auto, housing and energy corporations begin using new metrics in their reporting in exchange for $3 trillion of the people’s money. Government equities obtained during bailouts could be sold on metric stock markets. The state could legalize and support the formation of economic leagues for industries, consumers, investors, employees and communities. All government contracts could require that companies use metric reporting standards. And many more ideas could be applied.

In this way the government could begin the reform of conventional corporations, and encourage the creation of a new movement of entrepreneurs, new corporations and cooperatives. The problem with the present administration’s strategy is that it ultimately has no power against CEOs or corporations. The state cannot run the economy because it is not a business, it must ultimately rely on the present power holders. Butwith a strategy of building a metric economy, one can create a second economy, a movement in civil society, forming a dual-economy situation. Further, one can create a battle in the camp of existing firms for control, a reform struggle waged by consumers, investors, employees and communities.

In this way the government can help the formation of a metric economy in civil society; then the state can remove itself as the economy returns on its new basis. Legislation would include temporary powers and deadlines for handovers.

A new economic system is coming. A primary principle of this new world is diversity --- diversity of ownership, a diverse market, diverse firms, diverse performance targets, diverse leagues. With these principles in mind, a metric economy will be built by people who are not greedy or selfish or power-seeking.

Innoye is an American writer on the topics of economics, theology and philosophy. You can contact him at his email address, [email protected] His new book, “The Axxiad”, will be available soon; his website, newphilosophyandreligion.com, is now under construction.