Faith and Credit, as per the agreement 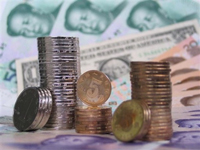 Faith and Credit, as per the agreement

Chinese Premier Wen Jiabao is worried. His country keeps over $2 trillion of its foreign reserves in U.S. Treasuries. He’s afraid that Obama’s big spending plans will weaken the dollar and erode the value of those enormous assets. Given the dismal financial state of the rest of the world, that’s a pretty high-class problem, especially for a devout communist. Jiaboa called on the United States to “honor its word, stay a credible nation and ensure the safety of Chinese assets”.

The Dalia Lama must have enjoyed at least a chuckle over the spectacle of any Chinese official lecturing anyone about credibility or honor. But grotesque hypocrisy aside, Beijing is indeed Washington's biggest foreign creditor and self interest as well as common decency dictates that debts ought to be honored, even if the borrowed treasure was acquired by the forced labor of millions, including women and children kept for decades in unspeakable conditions.

No one has cause to be sanctimonious. There is more than enough blame to go around. Governments of developed nations, from Tokyo, to Washington, from London to Berlin and from Moscow to Mumbai were all in the know and profited handsomely. But be that as it may, the bottom line is that the United States borrowed the money and the Chinese ought to be paid back as per the agreement. In fact, the full faith and credit of the United States Government demands it. But the key words are ”as per the agreement”.

For example, take gargantuan but nearly broke insurer American International Group (AIG) paying executives tens of millions of dollars in new bonuses even after receiving taxpayer bailouts of more than $170 billion. Whether or not anyone owns a single share of AIG, or pays a penny in taxes to Washington, the sense of smoldering outrage is practically universal. There is something about lavishly rewarding failure that makes human blood boil. But closer inspection of the absurdity uncovers the fundamental lie at the heart of predatory capitalism.

The argument goes that these millions aren’t being awarded for failure, but for the efforts of exceptionally talented managers. These gifted souls really had little control over the events that bankrupted their companies, wiped out their shareholders, and threw thousands of their employees out of work. But for them, things might have been even worse. It’s probably true that events, even great trends in the business cycle, had more to do with the demise of AIG than the decisions of any particular executive. It’s also true that the financial meltdown caught 95% of CEOs, investors, and even politicians completely by surprise. But then, the converse must also be true, that the windfall profits reaped in the best of times are no more due to exceptionally talented individuals than the failures of the bust years.

The blunt fact is that AIG probably has hundreds, if not thousands, of dedicated employees who could do the CEO and CFO jobs just as well. And that means that the tens of millions of dollars paid in compensation, even in the boon years, is nothing short of a restatement of the old doctrine of the divine right of kings. Yet in boardrooms across the country and around the world, on an annual basis, directors on compensation committees mindlessly mouth the same mantra, that somehow exceptionally gifted individuals are worthy of such hire. No laws are broken, no plots hatched, no veils of secrecy drawn. It’s all out it in the open, the bare, beating heart of capitalism as practiced in the West. And every lender, every borrower, every investor, everyone who owns even a single share of common stock or savings bond, knows about it and bought into this system along with its attendant risks, as per the agreement.

This goes for our Chinese friends too. When the leaders in Beijing decided to invest in US treasuries, they bought into the capitalist system. Like all investors, they didn’t do it out of kindness, but out of self-interest. US treasuries are perceived to be low risk and therefore, carry a relatively low reward, a mere 3 or 4 % return at best. That’s because it’s unthinkable that Washington would ever actually default on its debt. America is the most affluent nation on the planet and the world banks in its dollars. And at the uttermost end of need, Washington can always print more money.

So investors in US bonds can at least be sure of the return of principle, plus interest. It’s a sure thing, a low risk bet. But low risk isn’t the same as no risk. Investors who buy US bonds are betting, not only on the full faith and credit of the United States Government, but also on the genius of its people and on the vitality of the capitalist system. That’s nothing less than astonishing coming from communists, but again, grotesque hypocrisy notwithstanding, the Chinese are now in the same boat as the rest of us poor capitalists. And capitalism, at least the predatory kind practiced by Western governments in general and Washington in particular over the last decade, has failed as miserably as communism failed in the Soviet Union. Unfortunately for the Chinese, the bet didn’t come off and when that happens, all investors, even communists, lose. The good news for Beijing is that at worst, they’ll get their money back plus interest. The rub is what that money will be worth. In retrospect, The Chinese probably shouldn’t have bet so heavily on their American friends. They should have diversified, bought more gold for instance. Why they didn’t is a whole other issue. And after all, they could always sell. But whether Beijing likes it or not, the Obama Administration is going to print money. Lots of it! And as a result, the spending power of the dollars paid back to investors will probably be less. Live and learn.

There is a sad irony unfolding here that is unlikely to be lost on our friends south of the border. For decades, nations from Mexico to Argentina have struggled to repay massive foreign loans. The merciless lenders were in fact many of the same global banks, institutions and corporations now begging for assistance from taxpayers. When these nations tried to print money to cover their debts, the outrage from these very same capitalists and a supposedly kinder, gentler Washington was deafening, even violent. Demand for repayment in hard currency was accompanied by self-righteous lectures on corruption, the work ethic of brown people and the virtues of fiscal responsibility, even at the expense of inflicting untold misery on multitudes of poor and working class people. The coming currency crisis will be driven by governments of developed nations, from Tokyo to Washington, from London to Berlin and from Moscow to Beijing doing just what they scolded Latin America for doing; printing money like its going out of style. So from a certain point of view, the collapse of global capitalism is nothing so much as some semblance of justice in an otherwise utterly indifferent universe.

The Russian experiment with communism taught the world that human nature doesn’t abide dictatorships, even of the proletariat. The West’s experiment with predatory capitalism has now taught a similar lesson, that humans of the 21st century can’t abide the First Estate any more than their ancestors did in the 18th. And down through the centuries, throughout all these experiments with vastly different economic systems geopolitical realities still governed, as if in testament to how little human nature itself has changed.