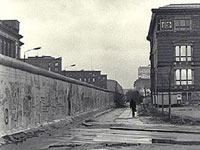 It is getting dark early, and although it’s almost spring, it feels like late autumn, less and less light each day, cold winds biting our faces as we turn instinctively from the wind ... when we ought to be looking into the wind, looking for clues to how to trim our sails and adapt to a world that will never be quite the same again.

In Berlin recently (I was there to keynote a conference for security, military, intel, police, talking about creativity, thinking about the ways we think) I met a friend for coffee a few blocks from the Reichstag in the former East Berlin. The coffee shop was dark, with warm cozy nooks and the best coffee I had in Berlin. It was reputed, my friend said, to be a hang-out for bad guys during the Third Reich, but that may have been just a story. More tangible, however, was a metal plate on the outside wall of the coffee shop, pockmarked with Soviet bullets that had taken out a machine gun nest when they took the city in 1945.

My friend was 18 when the wall came down.

He said, we knew the flaws of the system, knew what we didn’t like, but it’s all we had. Until the wall came down, it never occurred to us that it would fall.

He was inside the system, in other words, and however apparent the economic stresses were to outside observers, it was all he knew, and we humans adapt to whatever is around us, we assume that what was there when we went to sleep will be there when we wake up, despite what we know - the impermanence of all things, the certainty that all systems have flaws, masked by momentary strengths, and that every structure, every civilization we humans have built, will inevitably fall.

I have faith we will survive, another said. I just don’t know how.

To which I replied, the dinosaurs adapted. They became birds. But the finch, alas, outside my window doesn’t seem to remember the good old T-Rex days.

One can imagine that after sixty million years reclining in the tropical sun, dinosaurs never dreamed that a big snowball rock headed for the earth had something else in mind – a plan, if it was a plan, that wasn’t a plan, a happenstance, something that happened to happen.

In an art museum in Berlin, a guard, a Turk, walked up to me and asked, do you think America will go the way of the Soviet Union and break into pieces?

I asked if he had been reading the Russian economist who predicted that would happen in 2010.

No, he said, he was just thinking about what was happening.

The same question was implicit in my friend’s statement about the fall of the wall. Inside the system, one believes, it won’t happen. Outside, the system often looks ready to be transformed into something else.

A triceratops into a chicken.

Another question, too, has come up a couple of times. It was asked last night at the gym by a guy I had just met. Our conversation quickly went to real things, darkening skies and cold winds, and he said suddenly, I have gold at home. portable gold, like the chains the Vietnamese wore when they crossed borders with nothing else.

Where are you planning to go, he asked, if we have to leave?

A couple of years ago, another friend, a security expert, said with a conspiratorial whisper in the hallway of a hotel, hey, come here. We went off into a corner and he asked, where are you planning to go if we have to leave?

One preferred France, the other New Zealand. Of course, New Zealand and France might have something to say about that. Like Canada, which is intensifying scrutiny of the documents of Americans going there to work, because of the increased flow of people seeking medical care or jobs. Borders tend to become more porous when times get tough.

Those questions did not used to come up. Do you think the center will hold? Where will you go if things fall apart, if the streets ring with the wrong kinds of noise, noise that frightens not only children but parents ... where will you go, where will you try to go, that is, when the going gets tough?

The cityscape of Berlin brims with haunting reminders of the Third Reich and the Soviet occupation – with the history, that is, of most of the twentieth century. Turn a corner near the S-bahn on Friedrichstrasse and there’s a statue of children, suitcase open and empty. faces despairing, about to be taken to their deaths. Or cross an immense plaza near the Opera House and find in the center a plastic window looking down at empty bookshelves, a reminder of 25,000 books being burned on the spot in 1933. Or look at the largest remnant of the wall, see excavated cellars under the headquarters of the SS, and punch a button to listen to Himmler’s voice reminding people not to be soft and object to the murder of their “good Jew,” that friend they think should be an exception.

Here in America we do not have reminders of the slaughter, for example, of native Americans, brutality to slaves, or sites of internment camps for Japanese. We have theme parks, we have movies. we have video games, fantasy worlds without end.

All I am saying, I guess, is that we do need to remember, remember what happens to happen, so we have a chance for resilience, dignity, heroism, even, when the lights go out. when we hope the noises in the night are work crews fixing the power lines, when we hope things aren’t as bad as they look. When we hope that our leaders can make a difference, somehow, as we trudge through the bad news toward tomorrow.

When we hope that we, too, can make a difference, by refusing to be anything but our best selves. By refusing to do nothing when part of us wants to hide.

How do you go bankrupt? someone asked Ernest Hemingway.

That’s how the wall went down. That’s how the wolves of Wall Street stripped the skin from our bodies and from the body politic, too, with lots of allies along the way.

What they all had in common was the refusal to be aware of what they were doing. There were cracks, but the light didn’t get in. Now it is, a little.

But nothing is inevitable, as Marshal McLuhan said, if we contemplate what we are doing. Then we have options. That’s all I ask of our leaders, and myself, to have the courage to be aware, not to hide from consequences as certain as the seas rising when the ice melts, not to turn our backs on the one thing we humans have in bad times, the ability to respond to whatever life brings with courage, elasticity, and a willingness to see and then to act.

Richard Thieme (www.thiemeworks.com) is an author and professional speaker focused on the deeper implications of technology, religion, and science for twenty-first century life. He addresses the challenges posed by new technologies, how to reinvent ourselves (as individuals or organizations) to meet these challenges, and practical approaches to creativity, Email [email protected] for details.