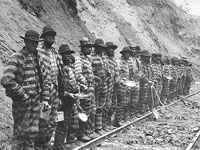 I am not African-American. I am Indian-American. I was born in India but I lived most of my life here in the United States and I am a proud citizen of this great country.

I am also a Christian. I converted from Hinduism when I was fourteen. As a Christian, therefore, I am deeply troubled that there are still quite a number of people who believe that there was a biblical justification for enslaving the black people of Africa. Those who hold to this view say that Noah, in the Book of Genesis, cursed Ham and that the black people of Africa being descendants of Ham were justifiably enslaved and treated with contempt. This belief is far from being extinct in our society so it is important that this belief is examined in the light of what the Bible actually teaches.

The particular passage in Genesis 9:25 has been grossly misinterpreted. First of all, Noah never cursed his son Ham. The actual curse was on Canaan the oldest son of Ham. Ham also had other sons but they were not cursed by Noah. The servitude (or subjugation)of the Canaanites occurred at various times in history under various rulers. Their ultimate subjugation came under the Romans (who were descendants from the line of Japeth) when the Romans destroyed their final stronghold which was the ancient city of Carthage (a Phoenician or Canaanite colony) in North Africa, thus fulfilling Noah's prophecy in Genesis 9:27 that Canaan would serve Japheth. The Canaanites were also once slaves of the Hebrew people (descendants from the line of Shem) who themselves were once slaves of the Egyptians and, thus, fulfilling the Biblical prophecy that Canaan's descendants would be a "servant of servants." The Canaanites were also at one time ruled by their brothers the Egyptians. Thus, the Biblical prophecy concerning the curse of the Canaanites had been completely fulfilled long ago.

Often people wonder how all the varieties or "races" of people could come from the same original human ancestors. Well, in principle, that's no different than asking how children with different color hair (i.e., blond, brunette, brown, red) can come from the same parents who both have black hair.

In reality there is only one race - the human race - within which exists myriad variations and permutations.

According to the Bible the ancient Egyptians were descended from Ham through the line of Mizraim. Ham had four sons: Cush, Mizraim, Phut, and Canaan (Genesis 10:6). The name "Mizraim" is the original name given for Egypt in the Hebrew Old Testament. Many Bibles will have a footnote next to the name "Mizraim" explaining that it means "Egypt." The name "Egypt" itself actually comes to us from the Greeks who gave the Land that name (i.e. "Aegyptos" from the Greek). In addition to the name "Mizraim," the ancient Egyptians also referred to their land as "Kemet" which means "Land of the Blacks." Western historians, however, say that the word "Kemet" refers to the color of the soil of the land rather than its people. But, the word "Kemet" is actually an ethnically derived term being a derivative of the word "Khem" (Cham or Ham) which means "burnt" or "black." Ham, who was one of the three sons of Noah and the direct ancestor of the Egyptians, was black. The Bible, in the Old Testament, repeatedly refers to Egypt as the "Land of Ham" (i.e., Psalm 105:23, 27; 106:22). The ancient Egyptians in their writings used their word for "black" to describe themselves and not just the color of their soil. Ham was named "black one" by his father Noah from birth. In other words, Ham was born black. His being black had nothing to do with a curse. The so-called curse of Ham was actually on Ham's son Canaan and not on Ham himself. This will be discussed later.

Regarding the ancient Egyptians, there is also considerable historical evidence, aside from the Holy Bible, that they were of Black or Negro origin. Even today the true Egyptian is not to be found in the cities but in the country sides and farmlands of Egypt. Most of the Egyptians in the cities carry a mixed ancestry of European and Asian, but mostly Asian from the immigration and invasions of various people into Egypt throughout the centuries. Very few people realize that Cleopatra was of Greek origin because the Greeks once ruled Egypt and she was descended from one of those Greek rulers. The true Egyptian found in the countryside, however, has dark brown to black skin and very pronounced Negro features. This is particularly true the further south one travels in Egypt. It was from the south that the original pharaohs and the people of Egypt settled the land. The original rulers and builders of Egyptian civilization were of completely Black or Negro origin.

An interesting piece of evidence showing how the ancient Egyptians viewed themselves is found in the tomb of Ramses III (1200 BC). On the wall of this tomb is a painting of four human figures. Each figure stands at a certain relation to the Egyptian god Horus. The figures that were closest the god were considered by the Egyptians to be superior to the ones positioned further away. Each of the figures is identified with a particular race or group of people with whom the Egyptians at that time had known. One figure is that of a finely clothed man with a dark red skin complexion having long braided hair and he represented the ancient Egyptians. Another figure is that of a finely clothed m black with woolly hair who represented the Black nations south of Egypt. Another figure is that of a finely clothed light brown-skinned man who represented the Semitic or Asiatic people.

It is important to understand, however, that the Negro or Black race is not monolithic. I realize that there are many scholars who make a distinction between being Negro and having black skin complexion because they take into consideration physical features (i.e. shape of nose, texture of hair, etc.) into their criteria for determining race and not just the criterion of skin color or skin complexion. However, these are all quite artificial criteria. In fact, the very classification of human races is in itself artificial since there really is only one race - the human race within which there are variations and permutations. Even the Bible has no terminology for race. Instead, the Bible refers to the divisions found in mankind in terms of tribe, language, or nation - but never race. However, since in our modern times the word "race" is so popular in designating divisions of mankind we are going to use the term. But, it should be kept in mind that there are wide varieties of characteristics even within a single race. Even among white Europeans, for example, you have varying shades of skin tone, hair color, and other physical traits or characteristics. The same is true of the Black race, but to a much wider degree.

DNA analysis of blacks in Africa confirms that African blacks possess a greater margin of genetic variability. It seems that black Africans carry a greater number of alleles - genetic variations of the same gene(s) in their DNA as compared to Europeans and others. Thus, it is not surprising that there are much wider physical varieties among blacks. For example, in Sudan, Somalia, and South India (where I am originally from) the blacks have more fine features. In fact, even blacks of ancient Nubia (also known as Kush) comprised individuals who had both straight hair as well as woolly hair. Just as whites have varying hair color (i.e. brown, red, blond, and brunette), so too blacks have varying hair texture (i.e. woolly, straight, wavy, and curly). The black aboriginals of Australia, for example, have curly/wavy hair.

Many of the aboriginals even have blond hair. Such is the wide diversity within the Black race. Ancient Egyptian statues and paintings depict a wide variety of these Black types. Also, in certain characteristics of language and culture ancient Egypt is uniquely linked to other Black cultures of Africa and this reinforces the Black identity of ancient Egyptian civilization since these unique linguistic and cultural characteristics are not found among Indo-European peoples. For example, the ancient Egyptians like their African brethren were matriarchal whereas Indo-Europeans were and are patriarchal. An exception to this were the ancient Etruscans of Italy.