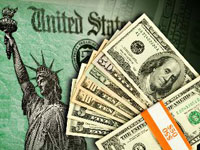 Economic stimulus packages, caps on rapacious executives and closures of illegal prisons notwithstanding, the most hopeful change signaled by the young Obama administration may be the rapid thaw in relations between Washington and Moscow. It heralds the fall of global elitism and a Washington again actuated by the interests of the American people. Potent is democracy and irresistible are geopolitical realities at driving human events. History, barely discernable from the half-truths and outright deceptions of the corporate-controlled media is formative.

The frosty relations that had threatened a new Cold War came at the burned fingers of global elitists who had commandeered the previous American administration. Russia, thanks to the clever Putin, refused to countenance a new colonialism. Foreign interests in general and British Petroleum in particular were summarily booted out of the country, sparking years of petty, puerile retaliations from London and the Texas mafia that controlled Washington. The response was so bitter and counter to the interests of the American people because the stakes for the global elitists were so very high. This is evident today in the dire condition of the British Empire.

Within a few years, North Sea crude will be exhausted and England will become a net importer of oil. Having spent the last decade living off their American investments, the British ruling class, in contrast to the Dutch or Germans, never bothered to develop national industries or a manufacturing base. So now, with their investments in America all but wiped out by the current banking crisis, their oil wells in the North Sea running dry, mountains of debt and no industrial base, the Brits are suddenly in deep trouble. They should have joined the EU when they had the chance, as soon as it became clear that they would not be permitted to plunder Russian oil and gas fields.

Americans, of course, will try to help our British friends, even under the Obama Administration. The bonds between the English speaking peoples of the Atlantic and the Pacific are so very strong that we all might as well be though of as the same country. While we don’t always like each other, like Californians and Texans, we are stuck with each other, rather indivisibly. But with the election of Obama, the American people have retaken Washington. And now, new policies, both domestic and foreign, will be formed around their interests.

For example, much of the criticism of the economic stimulus package currently before Congress is perfectly true. It is a vast, wildly inflationary scheme without guarantees that will hugely expand the Federal government’s role in the private sector. But there is no painless way out of this crisis. The powerful question is who will feel the pain and how much. All the rest is smoke and mirrors. The Obama plan will further erode the dollar, reward borrowers, punish lenders and call Wall Street to task for a decade of greedy speculation, ducking regulation and ruining everyone’s retirement. In other words, the new administration will try to recover for average Americans some of what the elitists managed to plunder. The Federal Government will again pursue purposes other than myopic protection of moneyed men. The entire financial system built on an unregulated globalization and predatory capitalism will come crashing down and something new, something fair, and something progressive will be created.

In an interesting way the current financial crisis nicely blends America’s foreign interests with Russia’s against international elitism. For example, nations like China and Saudi Arabia are without even the semblance of democratic institutions and have interests and cultures diametrically opposed to the West. In China, a group of gangsters, through ruthless exploitation of their own people and the manipulation of currency, has amassed trillions of dollars. With this capital, the thugs in Beijing have fed the fastest growing military machine in the world in a blatant bid to control Asia, southern Africa and the Pacific Ocean.

In the Middle East, while sitting atop the world’s largest supply of cheap oil, Saudi Arabia plays a dangerous and duplicitous game, courting American military strength to impose the House of Saud on the peninsula and deter enemies in the Muslim world, while at the same time maintaining her independence by keeping Washington off balance and pointlessly engaged. For obvious reasons, the rise of China must be alarming to Moscow, and Riyadh is a competitor to Russian engery and culture. These unfriendly (regardless of any double-talk) nations holding enormous foreign reserves (but amazingly, very little gold) will be weakened in the coming currency crisis.

Equally important will be priority adjustments on certain issues that have all but consumed the previous administration, but in which the United States has little real interest. The example nearest to Russia is the situation in Georgia. In one of its last temper tantrums, the previous administration sent war ships with “humanitarian aid” into the Black Sea in support of ‘friends’ in Tblisi.

The slight Georgian indiscretion of having invaded Russia was conveniently forgotten. And honestly, if sincerity were in this gesture, Washington would have sent similar war ships to Gaza City during the latest Israeli massacres. But in truth, Washington was promoting the interests of British Petroleum, who hoped for an oil pipeline around Russia. Another example is North Korea. Whether or not Pyongyang acquires nuclear weapons is far more concerning to people living in Seoul, Tokyo and Hong Kong than to anyone in North America. If an honest concern for American interests had actuated Washington in that theater, it’s hard to understand why they handed out A-bombs and billions of dollars in ‘aid’ to the Pakistanis, of all people. Islamabad is practically Al- Qaeda East. The only real interest the United States has in this part of the World is denying safe havens to terrorists, for example in Afghanistan.

But this is truly a double-edged sword, and though it was gracious of Moscow to allow passage of American military supplies, Obama runs a huge risk by escalating that conflict. It could come to define his Presidency in the same way that Iraq defined his predecessor of unhappy memory. It seems more reasonable to address this issue by rethinking its root causes. And if the truth is to be told, the average American has practically no interest in the Israeli-Palestinian conflict at all. There is no oil involved, it’s a mindless, religion-based blood feud and the situation is only likely to worsen, and rapidly at that. There is precious little anyone can really do to prevent the Iranians from acquiring nuclear weapons, and now, after the Gaza City massacres, once they have them, heaven help Tel Aviv. In that event, what will a pointlessly embroiled Washington do? It’s hard to think of a more dangerous situation.

But the good news is that there is every reason to believe that the last eight years were a fluke driven by flaws in the old institutions of American democracy. No one can pretend that there can ever be perfect harmony between the world’s two super powers. There are and probably always will be real differences and disagreements. But in the new century, it is likely that the old alliance between America and Russia will become closer than ever before, driven first by common interests and then by common culture. Succinctly, common interests include the containment of China, a stable Europe, secure and energy consuming, and blocking the global elitists from establishing any new aristocracy.

With Washington freed from distractions, the two sides can begin working together on a missile defense system for Europe, drastic reductions in nuclear weapons and lasting, fair solutions to the global economic crisis. Culturally, Americans will be surprised at how European Russia has become over the last 25 years (this might be surprising to a lot of Russians as well!). Perhaps driven by a new humility, Americans might dare to re-think some of their own old ideas about unregulated capitalism, considering maybe for the first time that socialism isn’t a curse word after all, that profit shouldn’t be the only motive for industry, and that government, of the people, for the people and by the people, isn’t always a bad thing. And maybe Russians can learn from their American friends too, that democracy isn’t endless argument, compromise and tolerance aren’t weaknesses, dissention isn’t treachery and that real and lasting change only comes from the ballot box.