The betrayal of the commons 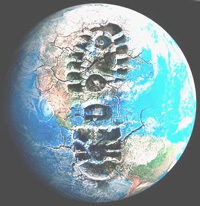 The betrayal of the commons

The cornerstone of capitalism, it has been said, is a handshake. The legal embellishments that constitute the law books lining the shelves of lawyers, those laws are footnotes to the many ways people have betrayed trust, betrayed the letter of the law, the spirit of the contract, the meaning of the handshake.

Trust, not money, makes the world go around. Money is an emblem of the exchange of trust. It doesn't exist except as an invention.

And trust has been broken.

Yes, it's all smoke and mirrors, and everyone who looked already knew that. That isn't news. The news, as Alan Greenspan said pathetically in front of Congress, was that the moguls and bankers and investment gurus did not act according to their own self interest. They did not just risky things but insanely stupid risky things and thought they could hide from their karma. They betrayed the trust of one another when they made deals, invented bogus instruments or used good ones unwisely, and they betrayed the trust of all of us. Nor will they pay the penalty they should. They never do. They never do.

Every structure built to ensure trust of those people and their institutions is now suspect. Every one. We trusted Fannie Mae and Freddie Mac to keep good books and not take risks beyond their ability to manage risk or ours to understand what they were doing.

We trusted agencies like Standard and Poor's to rate corporations accurately so we had a clue when we saw AAA on a bond or note.

We trusted the wise old men of the Fed, sitting on their dais like judges, looking down on plain people, to think about their actions, follow out the implications, and heed voices of caution and alarm.

We trusted the SEC to ensure that a failure to open the books by a man with a charming smile and ties to many Wall Street friends, so easy with his lies and deceit, we trusted that his lack of transparency would raise red flags, we trusted the SEC to do their job and not sell us out because they were complicit, equally criminal in their acts, or just plain dumb.

The astonishing thing about this country, at the present moment, is that our rage took the form of lowering the approval rating of our leaders and voting them out of office in the belief, apparently, that we might rebuild trust. Is that good will, a belief in democracy and its processes that distinguishes Americans for the moment from rioting Greeks in the streets of Athens ? Or are we simply stunned for the moment, trying to understand the enormity of what just happened?

That trusting attitude, that faith in the process to turn the tide, would certainly be commendable. It is good when people are high and dry and even better when we're wet. We are all wet, now, the showering spray of the waves hitting us all, but do we see that the sea is still coming in, higher and higher, not a tsunami but a rising tide going higher than anyone dared believe? Do we hear that glub glub glub as people try to make sane hopeful statements with their mouths already in the water?

Let's return for a moment to those thrilling days of yesteryear when the streets were not so quiet and the view of the Viet Nam war was not, as lately, seen through a telescope wrong way around, little distant people far away and tiny puffs of smoke as they explode.

I remember it well. Toward the end of the seventies and its ravages – the war that tore us apart, the assassinations, the corruption in the government from the president to the FBI to the CIA – some of the people then in power realized the danger of a populace betrayed and enraged by betrayal. The cost of the war was a million lives and grief for the dead was a constant wail, the breakdown of constitutional guarantees was nearly absolute. Looking at the broken glass and burned-out buildings, some came to the conclusion that "the excesses of democracy" as one called the demonstrations and organized resistance to that chaos, that insanity, must not be allowed to repeat.

This is not a conspiracy theory. That's a quote from one of the participants in the Bilderburg Conference at the end of that era. People of power from across the globe discussed with civility what must be done in a context of mutual self-interest. That's not a conspiracy, just because the conversations take place behind closed doors and the press doesn't cover them because the press are invited guests, embedded as it were, and sworn to be silent.

No, not a conspiracy at all. This is the essential nature of oligarchic structures at a new level of trans-global mutuality that converged into the foundation of the global financial networks we inhabit today.

"Trust us," our leaders have recently said even as they threaded the machinery of surveillance and social control through our lives. To an outside observer, it might looks indeed like the apparatus of a police state. But that sounds like "conspiracy" as they use the word to denigrate an opposing position, and I am not talking about conspiracy.

And the fact that they betrayed our trust.

After such knowledge, what forgiveness? Who will be the first to dare to believe the words of a leader or economist now? Who dares to pretend that the trauma that shocks us now is trivial or mild?

Fear and anxiety are thick in the air like cordite after a gunshot. That will not dissolve if we buy something shiny or big, go see a cartoon mouse or stay home and use the drugs that flood our lives, legitimate or not.

That delusion is shredded into tatters and blows away in the wind …this is a moment of clarity, in which like any recovering addict we can see that such a world was insane.

Reality hurts, it is abrasive, but it restores sanity and inner order. The tide is rising and the waves are shooting spray.

The restoration of trust is not what we need. We need to create trust in new structures appropriate for a global society. We need to come to them like weeds coming through the sidewalk from the ground up. We need to make our own word good and act as if the fractured bonds of civil society still exist. We need to bootstrap ourselves and learn again how it feels to have a handshake we can trust.

Trust, but verify, the cold warrior said. And remember LBJ as well: trust is when you've got him by the balls.

To trust those people and their words unless we have their cojones in our tight little fists is like Charlie Brown running to kick the football again.

Let's not. Let us begin by affirming the vision we see when our heads are clear.

It is quiet in the streets right now. There is only the sound of newspapers blowing down dark alleys in the twilight. The excesses of democracy for the moment sleep in their coffins, waiting for the night. Like good patient vampires should.

We are not doomed. The resiliency and strength that makes us human beings are alive in our blood.

But boy oh boy, O masters of society on your high dais, don't push your luck. You lied first to yourselves and then to us. You set up yourselves too to fall down. And the antidote, you say, is to set you up all over again?

Friends, as John McCain said to strangers, friends, the United States government owns banks, insurance companies, manufacturers of farm equipment, more, and will buy more. But conservatives still speak of "socialism" as if it's part of a democratic platform.

The old way of framing things is broken. What anyone might have meant by "capitalism" is not what we have. Not here, not now, and not in the world. We need new skins for new wine. New frames for new ways of seeing. New words for new real things.

Trust, but verify. Use words as if they mean what they mean. If a talk show host or pundit doesn't, shut him off. Using words correctly is equal to a handshake now. We know how to do that. We have done it before. Humankind is built to self-transcend and turn transitions into triumphs. It is not a function of leadership, not alone, but a function of trust among people in the streets who are walking quietly now through canyons of broken glass, trying to get our minds around the extent of our peril, trying to understand what happened exactly while we played the game of life as if it were virtual reality, as if when cut we didn't bleed, as if when shot we didn't scream, as if when the screen went blank it would just reboot.

Richard Thieme (www.thiemeworks.com) is an author and professional speaker focused on the deeper implications of technology, religion, and science for twenty-first century life. He addresses the challenges posed by new technologies, how to reinvent ourselves (as individuals or organizations) to meet these challenges, and practical approaches to creativity, Email [email protected] for details.