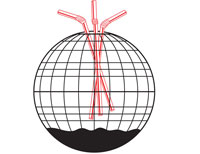 A memorable real-time intersection took place in September when Russia’s equity market started its meltdown. For, that was precisely the moment oil fell through the floor which made export profit margins go negative. Since then, Russia has stumbled around in a panic, a wilderness of its own financial pain.

One gets the sense Russia wants to conceal its enormous dependence on oil and mineral exports, and the how these were vehicles to build up monetary reserves. It’s as if a deeply embarrassing truth has been revealed, and Russia wants to hide its face.

I say, no need mother Russia. No need.

By doing so, Russia could help educate the world on the vital role they play in global oil supply, something the Saudis have refrained from doing. In addition, Russia could follow up this Oil Glasnost in another counter-point to Saudi Arabia by making data on their oil reserves public.

My view is that Russia could gain, not lose strategic power by making their oil reserves data known. Here’s why: by revealing to the world the facts of their reserves, and the cost-floor to extract those reserves, Russia could help to build a price floor for its oil. In addition, rather than weighting their tax structure towards export duties on oil, which creates a synthetic price-floor, Russia could simply advertise some level below which they will not export oil. It’s is my belief that the daily traded price of oil would then have a very difficult time falling below that level.

Russia now shares equal position to Saudi Arabia as the world’s largest producer of oil. By taking a different path from the Saudis, Oil Glasnost would go along way to alleviate Russia’s pain. But to do so would require an almost revolutionary pivot, away from the old paradigm that believes secrecy equals control.