Last week Russia marked the 85th anniversary since the death of Vladimir Lenin, the architect of the Great October Revolution. There are some groups of people in the country that still wage a cold-blooded war against the Soviet Union. The USSR collapsed 18 years ago, but it still exists for those people in many aspects of the present-day Russian reality. They can find vestiges of the Soviet Union in an elevator, in a passport registration office, in a grocery store, etc. 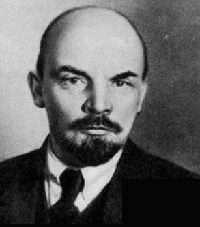 They believe that the Soviet Union is still dangerous for it returns on a regular basis. Such returns are manifested in the arrest of Mikhail Khodorkovsky, national projects, the South Ossetian war and the current relations with the West. To put it in a nutshell, they fight with the Soviet legacy (commonly referred to in Russia as ‘sovok’). If there were no such legacy, the people would be fighting against Russia.

The nation’s history has several landmark dates, which infuriate this audience. Absurd articles about Hitler appear on the eve of Russia’s biggest national holiday, the Victory Day, claiming that Hitler could have saved the country from Stalin’s oppression. Articles about the need to rebury Lenin, “the bloody tyrant and butcher,” emerge on the dates on his birth and death.

The conclusion from such campaigns is paradoxical: Lenin is alive. He is still a big issue for “liberals,” “democrats,” “marketers,” “westerners” and “royalists.” They all consider him a symbol that has to be destroyed.

There is no state without history. The never-ending struggle against the past can only imply the struggle against one’s own nation. Philosopher Alexander Zinoviev said during the 1990s: “They targeted communism, but struck Russia.” People could not understand that during those years, but it is clear now that we had no other Russia.

Anger will pass, but Lenin will always be an outstanding epoch-making figure. Writer and scientist Arthur Clarke used to put Lenin in the same line with such names as Christopher Columbus, Leonardo da Vinci, Albert Einstein, Isaac Newton and George Washington.

This is our country’s history. It can be killed, but there will be no other country given in return.