Is there Hope for Jaap de Hoop Scheffer? 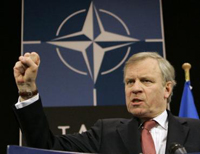 Is there Hope for Jaap de Hoop Scheffer?

Last Sunday (January 18) NATO Secretary General Jaap de Hoop Scheffer published an article in the Washington Post severely criticizing the US-installed government of Afghanistan. Along with a number of half-truths, insults and plain lies, De Hoop Scheffer wrote that the government headed by Hamid Karzai was too corrupt and inefficient to be able to function properly.

Let me quote the entire passage: "the basic problem in Afghanistan is not too much Taliban; it's too little good governance. Afghans need a government that deserves their loyalty and trust; when they have it, the oxygen will be sucked away from the insurgency. The international community must step up its support of the elected government, and, through it, the Afghan people. But we have paid enough, in blood and treasure, to demand that the Afghan government take more concrete and vigorous action to root out corruption and increase efficiency, even where that means difficult political choices."

For analytical purposes, in order to understand the meaning of the message, it may be useful to answer an few questions and establish some facts.

Who is Jaap de Hoop Scheffer?

Jaap de Hoop Scheffer is a Jesuit-educated, ambitious lawyer of rather limited intellectual capacity, but with a keen sense of where to put his loyalties in order to advance his career. A man who switched parties at the right moment and then became Minister of Foreign Affairs of the Netherlands. As such together with the rest of the government, in 2003 he gave official Dutch support to the unprovoked US attack on Iraq and the ensuing colonial war.

Where does Jaap de Hoop Scheffer come from?

Jaap de Hoop Scheffer hails from the Netherlands, the most servile US client state in Western Europe. Since over the past 20 years Dutch administrations have consistently allowed US interests to prevail over the interests of their constituents, the present-day Dutch government has lost touch with the people. There is a lot of bitterness, hatred even, of authorities, as more and more measures are being taken that further limit the already curtailed freedoms of the population. The Netherlands is a thoroughly corrupt state, where the ruling elite has abandoned all forms of moral decency. For example, Joris Demmink, the highest civil servant of the Justice Ministry is a self-confessed paedophile who has so far prevented being taken to court by eliminating or intimidating his opponents. The Queen's own son (brother of the future king) is married to Mabel Wisse Smit, the former lover of the biggest, most violent and most ruthless Dutch mafia boss. After her boyfriend was killed, gangland style, she went on to become the lover of controversial money man George Soros and subsequently of Mohammed Sacirbey, the former Bosnian foreign minister who in 2003 was jailed for embezzlement. In the Netherlands, morals, rules and regulations are for the common man and woman. The ruling elite can publicly and openly flaunt any and all of these.

Why was Jaap de Hoop Scheffer made NATO Secretary General?

Jaap de Hoop Scheffer was made NATO Secretary General because he uniquely fitted the profile. It calls for someone seemingly respectable and prestigious, but easily managed by Washington. However, the most convincing credentials were furnished by the Dutch government, eager as always to secure a nice job for one of its cronies. Ignoring widespread public opposition to the sending of Dutch soldiers to Afghanistan, the Balkenende administration nevertheless promised to commit some 2.000 troops to support the US war effort there, disguising the mission as one of "development aid".The US rewarded this docility by allowing Jaap de Hoop Scheffer to become NATO Secretary General. Of course, even a cursory glance at Jaap's resumé quickly convinced the US government he was an ideal candidate: here was another of those subservient, bootlicking Europeans with a starry-eyed adoration for everything coming out of the United States.

How come NATO is active in Afghanistan?

NATO is active in Afghanistan for a very simple reason: US military ineptitude. Whereas the great European colonial powers, such as Britain, France, Russia, Spain, Portugal, Germany, Italy and the Netherlands did everything on their own, building up their colonial empires without ever having to call in the help of allies, the US is simply not able to do this. For lack of imagination, improvisation, self-confidence, or just sheer ability, the US has not been able to extend its influence beyond the Americas just relying on its own strength. Whether during the Korean War in the 1950s, the VietNam War in the 1960s and 1970s, or the relatively limited colonial wars in Afghanistan and Iraq, the US always had to call in the help of others. In Korea, the help of Britain, France, Australia, Belgium, the Netherlands, and many other nations, including even Colombia (!) helped ward off disaster for the US. In VietNam eventual disaster could not be prevented. After all there were only two nations offering substantial help: Australia and South Korea. That is the reason NATO, the US instrument for the domination of its client states in Europe, was brought in: to prevent a major US loss of face in Afghanistan. Clearly, the US just cannot fight its colonial wars alone.

Why was Jaap de Hoop Scheffer given editorial space in the Washington Post two days prior to the enthronement of the new emperor?

Jaap de Hoop Scheffer was given editorial space in the Washington Post in order to pay tribute on behalf of the NATO members, all client states of the US. After all, whenever a new emperor is enthroned, he is entitled to receive a public act of subservience from his subjects. It is, so to speak, an integral part of is enthronement. It would be incomplete without NATO's chief kissing the robes of the incoming elected emperor.

Now for the meaning of the message. Essentially, what we are seeing here is one lackey calling upon another lackey (and implicitly upon all the other lackeys) to behave himself. The warning Jaap de Hoop Scheffer gave to Afghan president Hamid Karzai is also directed at the government of each and every single NATO country: clean up your act, the new emperor wills it. However, the demand is an impossible one. No client state, no semicolony, no protectorate, no vassal can have a government that is not corrupt. Corruption is the very essence of colonial government, because it serves not the interests of its own people but those of the empire. Like Jaap de Hoop Scheffer himself, Karzai owes his position exclusively to Washington. He was put in place in 2001, propped up by US troops and reinstated by phoney elections held under the supervision of foreign soldiers. By the way, poor Karzai must now be finding out the truth of Talleyrand's bon mot, that "you can do anything with bayonets but sit on them."

Karzai's government is corrupt. Of course it is, but it is no more corrupt than the governments of most NATO countries, save a few that are still managing to retain a bit of national autonomy, such as France.

But besides being corrupt, the Karzai government is criminal for allowing foreign soldiers and mercenaries to kill, maim and destroy at will. Thousands of Afghan civilians have been killed by the US and its mercenary NATO forces, many thousands have been wounded and mutilated and turned into cripples. Tens of thousands have lost their homes, jobs and livelihoods. All in the name of the bogus "War on Terror" unleashed by the US after its "War on Drugs" had proved a quixotic and futile venture.

Jaap de Hoop Scheffer has been an accomplice of the crimes against the Afghan people from the very beginning. In 2001, as leader of the parliamentary section of the Dutch Christian Democratic Party, the US gave him privileged access to the alleged proof that Bin Laden had directed the attacks against the New York WTC Twin Towers. This information was so secret, but supposedly so convincing and revealing, that no one but the leaders of the major parties, and two or three cabinet minsters were allowed to see it. In the Netherlands and in all the other NATO client states. Subsequently, parliaments were supposed to declare war against the Taliban regime, without ever examining the evidence supporting US claims. Jaap de Hoop Scheffer did exactly as he was told, duly instructing his party to vote in favor of military action against Afghanistan.

Jaap de Hoop Scheffer's complicity with US war crimes did not end there. In 2003 as Minister of Foreign Affairs of the Netherlands, he helped suppress information by the Dutch secret service to the effect that Saddam Hussein did not possess any weapons of mass destruction. The Dutch government then faithfully supported the US attack on Iraq and its subsequent colonization. Today, this support of the US in 2003 has become quite a sensitive political issue in the Netherlands. Almost 60% of the Dutch public demands a full-scale parliamentary investigation but since it would likely lead to the fall of the ruling coalition, nothing will come of it.

As NATO Secretary General, Jaap de Hoop Scheffer has presided over the expansion of NATO support for the bungled US adventure in Afghanistan. Jaap de Hoop Scheffers travels around quite a bit to preach the gospel of the need for military action against the Taliban. Yet his task is becoming increasingly difficult. Even the obsequious NATO vassals are finally beginning to understand the total lunacy of their intervention in Afghanistan. It is costing them hundreds of millions of euros, that are sorely needed to relieve the effects of the unwinding economic depression. Nor is the US grateful for the foreign aid it is receiving. US Generals merely complain about the European troops in Afghanistan and are publicly making disparaging remarks about them.

In the light of all of this, the article signed by Jaap de Hoop Scheffer and published in the Washington Post becomes understandable. However, its author must either be perfidiously evil or incredibly stupid.

Sooner than being tried for war crimes, Jaap de Hoop Scheffer will probably get an invitation from his uncle at the White House. For tea, or coffee or something. And as Barry and Jaap are taking sips from their cups and are nibbling at their oreo cookies, they will discuss plans for securing what remains of the US empire.