Eight Years of Bush: It’s Over at Last

George Bush, Forever Deluded: It has been a tragicomedy listening to the words of George Bush as he has prepared to leave office next week. In one interview, he said he would leave office with his head held high. How deluded he is! Anyone have a spare shoe? 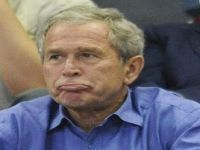 Eight Years of Bush: It’s Over at Last

When giving a farewell address after 8 years of utter horror, George Bush admitted having made many “mistakes.” Saying he made mistakes is putting it mildly. He also said he believes that the world respects his nation “for its compassion.” Compassion? What compassion? How deluded he is!

In listening to this individual speak and watching him the saying comes to mind, “Whom the gods would destroy, they first make mad.”

Bush told the useless White House Press Corps, a collection of pseudo-journalists, that the two mistakes of his invasion of Iraq were: (1) Putting up the "mission accomplished" banner on the aircraft carrier, which, he said, "sent the wrong message," and (2) the absence of the alleged weapons of mass destruction that he used to justify the invasion. Although Bush now admits that there never were any such weapons in Iraq, he still insists that the invasion was the right thing to do.

This is after the deaths of 1.25 million Iraqis, turning 4 million Iraqis into refugees and the destruction of a country’s infrastructure, environment and economy. He was “freeing” them from a brutal dictator, but there is no dictator more brutal than George Bush.

Bush somehow, while being a one man weapon of mass destruction, justifies himself by saying, “America has gone more than seven years without another terrorist attack on our soil.”

Never mind that in so doing he has trashed the US Constitution with more and more laws to keep control of the restive citizenry . He has trashed international law, trashed freedom and democracy and all vestiges of decency and humanity while establishing a modern day Gestapo in that the Department of Homeland Security and related intelligence services have been given carte blanche to spy on not only US citizens, but on individuals all over the world. They have also been given the green light for illegal detentions, deviant sexual practices and tortures that only the SS could envy.

He boasts of having allies on his side, but he has totally alienated allies and the rest of the international community. Now his country’s international relations are merely a matter of arm twisting, threats, blackmail and bribery.

Besides the debacles of Afghanistan and Iraq, he oversaw the expansion of NATO, the murderous aggression against South Ossetia, the illegal declaration of independence in Kosovo and the planned militarization of Eastern Europe by forcing the implementation of a “missile shield” that most know has nothing to do with being a shield and everything to do with encroaching on and threatening Russia.

He speaks of good and evil and fanatics that “pursue campaigns of terror” yet he has been the worst fanatic conducting the worst campaign of terror since his mentor, Adolph Hitler.

Yes, there are things he would have done differently as he said. His regret is that he wasn’t more brutal and more efficient as a mass murderer. He also regrets that his lies were exposed.

In part of his farewell speech, he said, “I have followed my conscience and done what I thought was right. You may not agree with some tough decisions I have made. But I hope you can agree that I was willing to make the tough decisions.”

But the man has NO conscience whatsoever and pretends not to realize the scope of his crimes against humanity. Yes, enriching himself, his cronies, Halliburton, the oil companies and the military industrial complex were really tough decisions!

Another absurd remark he made to further demonstrate his detachment from reality, “Our enemies are patient and determined to strike again. America did nothing to seek or deserve this conflict. But we have been given solemn responsibilities, and we must meet them. We must resist complacency. We must keep our resolve. And we must never let down our guard.”

Oh, yes, people are just waiting in the wings to pounce on the United States of America. America never did anything wrong to anyone. How utterly paranoid and deluded he is!

And then the ultimate topper, “But good and evil are present in this world, and between the two there can be no compromise. Murdering the innocent to advance an ideology is wrong every time, everywhere. Freeing people from oppression and despair is eternally right. This Nation must continue to speak out for justice and truth. We must always be willing to act in their defense and to advance the cause of peace.”

Talk about Orwellian doublespeak! He has been the epitome of an evil presence in this world. He has murdered to advance an ideology, an ideology of corporate greed. The only thing he freed anyone from is their lives, their property and their resources and caused untold oppression and despair.

He has systematically murdered the truth, as well as millions of human beings.

Thanks to George Bush, there is record unemployment and the world’s economy entered into an unprecedented crisis situation that has yet to be resolved. As president, George Bush never even remotely tried to be fair or honest. He did nothing but dictate, “My way or the highway” and he was listening to absolutely no one. He boldly proclaimed himself “the decider. “

Obviously George Bush has been suffering from some sick, twisted, demented urge to prove to his mother he was a better man than his father. Psychologists can truly have fun examining the many mental malfunctions afflicting George Bush. But that is no excuse.

As he turns the reins of power over to another, the world can only hope his many crimes will not go unpunished. His legacy in history shall see him named among the scourges of humanity such as Nero, Napoleon and Hitler. Not all mass murderers are created equal, but if the law of reaping what you sow comes into play, George Bush is in deep trouble.