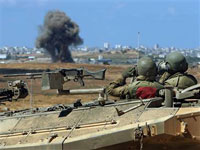 The massive assault by Israel on Gaza in the last two weeks (of late December in 2008 and early January in 2009), with the death of many Palestinian civilians (many of whom are women and children), the destruction of homes and infrastructure everywhere, the disproportionate terrorization of the residents (especially among the young), and a catastrophic humanitarian crisis awaiting those who have nowhere to escape from the heavily bombed city, can teach us something heartbreaking about human relations.

This is true, even when both sides have handy excuses. Israel, on the one hand, has the handy excuse of “self-defense” to respond to some highly inaccurate, crude explosives fired by the Hamas (which, however, did not succeed in killing anyone nor inflicting any major damage). The Hamas, on the other hand, likewise uses the excuse of the Israeli blockade of Gaza which has made their lives inhumanely miserable for quite some time - without mentioning yet the Jewish “occupation” of Palestine and the subsequent “dispossession” of the Palestinians.

Of course, in politics, an excuse is often a pretext for something else, and each side has its own rationalization to justify what it has done to the other. Yet, as is often seen in human history, atrocities can be committed, all in the name of the “good” against the “evil.”

“We” are the “good,” so to speak, and “they” are the “evil.” Therefore, because “they” are “evil,” it is entirely justified to use force, “by any means necessary,” to eliminate them. After all, as they are “evil,” there should be no “mercy” towards them. Thus is the dehumanizing temptation. In this way, the “hell” of human evil is unleashed, and both sides suffer in a vicious circle of violence, with no end in sight.

But there is a major difference in this case. On one side is the overwhelmingly dominant military force, with its formidable arsenals to inflict excessive suffering on its enemy. On the other side, however, is a disproportionately weak fighting force, with little to fight back except some crude weapons which seldom do any major damage on its foe. This is called an asymmetric warfare.

Lest any hasty misunderstanding occurs, the comparison between the Holocaust and the inhumane treatment of the Palestinians here is not about the broad scale of inhumanity (or its extensiveness), but about the power temptation to commit “evil.” And Philip Zimbardo once defined the commitment of “evil” in a three-fold way, namely, (a) to hurt others physically, (b) to damage others psychologically, and (c) to destroy others ideationally, especially to an excessively intensive (horrific) extent.

For instance, the Jews can blame the Nazis for their suffering in the Holocaust, but the Nazis can likewise blame the Jews for their “business exploitation” of the Germans over time and the resented religious “exclusiveness” in the Jewish dealing with others. By the same logic, the Jews can blame Arab “anti-Semitism” for the violent conflict with them, but the Palestinians can likewise blame the Jews for their “occupation” of Palestine and their subsequent maltreatment of the Palestinians for decades, with the massive assault on Gaza only as a latest chapter of Jewish “oppression.”

Surely, it is futile to adjudicate which “blame” is valid (or not) in the two tragedies of human relations, as each side is ready to add more oil to the fire of mutual accusations. Yet, these tragedies can teach us two lessons valuable for understanding the nature of human relations.

And the second lesson is this: The stronger the weak becomes over time, the more likely the weak ends up behaving in the same way that the strong did to them before. In the process, the now strong (who was then weak) will go through the same cycle of emotional condemnation in the others against them.

This then means that, if Israel is triumphant in its massive assault on Gaza, the price to pay is the recurrence of anti-Semitism against them. This is all the more serious for little kids in Gaza, with their traumatic experience of the excessive (horrific) assault by the Israelis, as this only sow the seeds of their anti-Semitism in the future, when these kids become adults. In addition, anti-Semitism will no doubt spread even more around the world, especially by those who show solidarity with the Palestinians in regard to their excessive suffering inflicted by Israel.

This is the Jewish contribution to anti-Semitism. Is there “fairness” in human history, in the end? It all depends on “who” speaks about “fairness.” What is “good” for the goose is “bad” for the gander, and vice versa, so the saying goes. And do humans learn anything from history? Surely, they learn from old mistakes but continue to make new ones, often about the same thing but in a new way.

In any event, the point here is about these two lessons in human relations —- and their long-term consequences.

Thus speak the dead from the graves in the Holocaust and in Gaza. But, thus stand the defiant from the power of violent force in the Third Reich and in militarist Israel. And in the end, thus stares human tragedy towards all of us.

About the author: Dr. Peter Baofu is the author of 20 books (as of 2008) in numerous fields. He can be contacted by email.