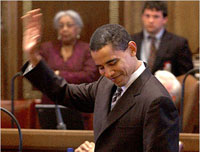 Obama may have been elected president, but the man remains a mystery. There are still so many unanswered questions:

“Who is the real Obama?”

“Is there a real Obama?”

“Is he at all an American citizen?”

“How will he save America?”

“Can he save America?”

There is no end to speculations about the man's true character and the kind of policies he is likely to pursue.

It is, to say the least, absolutely insane that someone about whom so little is known can be elected president of the US, still the most powerful country in the world, at least in a military sense. Therefore, it is a sad but eloquent comment on the state of US democracy. This year, the choice US voters could make was a difficult one: should they vote for a tough-talking old turncoat and self-styled war hero with one foot in the grave, with a running mate best described as a religious zealot, a bimbo from beyond the frigid fringe of civilization? Or give their vote to a smooth-talking, shifty-eyed gentleman of colour, assisted by some old geezer from the senate? Some choice for a nation pretending to be the epitome of modern democracy!

If the voting process has been regular and lawful and if there has been no manipulation of the results—which would be truly surprising after what happened in the 2000 and 2004 presidential elections—it is perhaps understandable that Obama may have won the 2008 elections.

Like the Hawaiian he is, Obama has been surfing on a wave crest of hidden racism.

By not emphatically distancing himself from his blackness, he has of course secured the black vote, but above all encouraged US blacks to see him as a symbol for their own long overdue emancipation. Needless to say, they will be bitterly disappointed, if only because their hopes have been pitched so high. Even more than the blacks themselves, the way non-blacks tend to look at Obama is racist, but in a twisted sort of way. Many are afraid of openly criticizing Obama, for fear of being branded a racist, as if Obama's blackness would make him an intrinsically good person, someone beyond reproach, with impeccable ethical standards. This inverted racism, so typical of liberals, is even more pernicious than straightforward racism, if only because it is so difficult to pinpoint. Why should a black be a better president than a non-black? Aren't blacks human, too?

There was, however never a real choice for the US voter. In the past, there may have been minor differences between the two US political parties that are allowed to take part in the presidential elections, the Democrats and the Republicans. As far as I know, Obama is the first president-elect whose nominations for key cabinet posts suggest a seamless continuation of his predecessor's policies, allegedly representing a rival political party. Any real difference between the two parties has now practically disappeared. Apparently, there is no longer even a serious effort to disguise this disturbing reality, which makes it clear at last that the US is in fact a one-party state.

Whatever one may say about Obama, he clearly is a postmodern politician. What does that mean? Just as postmodern architecture is basically a kind of streamlined eclecticism, while adding nothing special, Obama is an eclectic politician. He does not possess a true personality and may adopt whatever policy, either because he feels like it himself, but more likely because his handlers tell him what to do.

Obama should be seen as a black Ronald Reagan: a guy most people like superficially, but who lacks any character. Come to think of it, Reagan was the first of this particular kind of politician and by now, this type has come to dominate the political stage in most of the “Western World.” Sarkozy is one, so are Berlusconi and Bush II and Arnold Schwarzenegger. Blair was one, Carlos Saúl Menem of Argentina was, and so was Alberto Fujimori of Perú. They come in all sizes, shapes and colours but they are all alike. Great communicators all of them, they are pampered and protected by the media and seemingly quite popular. However, they are all men without qualities, like the main character of Robert Musil's prophetic novel about decadent early 20th-century Vienna.

This race of spineless, adaptable politicians sits on top of a pyramid that is composed of individuals like them, also lacking in character. In other words, they are not real persons, just some kind of robots, like the Stepford Wives. You just push the right button and they'll do what you tell them to.

The problem is that the postmodern politician almost exclusively depends on his advisers. However, since these have no personality either and want to please their master, really tough decisions are never made. What is called a tough decision these days is usually a controversial decision to siphon off public funds for the benefit of some pork-barrel project. Such as the “tough decision” to unleash the bogus war on terror, which has mainly benefited a rather limited group of private corporations and investment funds: Carlyle, KBR, Bechtel Corp., the remaining handful of military contractors (Lockheed, Boeing, etc.) and the various “security” firms hiring out mercenaries. In other words, what is called a tough decision in postmodern politics, boils down to the plunder of public funds, since at the same time social and health care spending is being drastically cut. This shameless plunder was initiated by the Reagan administration in the 1980s, epitomized by its slashing of federal funding for school lunches. This was partly achieved by declaring tomato ketchup a “vegetable” and eliminating more expensive real vegetables from the menu.

Postmodern politicians—and Obama will definitely not be an exception—are heading elaborate kleptocracies under the guise of democracy. Since they have no character, they have no conscience either and hence have no qualms about telling lies all the time. As a matter of fact, they get so accustomed to confusing truth and fiction, that they end up living in a fake world, surrounded by fake people like themselves.

Politicians like Obama are not real people, nor are they normal in any sense. Their view on the world is so twisted, so upside-down, that they would be considered psychopaths when living under normal circumstances, surrounded by real people. We all know psychopaths are dangerous and should be avoided whenever possible. Unfortunately, we cannot escape from people like Obama for the simple reason that they have been elected (or appointed, but who can tell?) to be our leaders.

What can Obama do? What will be his options?

Upon assuming office, Obama will find himself at the head of a bankrupt country. Bankrupt in many senses: financially, socially, ethically, psychologically. The US has become the victim of its own destructive policies. It is now finally being confronted with the consequences of decades of stupidity and ineptitude: financial swindling, the dismantling of the welfare state, the official endorsement of medieval interrogation practices (torture) and the terrible loss of face for being unable to win a couple of minor colonial wars in Somalia, Afghanistan and Iraq.

Obama will simply not have the money nor the resources to tackle the problems the US is facing. Only the very best and brightest, most courageous individuals will be able to begin saving the US. However, there aren't any indications Obama has the wherewithal, nor do those he has been appointing so far seem to have any of the required superior qualities.

Obama will not have many options. As a matter of fact, it is to be feared he only has one: a flight forward into even more violence. It is now certain that the Obama adinistration will shift its focus from the mess the US has made in Iraq to the unwinnable war in Afghanistan. In other words, under Obama, the US will continue careening from one SNAFU to another, leaving behind a trail of dead bodies, destruction, misery—and deadly radioactive radiation from the depleted uranium shells fired by US troops.

If anything, the US debt will run even higher, but it is never going to be paid off. Yet the bill will have to be paid someday. By whom? Why, by the old and new poor in the US and by foreigners, no doubt about it.

Now that Obama has been elected president, all one can say is, to paraphrase Winston Churchill: there will be blood, toil, sweat and tears. The US will be further impoverished, but probably, Obama and his cronies will end up being quite a lot richer than they are today.

13:46
Russia tells UN for how long special operation in Ukraine will last
20:00
USA bans Russian gold
19:56
USA sanctions Russian defence officials and TV presenter
18:00
Poland: 'Enemy' is too beautiful a word, but we should not call Russia so
17:03
Macron refuses to declare Russia a sponsor of terrorism at the Zelensky's request
15:25
Ukraine uses HIMARS systems for the first time
14:38
Russia expands the "black list" of Americans
14:23
Wirtualna Polska: Warsaw to shift responsibility to Gazprom for stopping gas supplies
13:44
CNN: The US doubts Ukraine's ability to return lost territories
13:34
Kremlin: Kyiv's able to end the conflict "before the end of the day"
Americas
USA unveils plan for post-Putin Russia to collapse into smaller states

Hotspots and Incidents
Ukraine uses HIMARS systems for the first time
13:46
Russia tells UN for how long special operation in Ukraine will last
20:00
USA bans Russian gold
19:56
USA sanctions Russian defence officials and TV presenter
18:56
Expert names the two reasons why Zelensky wants to end the conflict before winter
18:46
USA unveils plan for post-Putin Russia to collapse into smaller states
18:11
Russia published images of the decision-making centres in the US and Europe
18:00
Poland: 'Enemy' is too beautiful a word, but we should not call Russia so
17:03
Macron refuses to declare Russia a sponsor of terrorism at the Zelensky's request
15:30
Israeli expert reveals when the Ukrainian military in Donbass will be defeated
15:25
Ukraine uses HIMARS systems for the first time
РусскийDeutschFrançaisPortuguese