Christian missionaries make no secret of the fact that they use medical services, education, and employment opportunities to lure impoverished indigenous populations throughout the world into conversion to Christianity. 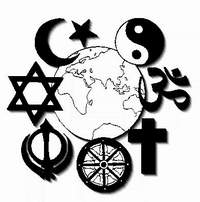 Using your wealth to purchase other people's loyalty is a game as old as humanity itself. Rich men use their wealth to attract women, unscrupulous employers use material incentives and disincentives to manipulate their workers, and wealthy countries like the USA use their national wealth to keep their citizens loyal to the cause of aggressive and genocidal Imperialism. But historical longevity and common practice don't make the manipulation or exploitation morally or ethically right.

Organized religions are inherently POLITICAL organizations. There is a fundamental difference between the financial enterprise and political machinations of an organized religion versus a mass of independent, unaffiliated believers, philosophers, and mystics who do not support any organized religion.

Christianity and Islam are known as proselytizing religions because they make an organized and systematic effort to gain converts, and they often provide services, products, or employment to attract converts. Judaism, Hinduism, and Buddhism show far less zeal about gaining converts, which is why you almost never hear about Jewish, Hindu, or Buddhist missionaries.

Modern medical and nursing schools usually teach their students the moral principle that the provision of medical services should never be used as a means to proselytize or promote a religion, but that does not deter many Christian health care providers from doing exactly that. Most of the medical and charitable organizations based in Christian countries are fronts for Christian proselytizing activities.

During the CIA's illegal Iran/Contra scam of the 1980s, Christian missionary pilots and planes smuggled drugs into the USA and arms into Central America and Iran. Now the CIA is using Christian missionary planes to smuggle heroin from Afghanistan, cocaine from Latin America, and for 'rendition' flights of 'Terrorist' prisoners to secret prisons that practice torture and commit extra-judicial executions.

The USA's Faith Based Initiative law provides Christian missionary organizations with taxpayer funds that are used to proselytize Christianity to indigenous populations throughout the world. Christian missionaries are the leadingedge of a religious, cultural, economic, and political aggression supported by the US government.

When missionaries bring outside wealth to an impoverished Third World country and use that wealth to provide services that are meant to attract converts, they are interfering with the local social and economic structure as well as the local cultural traditions. Indigenous people who take advantage of the privileges provided by the missionaries and convert to Christianity partake in a social organization that uses foreign wealth as a tool to eliminate the indigenous culture and replace it with Christianity.

Many Islamic countries strive to protect the cultural identity of their citizens by enforcing a ban on preaching any religion but Islam. Considering the aggressive, insidious, and highly political nature of Christian missionary programs, the banning of non-Moslem religious preaching by Moslem governments makes sense.

Currently there is no officially Hindu State anywhere in the world, but perhaps India should become a Hindu State in order to protect its indigenous religion and culture from the predatory missionaries and State-sponsored cultural Imperialism that are coming from both Christian and Moslem countries. If the Jews have the right to establish and maintain Israel as a Jewish State, then the Hindus certainly have a right to establish and maintain India as a Hindu State.

When Western leaders talk about a 'Clash of Civilizations', what they really mean is Judeo-Christianity and corporate Capitalism versus all non-Christians and non-Capitalists. Christian missionaries are essentially colonialists working for Christian cultural Imperialism.

When the Hindus of India rise up in riot and drive out the Christian missionaries and the Christian 'cash converts', they are doing what the Iraqi, Afghani, and Palestinian Freedom Fighters are doing. They are protecting themselves and their indigenous culture from wealthy and unscrupulous invaders who have no respect for them or for their culture. I wish the Hindu nationalists well in their efforts to defend and maintain the independence and survival of their indigenous culture and religion against the onslaught of predatory and disrespectful foreigners whose goal is to replace indigenous traditional cultures with a global Christian empire.

If Christian missionaries want to come to India and try to make converts to Christianity, let them come with empty pockets and compete on a level playing field. And if most of the locals don't want the missionaries interfering with their traditional way of life, they have the right to make the missionaries and their converts leave.