Pravda.Ru has interviewed Mr. Adnan Oktar, a prominent Muslim scholar, also known with the pseudonym Mr. Harun Yahya. Mr. Oktar is the author of over 250 books which are read by millions of people. 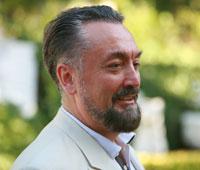 Pravda.Ru: What should Turkey’s policy toward Russia be? How can relations be developed? How can the Turkish Islamic Union that you are planning benefit Russia?

Mr. Oktar: Turkey is active on America’s behalf and on Russia’s behalf in the region. It is also active in favor of China. And everyone is happy. America is pleased with Turkey, and Europe, and Russia, and China. That will continue when Turkey unites with Azerbaijan, when the Turkish-Islamic Union is established, and there will be nothing new. The Turkish-Islamic Union is one from which Russia will benefit. It means a wealthier Russia. It means new factories and plants in Russia. It means Azeri petrol, Turkish petrol and Turkish minerals being easily sold in Russia and a further increase in all their possibilities. Its markets will expand, trade will expand. In military terms threats will decline because Turkey has no hostile attitude to Russia, but rather a friendly one. We regard Russia as a friendly country, a noble country. Therefore, Russia will be very pleased with such a unification, which will be very much in its interests. There must never be a policy of exclusion. The Turkish-Islamic Union will always follow a unifying, amicable course. Exclusion leads to strains and unease. A logic that constantly unites, that says, “Let us be brothers,” is most important. Polarization, separate camps, is not pleasant. We must say, “You Russians must develop as you please in economic, scientific and political terms, and we can also develop in economic, scientific and political terms, and we can enjoy all kinds of good things.” What should not be said is, “We don’t care whether you are poor, so long as we are rich.” What we must say is, “We want to be rich, and want you to be rich, too.” For example, if Russia is poor when the Turkish-Islamic Union is set up, is that a real Turkish-Islamic Union? Is that a union of peace? Can it bring us happiness? We will obviously be uneasy, because we want them to be wealthy, too. A happy Russia will make us happy.

Pravda.Ru: What is your opinion of the Georgia-Russia war?

Mr. Oktar: It is obviously a Masonic ruse. Bloodshed and setting brother against brother is something Masons have always resorted to. However all disputes can be resolved by peaceful means. It is of course most upsetting to see, thousands of people have lost their lives, elderly people have been thrown onto the streets and left homeless. These are things that should never have happened. Russia is a major, modern state, of course. One must respect the Russian state. I do not believe that Russia has an imperialist, occupying policy. But one must also respect communities’ wishes. Everyone must adopt a peaceful, well-intentioned and respectful attitude towards everyone else. Georgia says, “We want to leave this community,” and the question is put to the people. They can leave if they so choose. I do not think that Russia will then intervene with force. But if the Ossetians and Abkhazians say, “We want to act with Russia,” they must be able to do so. But the aim here is not to leave Russia alone or push it towards isolation. The logic of “do what you want” is unacceptable. In other words, in separating from Russia, that must happen in the light of a plan that also takes into account Russia’s well-being, wealth and prosperity. The logic of “Everyone must abandon Russia, withdraw their support and leave Russia isolated, and in the end it will be ruined” comes to mind, but this is unacceptable. Let anyone who wants to leave do so, of course. But this means doing so while still regarding Russia as a friend and striving to improve their position, as well. People have now begun talking of the idea of the Caucasian Union as the initial stage of the Turkish-Islamic Union. This is most excellent. But no state in Asia must be excluded. It must be predicated on their all being strong, and it is most important that all states be respected. Anything else would be a disgrace. I think that all problems can be solved on the basis of love and affection, by maintaining one’s rationality, and protecting and looking out for one another.

Pravda.Ru: What do you think about Iran’s policy in the region?

Mr. Oktar: Iran is a powerful and important state. The important thing is to adopt a unifying policy in the region, in which case there will be no problem. And as far as I can see Iran does want to play a unifying role. President Ahmadinejad showed this on his recent visit to Istanbul. He issued messages of brotherhood. He issued statements indicating the importance of the Turkish-Islamic Union, and more importantly he performed the Friday prayer behind a Sunni imam. That was a most significant message. This action by Mahmoud Ahmadinejad reveals the Islamic brotherhood, the Islamic bond between Sunnis and Shiites, and that a Sunni can pray behind a Shiite or a Shiite behind a Sunni. It is therefore apparent that Ahmadinejad looks extremely favorably on Islamic brotherhood and an Islamic Union under Turkish leadership.

Mr. Oktar: I think that Putin is sincere. He is a noble individual, as is the Russian nation. As a nation, the Russian nation are pleasant and virtuous people. I know several Russians and they are really very moral, immaculate people. They are spotless and excellent in moral and personal terms. They are very delightful people, and Russian children are really lovable. Why should they be unhappy or uncomfortable? What happiness could that bring us? We have lived as brothers alongside the Russians for hundreds of years. So why should they be divided from us now? You are our brothers. Let us enjoy close relations. Let our commercial, artistic and cultural activities be inter-related. We need one another. Let us found universities together. Let art and science progress. The days of iron curtains and brick walls are over. Let them be torn down. They are grave mistakes. Russia has a considerable technological strength, and is strong in terms of scientists and scientific means. Russia is not a country to be isolated or excluded. That is why I regard a policy of polarization as wrong. Russia behaved well and warmly towards Muslims for a very long time. The freedoms that Russia gave to Muslims are still plain to see. Its policies supporting Islam and the Qur’an are plain to see, and I have seen this for myself. It would be wrong to isolate such a state, as if throwing it out to die. There must be a policy inclusive and protective of Russia in all regards. In that case everything will be fine.