The perils of visceral voting 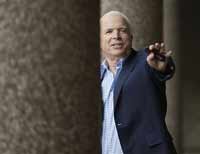 The perils of visceral voting

“Think about it John! Voters have elected movie and television stars to governorships, to Congress, and even to the presidency. Oftentimes, if those stars die while in office, voters elect their spouses, as if osmosis gives the wives and husbands of deceased elected officials some bizarre form of political acumen. Even people who helped others steal elections have won elections themselves!”

“As the ‘good-old-boys’ in West Virginia have shown, you’re already guaranteed a number of votes simply because your opponent is African-American. And a bigot’s vote counts as much as the vote of a person with honor. What you need to do now is market yourself to those voters who are disgruntled over the defeat of Hillary Clinton. You can do that by picking a woman as your running mate. She can be as diametrically opposed to Hillary Clinton’s political views as George W. Bush is to sanity, and it won’t matter.”

While the author of this article cannot truly claim that the above discourse took place, when I first heard that John McCain had selected Alaska governor Sarah Palin as his running mate, I did immediately ask myself, “Is he really so cynical, or so naïve, that he doesn’t think voters will see through his transparent attempt to exploit the gender card?”

A few days later, I discovered that my thoughts were being echoed by Pulitzer Prize winning commentator Leonard Pitts, of the Miami Herald. In his column, Pitts also noted the “irony” of McCain choosing Palin, since the political party McCain represents “has spent years inveighing against so-called ‘identity politics.’”

In fact, during his campaigns, George W. Bush incessantly pandered to the twin evils of racism and sexism by denouncing affirmative action policies—designed to remedy discrimination against minorities and women—as “preferential treatment.”

Obviously far too many voters were oblivious to the fact that Bush, through his family’s wealth and influence, benefited from “preferential treatment” his entire life. As I’ve often stated in previous Pravda.Ru articles, Bush is not adverse to “preferential treatment,” as long as he, and his wealthy white supporters, are the preferred.

A few days after McCain’s announcement, polls appeared to indicate that his strategy was working. Suddenly a plethora of “undecided” voters, white women in particular, threw their support behind the McCain/Palin ticket.

A prominent feminist even claimed that women have endured worse discrimination than African-Americans, because African-American men were granted the right to vote decades before women were.

While this is chronologically correct, it is nonetheless a specious argument. It is true that African-American men were constitutionally given the right to vote in 1870, whereas women were not allowed to vote until 1920.

In reality, however, the voting rights of all African-Americans, male and female, especially in the postbellum South, were nullified in 1877 after Rutherford B. Hayes, to win a disputed presidential election, agreed to remove Northern troops from the former Confederate States, dooming African-Americans who resided there to a system of segregation and disfranchisement that cartoonist Thomas Nast described as “worse than slavery.”

This disfranchisement lasted for almost a century, and evidence of its power, and the racism it engendered, can still be seen by looking at the history and current makeup of the United States Senate. Nineteen women have served in the Senate, and sixteen are serving today. By contrast, only three African-Americans have ever been elected to the Senate, and only one, Barack Obama, is currently serving.

This was evident in the 2006 gubernatorial race in Ohio, where African-Americans resoundingly rejected John Kenneth Blackwell. Blackwell, an African-American and supporter of George W. Bush during the 2004 election, was suspected, in his capacity as Secretary of State, of wrongfully disfranchising minority voters so he could deliver Ohio’s electoral votes (and, as it turned out, the election) to Bush.

Of course, many voters are claiming it is not Palin’s gender that persuaded them to support the McCain/Palin ticket, but her other attributes: It was her speech at the Republican Convention; it’s her “family values;” it’s her “faith.” One woman even said that, as a woman, Palin could more readily identify with the pain of losing a child in combat in Iraq, while an idiot on the Faux “News” Channel tried to argue, with a straight face, that Palin has “international political experience” because of Alaska’s proximity to Russia, which apparently means everyone residing in Washington D.C. has presidential experience since they live near the White House.

But television shows and movies have shown that any moderately skilled person can effectively deliver a scripted speech. Actors on medical dramas like House and ER routinely rattle off medical terminology with unwavering proficiency. But this doesn’t make them doctors, nor does Palin’s well-rehearsed speech make her qualified to potentially run a country that is arguably the most powerful on earth.

Palin’s “family values” are also questionable. Although there were vociferous right-wing condemnations of the media for revealing the pregnancy of Palin’s seventeen-year-old daughter Britney, many reporters correctly pointed out that Palin’s self-serving political ambitions were primarily responsible for catapulting her daughter’s situation into the international spotlight.

Recently The Daily Show’s Jon Stewart exposed the hypocrisy of Palin apologists who contend that Britney’s pregnancy is a “private” matter. One of these apologists is Faux “News” Channel’s sexually harassing blowhard, Bill O’Reilly. Now suddenly concerned about preserving the Palin family’s “privacy,” O’Reilly did not hesitate, a few months earlier, to label the parents of Jamie Lynn Spears “pinheads” after it was revealed that the sixteen-year-old actress and singer was pregnant.

Voters who are now failing to make any distinction between Hillary Clinton and Sarah Palin should ask themselves: What would these right-wing Palin apologists have said if an unmarried Chelsea Clinton had become pregnant during the latter years of Bill Clinton’s presidency?

It’s a sure bet that all the current “respect” for privacy would be nonexistent. In its stead would be twenty-four-hour images of Monica Lewinsky and Paula Jones flashing across television screens, while the hypocritical “family values” crowd pontificated about how “immorality breeds immorality.”

As far as Palin’s alleged “faith” is concerned, and the speeches she’s delivered concerning it, I suppose if God is some vengeful warrior, and the wars in Iraq and Afghanistan are God’s “holy” crusade, then one could dub her a “believer.” Yet it should be remembered that those opposing the United States in Iraq and Afghanistan attribute the very same characteristics to God that Palin does.

Given how easily many voters were swayed by Palin, I began to wonder what motivates them in the first place. Factoring in the gender and racial overtones of the upcoming election, my hypothesis is that most voters choose candidates who appeal to their basest instincts, then look for ways to rationalize their choices.

For example, I recall an instance where a woman announced she wouldn’t vote for Obama because “She didn’t like what he stood for.” But when asked what he stood for, she couldn’t give an answer.

Because her honest answer would have been, “I’m not voting for Obama because he’s black.”

An inherent problem with visceral voting is it degenerates the democratic process into something ludicrously hypocritical. The mantra of the day becomes, “Even though it is wrong for my opponent, it is not wrong for me.”

This is why the allegations that “sexism” is the impetus behind the criticism of Sarah Palin ring hollow. After all, many of the people making these claims have relentlessly attacked Hillary Clinton over the years, and then justified their attacks by asserting that a woman in politics should not expect special treatment just because she’s a woman.

Another problem with visceral voting is it creates and elevates “people without principles,” who do and say anything to attain political office. This, in turn, eliminates any possibility of an honest and visionary leader ever getting elected.

In 1968, for example, Dr. Martin Luther King Jr. was being encouraged to run for president on a third-party ticket. But he never would have won. In addition to the aversion most voters have to candidates outside the two-party system, King’s devotion to non-violence, his advocacy for the poor and his tendency to speak the truth would have doomed him.

Contrast this with John McCain, who voted against the creation of the Martin Luther King Jr. Federal Holiday in 1983. Not surprisingly, Arizona, the state McCain then represented (and currently represents), was also one of the last to recognize the King holiday, and even then, many critics contend, this recognition was more intended to encourage the National Football League (NFL) to play its preeminent game, the Super Bowl, in Arizona than to honor Dr. King.

Now that McCain has presidential ambitions, he has predictably conceded that his vote against the King Holiday was a “mistake.” But if there were no King Holiday in America would he still consider his vote to be a “mistake?”

Regardless of who wins the presidential election of 2008, the loser is evident. It is America, a nation still deeply divided along the lines of race and gender, a nation where the color of one’s skin or the shape of one’s genitalia is apparently more relevant to voters than qualities like honesty, integrity, altruism or the hope for a better world.