Radovan Karadzic: One Way Ticket to The Hague

Recently, former 1st President of Republika Srpska, and one of the world most wanted fugitives was arrested in Belgrade by the Serbian authorities after alleged tip-off from a foreign intelligence service. Radovan Karadzic was a fugitive since 1995 after having been indicted for war crimes by the International Criminal Tribunal for the former Yugoslavia (ICTY). A $5 million reward had been offered for his arrest by the United States Government. Since his arrest many reactions and questions has been raised around the world. 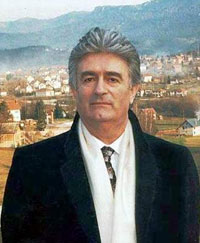 Radovan Karadzic: One Way Ticket to The Hague

Radovan Karadzic was born in 1945 in Petnjica, Republic of Montenegro. In 1989 he co-founded political party called the "Serbian Democratic Party" (Srpska Demokratska Stranka – SDS) in Bosnia and Herzegovina, whose objective at the time was to convince the republic's Bosnian Serb community and Croatian Serbs to remain a part of Yugoslavia. In March 1992, in a referendum, Bosnia gained independence from Socialist Federal Republic of Yugoslavia (SFRY) and later in April was recognized by the United Nation as an independent state. Later that year Karadzic became the first President of Republika Srpska until 1996.

In 1995, Karadzic was indicted by the International Criminal Court along side with Colonel-General Ratko Mladic (currently at large). He is accused of personal and command responsibility for numerous war crimes committed against non-Serbs, in his roles as Supreme Commander of the Bosnian Serb Armed Forces and President of the National Security Council of the Republika Srpska. Among others, he is accused of ordering the Srebrenica massacre in 1995, Siege of Sarajevo, ordering that United Nations personnel be taken hostage in May-June 1995.

- Unlawful transfer of civilians because of religious or national identity

- One count of severe breaches of the Geneva Conventions

- Three counts of violations of the Laws of War

- Five counts of crimes against humanity

Karadzic is not the only high ranking individual accused in front of the ICTY. The accused are ranging from common soldiers to generals, from Presidents to Prime Ministers, such as:

- Slobodan Milosevic, President of Serbia and Yugoslavia; the first sitting head of state indicted for war crimes (died in cell)

- Ratko Mladic, Commander of the Bosnian Serb Army (at large)

- Ramush Haradinaj, former Prime Minister of Kosovo (Acquitted in May 2008)

If extradited to the International Criminal Court, Radovan Karadzic would become the 44th Serb suspect to be sent to The Hague.

According to Serbian government officials, Karadzic was arrested on 21 July 2008, in Belgrade, however, special police forces were visible in Belgrade centre on 18 July evening, when is to believed Karadzic was arrested. These claims were refuted by Serbian government. Until his capture, Karadzic lived under the false name of Dr. Dragan Dabic. He also obtained and used a false ID and practiced alternative medicine at a private medical clinic, specializing in alternative medicine and psychology. He is currently detained in a special detention unit of Serbia's War Crimes Court and waiting to be transferred in to International Criminal Court in The Hague.

Karadzic's capture occurred just a few days before International Criminal Court's chief prosecutor, Serge Brammertz was due to visit Serbia, just a few weeks after the formation of the new Serbian Government, and few months after the government signed the Stabilization and Association Agreement (SAA) treaty with the European Union. This arrest also came just after Milosevic's top party member and now president of the Socialist Party of Serbia (SPS) was appointed Minister of Internal Affairs.

The strangest thing is that the new government was formed between pro-European/democratic parties led by the Democratic Party (Demokratska Stranka - DS) which was a party of former (assassinated) Prime Minister of Serbia Dr. Zoran Djindjic, now succeeded by the current President of Serbia Boris Tadic, and the Socialist Party of Serbia (Socijalisticka Partija Srbije - SPS) which was the party of former President of Serbia and Yugoslavia Slobodan Milosevic, now succeeded by Ivica Dacic.

As a reminder; democratic/pro-European parties came to power in so-called October 5th Revolution in 2000, when they striped Milosevic and his regime out of power and replace him with new President of Yugoslavia Dr. Vojislav Kostunica and established first democratic government. Now after eight years of scandals and prosecutions of Slobodan Milosevic, his party and close associates, Democratic Party formed the coalition government with Socialist Party of Serbia.

Because of the latest development, some question that should be asked are:

1. Did Vojislav Kostunica knew the location of Karadzic, and was he protecting him all this time, since he is no longer in power, arrest came to place?

2. Did the Democratic Party decided that this is now time to give Karadzic up since they formed a new coalition government with the Socialist Party of Serbia, or was it an attempt to divert attention and prove that they are a pro-European Government, no matter who is in coalition with them?

3. Did the Socialist Party of Serbia, knew of the whereabouts of Karadzic, and used that information to arrest him in order to bring their party closer to the West, and maybe get some support from them in the next elections?

4. Did some other Governments, organizations, institutions protected and financed Karadzic all this time, and decided that is time to give him up?

5. Did somebody tuck in the $5 million reward?

No matter if we get the answers to these questions or not, the international community will never allow for Karadzic to walk free again. After all this years, this arrest in a one way ticket for Karadzic to the UN Tribunal.