Why we need not fear Iran 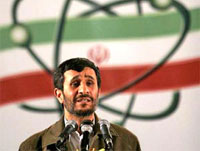 Why we need not fear Iran

We need to keep our calm with Iran. Our government has an impulsive tendency to squash mosquitoes with TNT. Ahamadinejad is more of a figurehead in Iran than anything else. The real power belongs in the hands of Iran's religious leaders and many of them, as well as Iran's population, are sympathetic to the U.S. and the West. We have an U.S. administration that doesn't understand geo-social complexities.

Others have argued well that Iran is not going to attack Israel with a nuclear weapon. This would not only hurt Israelis but the fallout would hurt Palestinians and surrounding Arab populations as well, not to mention retaliation towards Iran and total devastation of its economy which Iran deeply cares about.

It is not even necessary to make a first strike against Iran for the survival of the West or even Israel. If Iran strikes first there would be no world condemnation for Israel or the West to retaliate. But if we, out of foolish "cowboy" mentality, attack first there will be a huge price to pay.

Iran 's show of might is more for gaining pride in the Muslim world than anything else. Ahamadinejad is playing a psychological game with his words. Remember he is a figurehead!

If it had not been for Pakistan neither Iran nor North Korea would have had nuclear technology. We have been way too soft on Pakistan, the real culprit in the region.

The author, Babu G. Ranganathan, has his B.A. degree with concentrations in theology and biology, and has been recognized for his writings on religion and science in the 24th edition of Marquis Who's Who In The East. The author's website may be accessed at www.religionscience.com .