END the US Blockade of Cuba!

What are its justifications? Will it ever end? Is it not based on crass hypocrisy? The embargo, which is a genocidal policy of annihilation, does not differentiate between adult and child, man or woman. This US action is a crime against international law and the UN Charter which contain many provisions regarding doing no harm to civilian populations and territorial sovereignty. 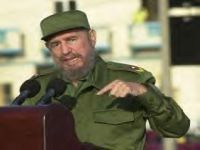 END the US Blockade of Cuba!

The US blockade of Cuba prohibits most Cubans from visiting the US and restricts diplomats from Cuba to only visiting New York City and Washington DC. Along with the ban on American citizens traveling to Cuba, the imposed embargo seeks to cut off communication between Americans and Cuba. A good number of websites from Cuba are blocked on the Internet. This economic, trade and financial embargo imposed on Cuba by the US is the longest in recorded history.

The objective of the embargo is to destroy the Cuban Revolution, make the Cuban people suffer from starvation and deprivation, thereby causing them to revolt against the government which sustains them. The empire wishes to destroy Cuba’s free and independent way of life, free from the drug trafficking, prostitution and exploitation which marked the unfortunate history of the Cuban people prior to the revolution. The capitalist ruling class in the US continues their Cuba embargo, not because it is effective or successful, but because of their hatred for the concept of SOCIALISM.

Over forty years old now, the embargo was first imposed in 1960 at the height of the Cold War after the young newly formed Cuban government expropriated US corporate assets and established ties with the Soviet Union. Cuban support for anti-colonialist and revolutionary struggles around the world reinforced the influence of anti-Castro forces in Washington, but the embargo has endured largely due to immense political pressure from Cuban exiles in Florida, a key electoral state.

The “Cuban Assets Control Regulations”were issued by the U.S. Government on July 8, 1963 under stipulations regarding “Trading With the Enemy.” Still in force today, these sanctions affect all US citizens and residents, all people and organizations physically in the United States, and all branches and subsidiaries of US organizations throughout the world. The goal of these sanctions is to isolate the Cuban government economically and deprive it of US dollars. Criminal penalties associated with the sanctions range up to 10 years in prison, $1,000,000 in corporate fines and $250,000 in individual fines.

It is odd that the empire, smugly and arrogantly preaching freedom of speech, freedom of movement and democracy, uses as its weapons of choice stifling freedom of speech and association, stifling freedom of movement and uses arm twisting and blackmail on other countries to get them to cooperate in their efforts to stifle, starve and choke the Cuban population while claiming they want to bring them “freedom” and “democracy.” It becomes obvious that this is nothing but empty rhetoric and Orwellian doublespeak: War is Peace, Freedom is Slavery, Ignorance is Strength. Orwellian doublespeak seems to be the resumé of the empire.

The empire holds itself above all others, refusing to speak, to negotiate, to debate or dialogue with those it considers “hostile.” Of course, generally speaking, the empire’s perception of hostility is one-sided and predetermined based on greed and lust for resources and profits.

Most sensible, decent people know that only by talking, dialogue, debate and discussion can complex problems get solved. But this won’t do for the empire, as they have no interest whatsoever in obtaining a peaceful, equitable or just solution.

Today Cubans enjoy the best living conditions in all of Latin America. Unique among the developing world, Cuba has implemented sweeping social welfare programs along with its market economics. Cuba has biannual municipal elections and the people elect deputies once every 5 years. Cuba sends doctors and medical assistance all over the globe, wherever there is a need.

Cuba is not a police state. It maintains links with all Latin American and countless other nations, capitalist or not. There is a flow of ideas and people constantly occurring. It is obvious that Cuban Socialism is vastly superior to what Latin America was used to: colonialism and imperialism.
Tactics against Cuba have varied from military options (Bay of Pigs Invasion 1961), to clandestine operations (such as many attempts to assassinate Fidel Castro). Military and financial support for dissidents have been provided, as well as political support (anti-Castro Cuban-American organizations, anti-Castro radio and TV broadcasts from Miami to Cuba).

As many as 184 countries voted in favor of a General Assembly resolution demanding the US lift its restrictions on international trade with Cuba lastyear. Year after year, the empire sees the international community rejecting its inhuman, unjust demands.

The UN with its overwhelming vote expressed concern over "the promulgation and application by member states of laws and regulations whose extra-territorial effects affect the sovereignty of other States and the legitimate interests of entities or persons under their jurisdiction, and the freedom of trade and navigation" and called upon all countries "to refrain from promulgating or applying" such laws and measures "in conformity with their obligations under the Charter of the United Nations and international law" and urged states that have such laws to repeal them

In 1996, the EU Council of Ministers adopted a Regulation and Joint Action to protect the interests of residents of the EU against the extraterritorial effects of the Helms-Burton Act. The European Union voted in favor of the resolution. US measures against Cuba were deemed “not acceptable” because the provisions contained in the 1992 Cuban Democracy Act and the 1996 Helms-Burton Act put limits on EU countries’ trade relations with Cuba. The EU is supposed to quietly accept unilateral measures imposed by the US?

Bills in the US Congress have been introduced every year and have been pending for many years to repeal the embargo against Cuba and the Helms-Burton Act (it states specifically “to seek international sanctions against the Castro government in Cuba, to plan for support of a transition government leading to a democratically elected government in Cuba, and for other purposes“). This absurd piece of supercilious excrement is extraterritorial in its scope, meaning that the US assumes the “right” to penalize countries that trade with Cuba. Other measures pending to ease restrictions are:

HR. 217 to lift the trade embargo on Cuba

HR 654 to allow travel to Cuba

These measures have had very substantial and increasing support, but votes with full debate with one partial exception have never been allowed. The embargo and travel restrictions have to be voted on each year.

Despite free medical care, Cuban health personnel report an increase in some infectious diseases, an increase in iron deficiency anemia among pregnant women and young children, and a rise in the incidence of low birth weight babies directly attributable to problems in importation of food supplies; and the epidemic in late 1991 in Cuba is probably partly the result of nutritional deficiencies.

In November 2000, a bill was voted on finally that would allow medicine and nutritional food to be sold to Cuba, which passed in both chambers by large margins only to be overturned in conference by the addition of two provisions tacked on by Miami Congressman Diaz-Balart, which prohibited normal use of credit in sales to Cuba and "codified" the unconstitutional travel restrictions (completely unrelated to the bill which had been voted on), which was then signed into law by Clinton in that form.

What can be concluded from this situation? The Second Declaration of Havana, signed by more than one million Cubans and issued February 4, 1962 puts it like this: "What does the Cuban revolution teach? That revolution is possible."

These words are more compelling today than ever, in a world of savage inequality that leaves some 3,000 people dead every hour in the Third World for lack of clean drinking water, vaccinations costing just a few cents, and a quarter's worth of food. This has become a world where an economic recession in the empire threatens devastation and massive worldwide starvation for the billions that it dominates. This growing worldwide consensus against the empire must rise up, raise its collective voice and demand an immediate and complete end to the embargo and sanctions against Cuba.