Senility and politics are a pathetic mix. There is no better example of this than Republican presidential hopeful Senator John McCain. In a recent campaign speech, billed as a major foreign policy statement, McCain seemed to think that he was breaking news when he declared: “Russia and the United States are no longer mortal enemies!” After half a dozen interruptions by hecklers opposed to the Iraq war, he was finally allowed to expound on this new pearl of wisdom. “As our two countries possess the overwhelming majority of the world’s nuclear weapons, we have a special responsibility to reduce their number. I believe we should reduce our nuclear forces to the lowest level we judge necessary, and we should be prepared to enter into a new arms control agreement with Russia reflecting the nuclear reductions I will seek.” 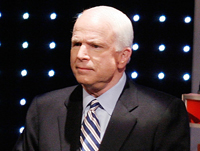 Such noble sentiments, about a decade past due, are still shocking coming from this heretofore clueless old man. During an April 2006 interview on NBC’s Meet the Press, this same John McCain forcefully suggested that the United States “Should respond harshly to Russia’s anti-democratic actions.” Again, in the June 4, 2007 issue of Business Week, McCain was asked directly : what about Russia—friend or foe? His answer : “ Russia is probably the greatest disappointment in recent years. It has turned into a KGB oligarchy. Putin wants to restore the days of the Old Russian Empire, and he continues to repress democracy, human rights, and freedom of the press. Mysterious assassinations are even taking place. If oil were still $10 a barrel, Mr. Putin would not pose any kind of a threat. I do not believe you will see a reigniting of the Cold War. But I do believe that Putin and his cadre of KGB friends are causing us great difficulties in a variety of ways, including a failure to assist us in trying to rein in Iranian nuclear ambitions.”

And yet again, writing in the November/December issue of Foreign Affairs, McCain was harsher still. “We need a new Western approach to this revanchist Russia. We should start by ensuring that the G-8, the group of eight highly industrialized states, becomes again a club of leading market democracies: it should include Brazil and India but exclude Russia.”

An amyloid-soaked brain is the best-case excuse for such hypocritical hyperbola. Setting truth and myriad self-contradictions aside for the moment, how can anyone with a quorum of working neurons think that they can kick Moscow in the teeth again and again, even threaten to boot Russia from the G-8, and still be a credible partner in any discussion about nuclear disarmament?

McCain would have done far better to keep his drooling tongue behind his yellow teeth. Because no matter what the Senator from Arizona says now, the World can only believe that any McCain administration would view the Kremlin as if were still in 1947 and needing containment. Once freed from quagmires in Iraq and Afghanistan, such leadership would likely re-direct all of its time-warped attention back onto Russia. No wonder Moscow races to secure its interests in the former Soviet Union before the Americans can extradite themselves from Iraq. In direct contrast to McCain (and Senator Clinton too, for that matter), Senator Barak Obama has carefully avoided all such harsh anti-Russian rhetoric. Like Russia’s own Medvedev, he is young, represents the more liberal elements of his party, and is more deeply associated with the possibility of real change. An Obama Administration would signal dramatic improvement in the relationship between Washington and Moscow, as well as with most of the rest of the World.

Sadly, since the demise of the Soviet Union, the relationship with Moscow has all but fallen off the radar screen as an issue in American elections. This is most unfortunate, because history shows that an inability to rationally differentiate friend from foe has dire consequences. The Bush/McCain policy of irrational hostility towards Moscow, concurrent over the last decade with a foolish coddling of Beijing, may be especially costly. The world’s insatiable demand for cheap consumer goods and China’s ruthless exploitation of its own people have allowed Beijing ’s military investments to grow faster than any other country over that same period. Recently, China has completed construction of the World’s largest underground submarine tunnel at its Yalong naval base in Sanya, in the South China Sea.

China has also built the world’s most advanced nuclear submarine, the 094 type SSBN, which probably incorporates pirated Russian technology . Satellite photos taken just this February confirm the depolyment of this highly advanced weapon of mass destruction at Yalong. The only strike targets in that theatre requiring such firepower would be Hawaii and the southwest coast of the United States. Succinctly, the cost to America of the Bush/McCain policy may well be the Pacific Ocean.

In all her 200-plus year history, America has never suffered such a reverse. In the face of this potential catastrophy, John McCain blithly dithers between concerns over democracy in Russia and a new arms control deal with Moscow!? That Senator McCain is simply too old and too senile to be President of the United States may be kindest thing that one can say.