Africa Day or Jump on the Bandwagon Day?

Bob Geldof was heavily criticised in Lisbon recently for declaring in a speech that Angola is run by a bunch of criminals. Rightly or wrongly, his words based on fact or mere hearsay, he decided to speak out instead of adopting the sickening and cowardly softly-softly attitude adopted by those non-Africans who use the Continent and its peoples as a buzzword for personal gain. 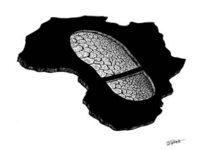 Africa Day or Jump on the Bandwagon Day?

This is why this article was not written on 25th May, Africa Day, and that is why this column will never, ever again by published on 25th May. Because Africa and Africans, for many people, many firms and many publications, have become a focal point for those who wish to find a cause to promote themselves, to finance their own lifestyles and to gain a neocolonial foothold in the Continent their forebears collectively helped to destroy.

This is not to say that one cannot find those with good and noble intentions and who really care about Africa, those who feel in their hearts that Africa is not lost and who do what they can to help. Bob Geldof is perhaps one of the best known of these, Bono is another and there are thousands more, less known in the international community, but whose efforts are just as valid.

Therefore it is not by having an Africa Day that anything will change, because Africa Day was founded as Africa Freedom Day exactly 50 years ago, in 1958 (the name was changed to Africa Liberation Day in 1963 when the Organization of African Unity was set up, an organism replaced in July 2002 by the African Union).

Half a century ago, and what has changed?

Every year the Commission of the Africa Union chooses a theme for Africa Day. In 2006 it was “Working together for Integration and Development,” in 2007 it was “Let´s strengthen Africa’s place in the world through strategic, balanced and responsible partnerships” and this year, it is “Meeting the Millennium Development Goals on water and sanitation.”

Nice words, good intentions. Of good intentions, the cemetery is full. Africa Day has therefore become a Continental Christmas Day, a day to send a Christmas card, open a present and wallow in a quagmire of false platitudes which serves to make the other 364 days more bearable.

Africa Day has existed in one form or another for fifty years. Africa has been on the agenda of the G8 for three years, one thousand days. Yet in vast swathes of the Continent, education programmes on AIDS have failed, extreme poverty has increased, community hygiene is non-existent. Slums are mushroming, insecurity is rife, violence has reached the most shocking levels, not only in Darfur, whose conflict enters its fifth year and where the situation worsens by the day.

Environmental degradation has reached disastrous proportions, the disease burden has become unbearable, water and sanitation networks are breaking down faster than they are being implemented, deforestation destroys 53 million hectares of forests a year, every year.

Access to healthcare services and education is decreasing, high food prices are creating a new generation of under-nourished children...in short the buzzword for Africa, today, fifty years after the creation of Africa Day is not “optimism” but rather, “daunting”.

Therefore it is time for action and not words. Africa Day is an excuse for those who wish to jump on the bandwagon to remind the rest of the world that they exist and thereby perpetuate their existence.

Africa must be much more than just a buzz-word for people to take advantage of because it is “cool” to go and adopt a black kid from Malawi or “in” to make money out of being involved in some way with “Africanism”.

For what happened to the Jews, they invented the word Holocaust.

And what of Africa’s Holocaust, “slavery”? What of centuries of imperialism and colonialism which created one-way paths for Africa’s resources – outwards? What of the digital divide, what of the millions of people without any possibility to place food on the family table? How can Africans have equal chances when they pay more for less, when they have to pay extra tariffs to sell their produce and when farmers from the so-called “developed” world (at whose cost?) receive subsidies to produce, or even not to produce?

These are the fundamental questions which are raised time and again in international conferences, seminars, meetings and summits. True, they make wonderful soundbites. And great excuses for more of the same on Africa Day. But it is time for more, i.e. full-scale empowerment of Africa’s institutions under the African Union and NEPAD with goodwill and resources, not just hot air and promises.