Are US Republicans Sane?

One has to wonder when listening to George Bush, Mike Huckabee and John McCain, how did these “men” get the positions they have when they are so obviously not in possession of their full mental faculties. Indeed, both Bush and McCain behave like sociopaths. There will be more on John McCain at a later date, but for now…. 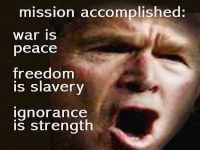 Are US Republicans Sane?

Let’s start with the recent words of George Bush. Never mind his immoral, genocidal, illegal and disastrous wars in Iraq and Afghanistan. In a speech to Israel's Knesset, Bush said: "Some seem to believe that we should negotiate with the terrorists and radicals, as if some ingenious argument will persuade them they have been wrong all along,” Bush went on further to say, ”We have heard this foolish delusion before. As Nazi tanks crossed into Poland in 1939, an American senator declared: ‘Lord, if I could only have talked to Hitler, all this might have been avoided.’ We have an obligation to call this what it is — the false comfort of appeasement, which has been repeatedly discredited by history.”

A strong case could most certainly be made that George Bush is skating on very thin ice to be making references to Nazis or Hitler, given his family connections to Nazi leadership and his disgusting fascist behavior. In other words, it is certain that George Bush, aside from being known as the worst president his country ever had will also be known as one of those evil, totalitarian dictators and Hitlers that fill all decent human beings with disgust and revulsion.

Most commentators have seen through Bush’s inane ramblings (of which there certainly has been no shortage in the past) for what they are: an attack on Senator Barack Obama who has said that he would meet with “enemy” leaders. In response to George Bush, Senator Obama said through a statement his aides distributed:

"It is sad that President Bush would use a speech to the Knesset on the 60th anniversary of Israel's independence to launch a false political attack. George Bush knows that I have never supported engagement with terrorists, and the president's extraordinary politicization of foreign policy and the politics of fear do nothing to secure the American people or our stalwart ally Israel."

Joe Biden, Chairman of the Senate Foreign Relations Committee, said that the president was out of line: “This is bullshit, this is malarkey. This is outrageous, for the president of the United States to go to a foreign country, to sit in the Knesset ... and make this kind of ridiculous statement.”

“He is the guy who has weakened us,” he said. “He has increased the number of terrorists in the world. It is his policies that have produced this vulnerability that the US has. It’s his intelligence community that has pointed this out, not me.”

Even Hillary Clinton refused to take part in the insanity. “President Bush’s comparison of any Democrat to Nazi appeasers is offensive and outrageous on the face of it, especially in light of his failures in foreign policy,” Clinton said. “This is the kind of statement that has no place in any presidential address.” When a reporter reminded the New York senator that she too has criticized Senator Obama for his statements on meeting with Iranian leaders, Clinton said, “I have differences with Senator Obama on certain foreign policy matters, but I think we are united in our opposition to the Bush policies and to the continuation of those policies by Senator. McCain.”

Clinton continued, “I disagree that any president would ever meet with a leader of a country which we have such deep and profound differences as Iran, for example. However I believe there should be diplomatic engagement, which President Bush has resisted from the very beginning. So I think that I have more in common with Senator Obama and the Democratic position in our understanding of what we have to do to re-engage with the world.”

Nancy Pelosi, Speaker of the House, said Bush’s remark was “beneath the dignity of the office.”

Now for the lunatic fringe…

John McCain, the presumptive presidential nominee for the Republican Party, stood with his mentor: “The president is exactly right,” said McCain, about his assertion that opening up talks with modern day terrorists was the same as appeasing Hitler and the Nazis.”

"It is a serious error on the part of Senator Obama. It shows naiveté and inexperience and lack of judgment to say that he wants to sit down across the table from an individual who leads a country that says that Israel is a 'stinking corpse' that is dedicated to the extinction of the state of Israel. My question is, what does he want to talk about?" Both Bush and McCain frequently attack Mahmoud Ahmadinejad for threatening Israel and believe he must be stopped from developing a nuclear weapon, a goal Iran denies.

Joe Lieberman, the Democrat-turned-Independent senator who supports McCain (some suggest he might be McCain’s running mate), defended Bush as well.

“President Bush got it exactly right today when he warned about the threat of Iran and its terrorist proxies like Hamas and Hezbollah. It is imperative that we reject the flawed and naïve thinking that denies or dismisses the words of extremists and terrorists when they shout “Death to America” and “Death to Israel,” and that holds that — if only we were to sit down and negotiate with these killers — they would cease to threaten us. It is critical to our national security that our commander-in-chief is able to distinguish between America’s friends and America’s enemies, and not confuse the two.”

Mike Huckabee, who is also backing McCain after his unsuccessful presidential bid, also had a psychotic moment in Louisville, Kentucky, in front of the National Rifle Association. An unexpected offstage noise prompted him to make the statement: “That was Barack Obama, he just tripped off a chair, he's getting ready to speak,” said the former Arkansas governor, to audience laughter. “Somebody aimed a gun at him and he dove for the floor.”

Meanwhile, John McCain made a speech where he sounded absolutely detached from reality and delusional. He painted a scenario of what would be during his hopefully mythical presidency.

“US troops would be home from Iraq by 2013 after the war would be won under his watch. Osama bin Laden would be captured or killed, and that the threat from the Taliban in Afghanistan would be greatly reduced under his stewardship.”.
"By January 2013, America has welcomed home most of the servicemen and women who have sacrificed terribly so that America might be secure in her freedom. The Iraq War has been won. Iraq is a functioning democracy, although still suffering from the lingering effects of decades of tyranny and centuries of sectarian tension."

What happened to his 100 years? It must have been shown to be unpalatable to voters,

It’s pretty well known that politicians lie, but this guy really believes this stuff. The world, as well as the US, is in deep trouble should John McCain win the election. All will breathe a deep sigh of relief when the regime of George Bush and his reign of terror comes to an end next January, barring any unforeseen circumstances.