As the polls closed in North Carolina, Senator Barack Obama was immediately declared the winner. Soon after, Senator Obama made an incredibly stirring victory speech. He was clearly feeling a sense of relief, as once again momentum swung back in his favor with a decisive and commanding victory. The numbers, the math, the dynamics have been set. With 99% of precincts reporting in North Carolina, Obama received 888,269 votes or 56% of the vote (58 delegates) and Clinton received 655,169 votes or 42% (42 delegates). 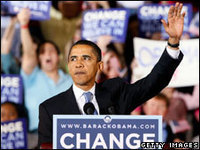 "This has been one of the longest, most closely fought contests in history," Obama said at a victory rally in Raleigh, NC. "And that's partly because we have such a formidable opponent in Senator Hillary Clinton."

In an apparent answer to Clinton's criticism that he is ill-prepared to withstand Republican attacks, Obama said: "The question, then, is not what kind of campaign they'll run, it's what kind of campaign we will run... I didn't get into race thinking that I could avoid this kind of politics, but I am running for president because this is the time to end it."

“It's the idea that, while there are few guarantees in life, you should be able to count on a job that pays the bills, health care for when you need it, a pension when you retire, an education for your children that will allow them to fulfill their God-given potential, that's the America we believe in. That's the America that we know.”

The useful idiot corporate elitist media desperately tried to claim a big Clinton win in Indiana early in the evening, but as the results came in, the margin of lead continued to close. Announcements were made that final tallies would only come in extremely late into the night.

This was following an intensive and transparent media campaign to promote the objectives of the Clinton camp and disparage Senator Obama, leading up to the Pennsylvania primary and continuing even more intensely leading up to the May 6th primaries. Ultimately, Clinton barely managed to get by in Indiana winning 51% of the vote (37 delegates) to Obama’s 49% (33 delegates).

Senator Obama chalked up a win in the Guam caucus over the weekend, but delegates were evenly split between the two candidates at 2 each.

Republicans also held primaries in both states which were predictably won by John McCain. He received 78% of the votes in Indiana and 73% of the votes in North Carolina. More than 20 percent of those who voted in the Republican primary in Indiana voted for someone other than Senator John McCain, the party’s presumptive nominee.

Six more contests remain. Only landslide victories would give Clinton a chance for the nomination. The race continues in West Virginia next Tuesday, where 39 delegates are undecided. A week later, Kentucky and Oregon will have 60 and 65 delegates at stake.

"Absent some sort of miracle on May 31st, it's going to be tough for us," said a senior Clinton official who spoke on the condition of anonymity in order to be frank. "We lost this thing in February. We're doing everything we can now, but it's just an uphill battle."

Hillary Clinton, like George Bush, doesn’t have an exit strategy as the nomination seems more and more likely to be out of her reach, despite all of her desperate, underhanded and unscrupulous tactics. When the night was over, Senator Barack Obama was closer than ever to his party’s nomination.

The night’s results also counter the idiocy being pronounced so much by Clinton about Obama’s inability to “close the deal.” It is increasingly apparent that it is she who cannot “close the deal.” This was Clinton’s last chance to win a significant number of delegates. It is now mathematically impossible for Clinton to overcome via pledged delegates alone.

Some news headlines the next morning:

In a late-night speech, Clinton said that "it would be a little strange to have a nominee chosen by 48 states." She is still insisting on the lion’s share of delegates from Michigan and Florida, even though hers was the only name on the ballot in Michigan and neither candidate campaigned in these states.