If spoken words were to audibly echo throughout time and celestial space, surely one of the most compelling and most eloquent of those would be the Martin Luther King, Jr. speech, “I Have a Dream!” 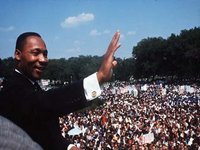 "I have a dream that one day this nation will rise up and live out the true meaning of its creed 'We hold these truths to be self-evident, that all men are created equal'," In front of 250,000 people gathered at the Lincoln Memorial in the US capital in 1963, Dr King told gave his memorable speech. "I have a dream that my four little children will one day live in a nation where they will not be judged by the color of their skin but by the content of their character."

"Let freedom ring. And when this happens, and when we allow freedom ring—when we let it ring from every village and every hamlet, from every state and every city, we will be able to speed up that day when all of God's children—black men and white men, Jews and Gentiles, Protestants and Catholics—will be able to join hands and sing in the words of the old Negro spiritual: "Free at last! Free at last! Thank God Almighty, we are free at last!”

This April 4th marked 40 years since the voice was silenced. Or was it? Dr. King was a charismatic and brave hero battling for racial equality from the 1956 bus boycott in Montgomery, Alabama to non-violent protest marches in the 1960s. Time Magazine honored Dr. King as "Man of the Year" with a feature story and cover photo, January 3, 1964.

A Nobel peace prize winner, Dr. King was just 39 years old on that fateful Friday, April 4, 1968. At 6:01 p.m., a shot rang out. Dr. Martin Luther King, Jr., who had been standing on the balcony of his room at the Lorraine Motel in Memphis, Tennessee, lay sprawled on the balcony's floor mortally wounded with a gunshot wound to his jaw and neck. A great man who dedicated himself for thirteen years to nonviolent protest had been cut down by a sniper's bullet.

Violence and controversy followed. In outrage of the murder, many blacks took to the streets across the country in a massive wave of riots.

These events followed a grisly history of slaves brought over from Africa to live lives being treated as less than human. Subject to the will of slave masters and later, after slavery was abolished, in the deep south of the US, blacks were told not to eat where whites eat, not to get a drink of water where whites go and not to use the same bathroom facilities or hotel facilities. They were to be remanded to the back of the bus, the seats in the front to be reserved only for whites.

In Montgomery, Alabama, on December 1, 1955, Rosa Parks, an African-American seamstress, was arrested for not standing and letting a white bus rider take her seat. When asked to move, Mrs. Parks refused. She did not argue and she did not move. The police were called and Mrs. Parks was arrested.

Riots broke out on the campus at the University of Mississippi, on September 30, 1962, requiring 12,000 federal marshals to restore order when James Meredith enrolled at the Oxford Campus under court order.

Governor George Wallace stood in the door of the University of Alabama, refusing the entrance of Black students on June 11, 1963.

Riots in the Watts district erupted in California, August 11 and 12, 1965. The National Guard was called in to put down worst single racial disturbance in the US. Thirty-five people died.

The National Guard was called in when Summer Riots, between July 18-23, 1966, broke out in Omaha, Nebraska, Chicago, Illinois, Cleveland and Dayton, Ohio.

Riots took the lives of forty-three, including 324 injured in the home of Motown music, Detroit, Michigan. Twenty-three died and 725 were injured in the Newark, New Jersey riots. Dr. King, Roy Wilkins, and Whitney Young, Jr. came out in an appeal to stop the riots that took place from May 1 through October 1, 1967.

The riots scared the country like nothing before or since.

Shortly after John Kennedy was elected in 1961, he began a quest for civil rights and racial equality. Following this assassination of yet another civil rights crusader, President Lyndon Johnson challenged Congress to pass the civil rights legislation that had been deadlocked at the time of Kennedy’s death. Dr. King publicly supported Johnson, saying that Johnson had taught him to recognize that there were “new white elements” in the South “whose love of their land was stronger than the grip of old habits and customs,” and expressed optimism that Johnson’s term would benefit African Americans. On July 2, 1964, Lyndon Johnson signed the Civil Rights Act of 1964, a bill he hoped would “eliminate the last vestiges of injustice in America” Dr. King stood behind Johnson as he signed the bill into law.

Today the US is still beset with many problems of social inequality. "We have among blacks, more unemployment, 2.5 million African-Americans in jail. We have an unfunded moral imperative to invest in healing the structural inequality," according to civil rights leader Jesse Jackson.

Now some 40 years after Dr. King‘s murder, Senator Barack Obama is the first African-American to have a real a chance of becoming the country's first black president. Reverend Jackson says the candidacy of Barack Obama shows that the country is less reactionary when it comes to race. "I see the seeds Dr. King sowed bearing fruit today. The massive white vote for Barack; he is the conduit through which the newer, better America is expressing itself."

Last year's “Jena 6” case illustrates that African-Americans continue to struggle for equal justice. The case involved six black teenagers who were charged with assaulting a white classmate in Jena, Louisiana after a noose was found hanging from a tree. Many people viewed the charges against the teens as excessive and racially motivated. As a result, national protests involving thousands of people, including the Reverend Al Sharpton, marched in the streets of Jena.

"The reason we were able to get 30,000 in Jena is because people see the disparity in the criminal justice system," Sharpton says. The incarceration rate among black men remains a huge problem. The incarceration rates for blacks are higher today than they were in the mid-'60s. According to the Bureau of Justice Statistics, at the end of 2006, there were 3,042 black male prisoners per 100,000 black males in the U.S., compared with 487 white male prisoners per 100,000.

On the occasion of the anniversary of the assassination of Dr. King, Senator Barack Obama, campaigning in Indiana, held a moment's silence at the beginning of his rally saying that "through his faith and courage and wisdom, Dr Martin Luther King moved an entire nation. When he was killed ... it left a wound on the soul of our nation that has not yet fully healed."

Now, almost 45 years after Dr. King’s infamous speech, America is a land of contrasts, with some dreams fulfilled while many others are unresolved. "You see the signs of change," says the Rev. Jesse Jackson, "The change is not complete and it is in some cases slow, but we see evidence of morning time."

Amid the disingenuous criticism suggesting that Barack Obama should have cut himself off from Reverend Jeremiah White for his rhetoric is the lack of understanding for the experiences of countless individuals such as Reverend White. Time will tell how far the country has advanced towards positive change. This presidential election campaign will be a good barometer of the change factor.