It has already been pretty well established that there is nothing that Hillary Clinton won’t do to get elected, be it racist comments, slandering her opponent and pretending she has all this experience, when in truth it is only experience with failure and experience in lying. Now for the granddaddy of them all…her lie about coming under sniper fire in Bosnia. 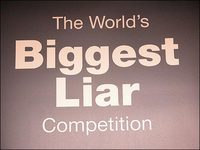 Mrs. Clinton has been caught telling a whole string of lies. She claims that as first lady she “helped pass the Family and Medical Leave Act.” Actually, Senator Chris Dodd was the author and worked for its passage beginning in 1986, which is six years before Bill Clinton was elected. It was passed twice by Congress during the presidency of President George H.W. Bush, and vetoed both times. When Clinton ran for present, he merely promised to sign the FMLA.

Bill Clinton signed the FMLA only 16 days after being sworn in on February 5, 1993 - and there is no evidence whatsoever that Hillary played any role in helping it get passed by the Democratic Congress. Given that Bill Clinton promised to sign it during the ‘92 campaign, Hillary can’t even argue that she even helped persuade him to sign it.

All through debates and her presidential campaign, Hillary Clinton has been saying to everyone, "I have been a critic of NAFTA from the very beginning." Now that we know from 11,000 pages of Clinton White House documents released this week that Hillary Clinton was an ardent advocate for NAFTA. She held at least five meetings to strategize about how to win congressional approval. Hillary Clinton was in the thick of the maneuvering to block the efforts of labor, farm, environmental and human rights groups to get a better agreement.

Now official records of her time as First Lady show that Clinton was the featured speaker at a closed-door session where 120 prominent women were lobbied by Clinton to pressure their congressional representatives to approve NAFTA. ABC News reporting on the session reveals that "her remarks were totally pro-NAFTA" and that "there was no equivocation for her support for NAFTA at the time;" these details have now been completely confirmed,

Last but certainly not least, Hillary Clinton actually has been telling people for some time about the trip she and her daughter went on to Bosnia accompanied by Cheryl Crow and Sinbad. She said they were shot at by snipers and that they had to run to waiting cars. It is total fabrication. Sinbad recalls no such thing and there is video footage of Chelsea and Clinton walking across the tarmac smiling and waving. Hillary lied to people about the experience and her campaign is now saying that she misspoke. Some advisers are saying that it is hard to remember all the details when there have been so many trips and it was so long ago. INCREDIBLE! If you are shot at you will never forget it, and if you have to take evasive maneuvers you will never forget it. If your child is in that kind of danger, you will never forget it. Hillary Clinton lied and that is the truth.

Interestingly, the media is just now picking up on this as if Hillary only said it for the first time. Clinton has been telling this story for some time. Anyway, you tell the American public you faced gunfire, and all you really faced was a child with flowers -- that's demonstrating a shocking inclination to be dishonest. Does the international community and especially her own country want a president that always lies to them?

Will the agenda-driven still attempt to get Hillary elected?

Will agenda-driven voters still vote for her knowing full well the woman is a pathological liar? Will voters in the US vote for 4 or 8 more years of the same? No answer needed…just look at the last nightmarish 8 years of the Bush presidency. Hillary Clinton is hardly the person to put a more human face on her country. The thought comes to mind: Woe to the international community if this screeching liar ever comes to be the most powerful (finger on the nuclear trigger) woman in the world.

Hotspots and Incidents
The status of the special operation in Ukraine likely to be changed after referenda
World
Scale of destruction at Nord Stream estimated as unprecedented
Politics
What to expect from Putin's Address to Federal Assembly on September 30?

What to expect from Putin's Address to Federal Assembly on September 30? Alexander Shtorm
Russia
Consul of Japan caught red-handed for espionage in Russia
World
Turkey's decision on referenda will not ruin Ankara's ties with Moscow

Europe
Lavrov at UN General Assembly: No more exceptionalism and unipolar world
16:54
Referenda in Luhansk, Donetsk, Kherson and Zaporizhzhia regions completed
16:37
Anti-terrorist operation will give the upper hand to the Russian Army
15:03
Kremlin: Russia still ready for talks with Ukraine, but conditions have changed
13:30
Russian and Chinese warships spotted off the coast of Alaska
12:57
Global Times: The Fed causes world to experience 'economic earthquake'
12:33
Scale of destruction at Nord Stream estimated as unprecedented
20:14
September 2022: Where are we (going)?
19:40
Turkey's decision on referenda will not ruin Ankara's ties with Moscow
19:16
Putin grants Russian citizenship to Edward Snowden
19:00
Consul of Japan caught red-handed for espionage in Russia
РусскийDeutschFrançaisPortuguese