Why did the terrorist narcotics trafficker Uribe assassinate Raul Reyes? 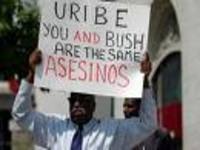 Why did the terrorist narcotics trafficker Uribe assassinate Raul Reyes?

Raúl Reyes was the principal FARC negotiator with the governments of Venezuela and France for the prisoner of war release and in the search of an area for increased peace negotiations with Colombia. Twice, ex-senator Ingrid Betancourt was supposed to be freed. In the first instance, the government of the terrorist narcotics trafficker Álvaro Uribe set up an armed ambush for the guerrillas who, on a mission of peace and to put right with the government of Colombia, were being tested to prove that the ex-senator was alive.

Documents, the personal letters of Ingrid's family had also been divulged by Uribe and this generated protests from the mother of Ingrid, her sister and her children. The Nobel of economy says that the cost of two weeks of war in Iraq might end illiteracy in the world . " If they knew that they would have to pay a cost of 3 trillion US$ with an uncertain result - perhaps there be peace in the Middle East, but perhaps not - they would say:

'Will it be that we cannot think about a better way of doing that?'

At the moment that Reyes was murdered, he was in the territory of Ecuador and negotiating with the French government through President Chávez and President Corrêa for the liberation of Betancourt. Uribe knew, Uribe had agreed as in the previous time, Uribe betrayed.

By the second time, Uribe had frustrated any perspective in this sense for the simple reason that he is not interested in the liberation of Ingrid Betancourt, his political adversary. The Colombian terrorist attack was done eight kilometres inside Ecuadorian territory and President Corrêa already protested and recalled his ambassador in Bogota, including affirming that the phone call from Uribe informing him about the military actions on the border of the two countries was "lies and audacious." Uribe did not say that the terrorist air force of the Colombia was attacking within the territory of Ecuador.

The President of Venezuela Hugo Chavez already warned the terrorist Colombian leader that if similar operations happened on the territory of Venezuela there would be war. Chávez is the principal negotiator for the release of Betancourt, he counts on the of support of the French government and of several other countries interested in finding a peaceful solution for the civil war in Colombia.

But beyond the pathetic media epic mounted by Uribe, in Colombia, today eighteen million (18'000.000) Colombian children and young people die and are put under cruel, cruel and degrading treatment, forced to live a life of misery, torrents of hunger, undernourishment and deprivations of all types. Lowered by the absurd war and physical hunger, thousands of children are exploited labor, forced into prostitution, begging, drug addiction, theft, to wander in the streets of the great capitals under the indolent glance of a State and a powerful minority class that shows and wastes the infinite wealth of the country while the children die of hunger in the streets without any type of protection and aid.

Daniel Ortega, President of Nicaragua, gave interviews in Manágua and condemned the terrorist action of the government of Uribe, affirming, among other things, that "Reyes was a negotiator and was negotiating the peace."

Ingrid Betancourt is only one participant in this complete play and Uribe is not interested that the ex-senator is set free. It is going to complicate the political process in Colombia and force the terrorist narcotics trafficker (who wants to change the constitution for one more mandate, the third) to accept negotiations with FARC.

European governments not aligned with the terrorist politics of Washington, Bush being the ruler of Colombia in truth, appear indignant with the terrorist action of Uribe's organization. The President of France, who is an ally of the United States, was sorry that the perspectives of peace have been interrupted by this insane action and that it violated international rights (Uribe operated in the territory of Ecuador), removing immediate and concrete perspectives of peace.

The FARC camp in Ecuador had the objective to broaden negotiations for the release of Ingrid Betancourt and other prisoners of war, after several FARC gestures in this direction, including the release of several prisoners of war in the last weeks, an example that is followed by another insurgent force, the Army of National Liberation (ELN).

The hypothesis of a Colombian terrorist action in Venezuela is not discarded and can be a part of the constant propaganda assault against the government of President Chávez. Simply remember that the United States had also armed the government of Saddam Hussein with chemical and biological arms for a war against Iran and also the leader of Al Quaeda, Osama bin Laden, to fight the troops of the former Soviet Union in Afghanistan.

This type of practice encompasses the sort of terrorist actions of the White House. Speeches about democracy, human rights, freedom, etc., fade in the concentration camps of Guantánamo, in Afghanistan (800 prisoners without formal charges), in the seizures practiced against Arab citizens in European countries (the CIA responds to processes in Italy and in Germany for actions of this nature) and in the definite authorization of the terrorist George Bush to use torture against prisoners who "threaten the interests of the United States."

The simple possibility of releasing Ingrid Betancourt, because it could begin to mean the perspective of peace negotiations in Colombia, frustrates the drug traffickers, in power since Uribe was elected the first time, contradicts North American interests, the biggest of them to take down Chávez and to seize the oil of Venezuela and to make use of effective bases in the Amazonian Region, another great objective of the terrorist organization, the White House and the groups that it represents.

Uribe is a person in the charge of the USA, of narcotics trafficking, a terrorist without bowels and respect, for what he wants is just like the Nazi government of Israel, he does not want peace, he is not interested peace, he does not intend peace. Around all the talk that exists insists that they are "businesses," only "businesses."

The principal television networks controlled by North American and Colombian terrorists already received instructions to feature the death of Reyes as being a blow to "FARC terrorism" and also, newspapers and magazines, immense and overwhelming most of the vehicles of communication in Latin America, Asia and Africa and a good part of Europe and so, are to hide the truth of the facts.

In the specific case of Brazil the NET GLOBE, in eagerness to increase the resources received from these terrorist organizations (the White House, Bogota, etc.), mounted special information to lie and sell the idea of democracy to the viewers that considers them idiots as ordinary Homer Simpsons.

It is the great briefcase of North American world-wide terrorism. Bush does not put together any "active body" of a trap, but he likes professionals decorating the White House with Christmas and Christian lights. It promotes a side, not reality.

Uribe murdered Reyes to make the peace negotiations and the release of Ingrid Betancourt difficult, at this moment, a symbol that can become the future of Colombia. It is not what Uribe wants, nor even Washington.

Exactly the case of the Nazi government of Israel regarding the Palestinians. Palestinian homes are destroyed by the terrorists of Israel in an attack on the Gaza Strip, at just the moment that Hammas proposes peace and 64% of the population of Israel says that they accept it. The Nazi terrorist Israeli State is not interested in peace, nor even in the narcotics trafficking of Uribe. "They are businesses" and they are "partners" in barbarity.