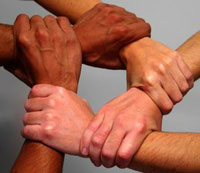 (Warning – Spoilers Below) . In this movie, set near the end of World War II, Waters is murdered near a racially segregated army base in Louisiana. Although initial suspicion falls upon the white populace, it is later discovered that Waters was murdered by his own men. As Wikipedia explains, Waters was the victim of what W.E.B. Dubois termed a “double consciousness.” Believing that the men under his command were the reason whites hated African-Americans in general and him in particular, Waters came to hate African-Americans as well, and did everything he could to degrade and abuse them.

Not surprisingly, Connerly and Thomas have found a receptive audience from white Americans who support the contention that affirmative action policies are “preferential treatment.” Yet, just as Thomas and Connerly’s arguments fail, so too does white America’s.

Even a cursory view of American society and culture proves that white Americans do not hate “preferential treatment.” They only hate when the “wrong” people are being preferred.

A somewhat humorous, but nonetheless excellent, illustration of this phenomenon occurred on Comedy Central’s Showbiz Show. Actress Gwyneth Paltrow had stated in an interview that even when she was a little girl, she always knew she would be “successful.” The Showbiz Show’s host David Spade then explained that since Paltrow’s mother is actress Blythe Danner, and since Paltrow’s father Bruce was a director, writer and producer, there were few obstacles standing between her and her so-called “success.”

But Paltrow is not alone. The worlds of entertainment, business and politics are overflowing with people whose alleged “success” is more the product of nepotism and cronyism than talent and ability.

Some examples: Supreme Court Justice Antonin Scalia routinely denounces affirmative action policies in his rulings, yet his son Eugene has a government position as Solicitor of the Labor Department; Janet Rehnquist, whose late father William also opposed affirmative action policies while serving as Chief Justice of the Supreme Court, was an Inspector General of the Department of Health and Human Services; and Michael Powell, son of former Secretary of State Colin Powell, served as the Chair of the Federal Communications Commission.

And one should not forget that America’s premier war criminal and illegal occupant of the White House, George W. Bush, has made a career out of denouncing affirmative action as “preferential treatment.” Yet—from his admission to Harvard, to his avoidance of combat service in Vietnam, to his illegal theft of the 2000 election with the aid of his brother Jeb—Bush’s entire career has been manufactured from his family’s wealth and influence. As the late Molly Ivins often pointed out, Bush was born on third base, but still wants Americans to believe he hit a triple.

Yet you never see these individuals trembling in a corner or shirking the limelight because they are embarrassed over how they’ve achieved their wealth and success. In fact you see quite the opposite. Celebrity-oriented (i.e. garbage) television has made a cultural icon out of Paris Hilton, who is famous for nothing but having the name of Hilton. Audiences cheer wildly when actors who are offspring of actors—like Kate Hudson, Ben Stiller, Charlie Sheen, Drew Barrymore, and others of their ilk—sashay across talk show stages to discuss their latest “project.” Even when Bush’s daughter Jenna appears on these shows, nobody asks her why she’s not fighting in the war that “daddy” started in Iraq.

Yet African-Americans are, for some inexplicable reason, supposed to feel some sense of “shame” for being aided by affirmative action policies, even though such policies are at least intended to bring about a more just society. If Americans in the poor and middle classes could remove the timbers from their eyes, they would see that many of those who criticize preferential treatment have also profited from preferential treatment.

So why have these critics been so successful in attacking affirmative action policies?

The answer is that most Americans never envision themselves competing with the Bushes or the Hiltons or the Barrymores, so they are not directly impacted by the preferential treatment these individuals enjoy. What most Americans compete for are the crumbs, in the form of employment opportunities, thrown from the tables of the rich and powerful. By turning race against race in the relentless competition for the fewer and fewer good paying jobs, Americans remain oblivious to the fact that the rich are continuing to keep the majority of the wealth concentrated in the fewest possible hands.

Decades ago, when President Dwight Eisenhower expressed reluctance to pursue civil rights legislation on the grounds that “You can’t legislate morality,” Dr. Martin Luther King Jr. replied, “[t]he law cannot make a person love me, but it can stop him from lynching me . . .”

But what if the person who cannot love others because of their race is in charge of hiring for a major corporation? Although he might be legally prohibited from lynching, he certainly is under no legal obligation to hire anyone he doesn’t want. And even if race or gender doesn’t play a role in his decisions, nepotism and cronyism often does, and these factors incessantly favor white males.

In capitalist societies that also purport to be “Christian,” one of the most ignored New Testament passages is when Jesus remarks, “[I]t is easier for a camel to go through the eye of a needle than for a rich man to enter the kingdom of God.” It is not the riches that create the difficulty but the man, the way he acquired these riches, the way he uses them, the way he treats others who don’t have them, that gives credence to Christ’s words.

In the maquiladoras of Juarez, Mexico, young women, working long hours for low pay, miles from home and family, are being murdered in staggering numbers. In times of war workers are often called upon to sacrifice by taking pay cuts or working long hours. During these same times of war companies often charge the government inflated prices for their goods and services. Workers are often required to display their patriotism by not striking or provoking labor unrest during wartime. Yet corporations are never required to demonstrate such patriotism, and will abandon a country without hesitation for cheaper labor markets abroad, unconcerned about the hardships their exodus creates, and with the audacity to turn around and sell their products in the very nation, and to the very people, they’ve abandoned. And in this milieu of greed and hypocrisy, race is turned against race by the mere utterance of the words “preferential treatment,” even as the wealthy unabashedly reap the benefits of nepotism and cronyism.

So if you really want to oppose preferential treatment, start at the top. Boycott the nepotism, cronyism and elitism that created the need for affirmative action in the first place. Don’t elect those whose only qualifications are their parents or spouse’s coattails; don’t view movies or television shows starring, or purchase products from, or shop at businesses owned by people who owe their success to nepotism and cronyism; learn to measure success, not by the wealth a person has, but by how he or she obtained it. Clearly an honest person who starts with nothing and accumulates thousands is more of a success than a scion of nepotism and cronyism who starts with millions and accumulates millions more.

Finally, stop being seduced into hatred and divisiveness by those who oppose affirmative action policies. Remember most of them only oppose “preferential treatment” when they are not the ones being “preferred.”