Boris Tadic, just re-elected in Sunday’s vote, favors signing an agreement with the European Union even if  they proceed to take over Kosovo's supervision as a prelude to recognizing the independence of the Serbian territory. Western media was saying that had Nikolic been elected it would be, “a return to the isolation of the 1990’s.” 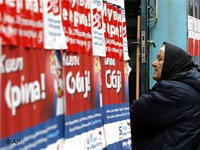 "Our problem is that the EU doesn't understand how much Kosovo means to us," Nikolic said in a recent interview. "I'd be first to back EU membership if they treated us like normal people, without conditions that were not set for others."

Nikolic says, "no more false promises," criticizing rivals seeking to be all things to all people. “They tell the West what it wants to hear, and at home they pretend to be great patriots," he said.

"They say we should join NATO, then want Russia's veto on Kosovo, they want to join the EU and also keep Kosovo. I am not prepared to lie like that." Welcome to the wonderful world of “superior” western values! It is essential that if one wishes to win an election with the nodding approval of the empire, one must definitely engage in the practice of lying and lying big.

Contrary to western corporate elitist media, Nikolic wasn’t planning on returning to isolation. In this campaign, Nikolic has been telling voters he wants Serbia to be a "link between the West and the East" and promoting a foreign policy of "cooperation not concessions."

The Serbs have decided not to make any changes in the current course of the country, still willing to listen to the demands of the EU and the United States, despite nearly 20 years of being ground under their heels, lied about, demonized, slandered and mercilessly bombed for 78 days.

Information has it that the Prime Minister of Kosovo, Hashim Thaci, promised to delay any proclamation of independence if the current president won. But it seems unlikely they will be delaying any longer, as it is believed when their first parliament convenes on February 6th that the declaration would take place at that time. The major Western powers are "pushing for February," according to some reports.

It is up to Tadic now to keep his word to the voters lest he expose himself as a possible traitor to Serbia’s national interests. Knowing the mood of the electorate, he could not promise the United States and the EU the unthinkable--to abandon Kosovo. In his victory celebration, he promised to take into account the views of Nikolic and his supporters.

The West is now put in a difficult position. They put tremendous pressure on Serbian voters. Now it is up to them to appreciate the fact that Serbia has demonstrated it is a bonafide, genuine democracy, unlike many of the regimes they currently support…such as the Albanian mafia regime in Kosovo. Most importantly, it is also up to them to now demonstrate respect and acknowledgement of international law and agreements they make, such as the UN Charter, UN Resolution 1244 and the Helsinki Final Act. Kosovo is sacred Serbian land and international law mandates that Serbian sovereignty over the province must be respected. Kosovo’s future should be a concern for Serbia and Serbia alone.