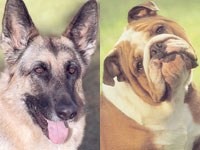 As I was walking down the road the other day I overheard a German Shepherd talking to a bull dog. I over-heard the German Shepherd saying to the bull dog "You can't possibly be a dog because you don't look like me! Why, just look at your flat nose and jaw, your round head, your stumpy neck, and short legs. You look more like a cat than you do a dog! Hey, is that your nose or your mouth? Hahahaha! Do you grow the ugly nappy hair that poodles have? How can anything that looks like you have the soul, intelligence, and feelings of a dog? Who gave you the right to be called a dog? Get out of my sight you ugly looking thing!"

I mention the above illustration to make a point to those who harbor racism. I hope that you will repent of your sin of racism, which is a great sin against God Who created all men in His image and has commanded all men to love one another, and that you will receive the love and forgiveness of God which is in Jesus Christ our Lord and Savior Who paid the penalty for all our sins through His death and shedding of His blood on the Cross of Calvary and Who rose again from the dead to give us eternal life.

The Bible says that Jesus Christ lived a sinless life on earth and that on the Cross He bore our sins in His own body and received the punishment from God (the Father) that we deserve for our sins and then He rose again from the dead. The Bible teaches that the penalty for even one sin is so great that we could never completely pay the penalty. Only God Himself is capable of fully paying for our sins and Jesus Christ Who is God (the Son) did just that on the Cross of Calvary. It was for us that Christ suffered and died on the Cross! Christ took it upon Himself to pay our debt. Because Christ took the blame and punishment for our sins, God (the Father) can be just in freely forgiving us of our sins when we genuinely repent and put our faith and trust in Jesus Christ alone to save us.

Young people, and even adults, often wonder how all the varieties or "races" of people could come from the same original human ancestors. Well, in principle, that's no different than asking how children with different color hair ( i.e., blond, brunette, brown, red ) can come from the same parents who both have black hair.

*Some other Internet articles by the author are: "Why The Traditional View of Hell Is Not Biblical", "Early Christianity Before The Papacy", "Free Will and Sovereign Grace", "Christ Was Begotten, Not Created", "Artificial Life By Intelligent Design", "Any Life On Mars Came From Earth!", "Creationists Right On Entropy, Evolution", "Are There Natural Limits To Evolution?", "Where Are All The Half-Evolved Dinosaurs?". The most up-to-dateversions of these and other articles may be accessed at: Babu G. Ranganathan's Articles.

The author, Babu G. Ranganathan, is an experienced Christian writer. Mr. Ranganathan has his B.A. with academic concentrations in Bible and Biology from Bob Jones University. As a religion and science writer he has been recognized in the 24th edition of Marquis Who's Who In The East. The author's articles have been published in various publications including Russia's Pravda and South Korea's The Seoul Times. The author's website may be accessed at: www.religionscience.com .