Will Hillary Clinton do anything to get elected? Just two days prior to the Florida primary vote, Hillary Rodham Clinton announced she was going to Florida to promise Democrats that "their voices are heard" and to display her commitment to seeing the state's delegation is seated at the Democratic National Convention. 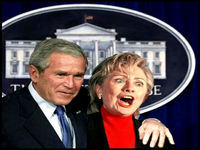 Both Michigan and Florida were penalized by the Democratic National Committee (DNC) for moving their primary dates forward in the calendar against party rules. The DNC rules stipulate that states that have not been granted a special waiver must schedule presidential nominating contests after February 5.

At the time of the announcement, Leonard Joseph, executive director of the Florida State Democratic Party said, "We are in a very tricky position. There is a lot of resentment from voters here directed at the candidates. They are very hurt by the fact that all of the candidates signed a pledge to not campaign here."

The DNC's rules and bylaws committee voted to strip Florida of all its delegates to the 2008 Democratic National Convention in Denver -- the harshest penalty at its disposal. Democrats hope to squelch other states' efforts to move their voting earlier, a situation which has created chaos in the primary procedure the national party established.

Clinton “won” Michigan unopposed by assuring she was the only Democrat on the ballot, and she “won” Florida as well. However, technically speaking, no delegates have been won in Florida and the candidates signed pledges not to campaign in the state. In spite of her win, delegate-wise as of now they are tied 0-0 in the winner-take-all State of Florida.

If both Clinton and Obama are short of the majority after Super Tuesday, there will be 156 delegates from Michigan and 210 delegates from Florida, most of which will be for Hillary, sitting on the sidelines. The Clintons will fight tooth and nail to get those into the count. By proclaiming that these delegates should be seated, Clinton is trying to capture extra votes at the convention that shouldn’t be available. However, it is almost a foregone conclusion that the party’s nominee will seek to reverse that decision because of Florida's crucial role as a swing state in the general election. By her announcement, Mrs. Clinton was speaking impudently and making self-aggrandizing assumptions.

"Hundreds of thousands of people have already voted in Florida and I want them to know I will be there to be part of what they have tried to do to make sure their voices are heard," Clinton said in Memphis, Tennessee before heading for Florida.

Clinton arrived in Sarasota, Florida as though still in compliance with the agreement, because events in Sarasota and later in Miami were not open to the public and were after polls closed in the state. She carefully staged her arrival so that she got off her plane with palm trees in the background for photographers. Asked if she was happy to be in Florida, she said: "How could you not be. It is absolutely glorious. It is a perfect day here in Florida."

"I hear all the time from people in Florida and Michigan that they want their voices heard in selecting the Democratic nominee.”

"I believe our nominee will need the enthusiastic support of Democrats in these states to win the general election, and so I will ask my Democratic convention delegates to support seating the delegations from Florida and Michigan. I know not all of my delegates will do so and I fully respect that decision. But I hope to be President of all 50 states and US territories, and that we have all 50 states represented and counted at the Democratic convention.”

"I hope my fellow potential nominees will join me in this. I will of course be following the no-campaigning pledge that I signed, and expect others will as well."

The Clintons would prefer to stir up chaos for the DNC rather than lose this election, lose a chance at another eight years in the White House for themselves and lose their stranglehold on the Democratic Party, despite knowing that it will fragment it. This move will likely embolden Michigan and Florida to now challenge the Democratic convention and its nominee, should that nominee not be Hillary Clinton.

Hillary Rodham Clinton will try to remain a boil on the backside of America with her unprincipled slash and burn politics. Should Hillary Clinton win the nomination of her party and then win the election in November, the world can expect either four or eight more years of the same Bush tactics. No agreement, no law, no standard applies to them...

In all their naked glory…the curtain has been pulled back and everyone can see what unscrupulous, devious and underhanded people the Clintons are. This is disgusting even by Clinton “standards.”

The earlier date change by Florida also caused sanctions from the Republican National Committee. Only half of the 114 delegates will be awarded to McCain. Rudy Guiliani is expected to withdraw with his loss in Florida after having concentrated all of his efforts unsuccessfully in the state. Guilani will now throw his support to John McCain. Two-time presidential candidate, John Edwards, notified a close circle of advisers that he planned to announce his withdrawal from the race in what was to be a campaign stop in New Orleans. There was no indication that he planed on throwing his support to either remaining candidate.