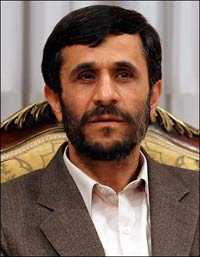 Ahmadinejad threatened unspecified retaliation by Iran if Europe followed in the footsteps of the United States, which last week announced sanctions against the Islamic state.

"If they plan to cooperate with the enemy of the Iranian nation, we cannot interpret this as a friendly behavior. We will show reaction," the radio quoted Ahmadinejad as saying.

The U.S. measure bans dealings with a host of companies connected to Iran's Revolutionary Guards, an elite force that has extensive business holdings in oil, construction and other sectors.

It also prohibits American companies from working with the Guards-linked Iranian companies and puts pressure on international firms and banks not to deal with them as well.

The U.S. and some of its allies claim Iran's controversial nuclear program masks attempts to produce a nuclear weapon. Tehran denies it is seeking nuclear arms and maintains its uranium enrichment program aims only to produce electricity.

Ahmadinejad spoke after a ceremony inaugurating a petrochemical complex in the southern port of Asalouyeh, some 1,500 kilometers (940 miles) south of the capital, Tehran.

"You, Europeans, know well what will happen in the economic sphere if Iran takes a serious move in this matter," the Iranian leader said.