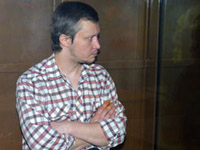 Russian serial killer who recorded his victims on a chessboard was convicted of 48 murders by Jury n Wednesday.

The jury took less than three hours to convict Alexander Pichushkin of the killings, most of which occurred over the course of five years in a park in southern Moscow. He was also found guilty of three attempted murders.

The judge, Vladimir Usov, read the verdict for one hour, while 33-year-old Pichushkin, standing inside a reinforced glass cage, leaned against the wall and stared at the floor.

Prosecutors were expected to recommend a sentence, and the judge was then expected to set a date for sentencing.

Russia has imposed a moratorium on the death sentence but has not abolished it.

Most of Pichushkin's victims were killed in the sprawling Bittsa Park on the southern edge of Moscow, and the serial killer became known as the "Bittsa Maniac."

Pichushkin boasted of killing 63 - one short of filling up the chessboard - but prosecutors were able to find evidence only for 48.