President George W. Bush is in need of another $46 billion (32.47 billion EUR) to fund the wars in Iraq and Afghanistan and finance other U.S. security needs. 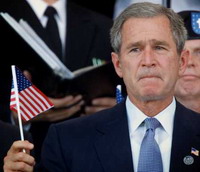 The figures were disclosed by congressional officials briefed on the request this morning and who spoke on condition of anonymity because the announcement had not yet been made.

The Iraq war, now in its fifth year, already has cost more than $455 billion (321.19 billion EUR), with stepped-up military operations running about $12 billion (8.47 billion EUR) a month. The war has claimed the lives of more than 3,830 members of the U.S. military and more than 73,000 Iraqi civilians.

Top House of Representatives lawmakers have already announced that they do not plan to act on Bush's request until next year, though they anticipate providing interim funds when completing a separate defense funding bill this fall.

Congress already has approved more than $5 billion (3.53 billion EUR) for new vehicles whose V-shaped undercarriages provide much better protection against mines and roadside bombs. It is likely that Congress will quickly grant $11 billion (7.77 billion EUR) more to deliver more than 7,000 of the vehicles.

The delays in submitting the remaining war funding request were in part due to unease among congressional Republicans about receiving it during the veto override battle involving a popular bill reauthorizing a children's health insurance program.

The request also includes $724 million (511.08 million EUR) for U.N. peacekeeping efforts in the war-torn Darfur region in Sudan, $106 million (74.83 million EUR) in fuel oil or comparable assistance to North Korea as a reward for the rogue nation's promises to cease its efforts to develop nuclear weapons. Another $350 million (247.07 million EUR) would go to fight famine in Africa.