15:42
Kyiv Mayor Vitali Klitschko: Zelensky wants to strip me of Ukrainian citizenship
14:51
Best pilot of Ukraine Air Force killed under unknown circumstances
14:37
Russia prepared to terminate diplomatic relations with USA on one condition
13:50
The Guardian reveals when the West will stab Ukraine in the back
20:57
Video shows moment of Salman Rushdie attack
19:16
Russia will face serious sanctions as USA will not recognise Donbass referendum
18:57
USA successfully empty European armouries having supplied all weapons to Kyiv
18:21
Chechen war veteran who now works as drag queen sings Russian anthem in a gay club
15:49
14-year-old hockey player dies as puck hits him in the chest during training

The Dalai Lama was instated in his first teaching professorship at a U.S. university. He fostered students, staff and faculty to defy money and renown for happiness. 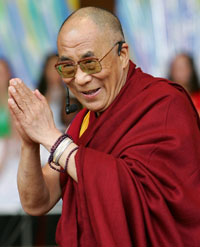 Education paired with destructive behavior is wasted, but knowledge used for good is a powerful instrument, the Dalai Lama said in his first speech as an official member of the faculty at Emory University.

"As a professor of this university, I think you should listen to me," he said, laughing.

At a formal ceremony in Emory's gymnasium, students presented the 72-year-old exiled Tibetan spiritual leader with a faculty identity card.

"I suspect you will not need to carry this with you for identification, but in any case, we wanted you to know you are welcome," said student Emily Allen as she handed him the card.

During the ceremony Tibetan monks in large, moon-shaped yellow hats chanted and played cymbals, gongs and horns. A quartet of Emory students sang the school's alma mater, with the Tibetan monks making guttural chants in between verses.

The ceremony was the culmination of a weekend of events on campus with the Nobel Peace Prize laureate. He was scheduled to give a free public talk in Centennial Olympic Park in downtown Atlanta later Monday.

Over the weekend, the Dalai Lama delivered a lecture on the basics of Buddhism to thousands and participated in a conference on depression. He also joined with spiritual leaders from the world's major religions including Rajmohan Gandhi, the grandson of Mohandas Gandhi to discuss peaceful resolution of military conflicts across the globe.

On Friday, Emory faculty presented the 72-year-old monk and Nobel Peace Prize laureate with a science curriculum they designed and translated into Tibetan. Emory faculty plan to teach the curriculum to thousands of Tibetan monks and nuns living in India starting in January, part of a program requested by the Dalai Lama to improve monastic education.

The Dalai Lama fled the Himalayan region for India in 1959 amid a failed uprising against Chinese rule. He remains highly popular among Tibetans and is lauded in much of the world as a figure of moral authority, but China reviles him as a Tibetan separatist.