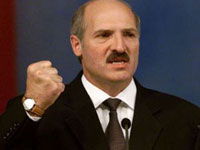 Belarus President Alexander Lukashenko had in a live radio broadcast on October 12 commented on the living conditions in his country's rural town of Bobruisk, which was once a major Jewish center.

" It was frightening to go in, it was a pigsty," Lukashenko said. "It used to be largely a Jewish city; you know how Jews treat the place where they live. Look at Israel; I was there."

"The role of leadership is to fight anti-Semitism wherever it raises its ugly head, all over the world, not to encourage it!" Livni said in a statement. "Anti-Semitism is primarily an indicator of the society in which it appears and of its leaders."

The Belarusian ambassador to Israel has been summoned to Foreign Ministry and will be advised of the strong condemnation, the statement said.

Belarusia's Foreign Ministry refused Friday to comment on Israel's criticism. The Israeli Embassy in Minsk said the ambassador had not been recalled.

Lukashenko, described by Washington as Europe's last dictator, has ruled Belarus since 1994, quashing dissent, closing down independent media and cracking down on private business. The United States and the European Union have imposed sanctions on him and on senior members of his government.

About 25,000 Jews now live in Belarus, a mostly Slavic nation of 10 million that was home to a substantial Jewish minority before the 1917 Bolshevik Revolution. Some 800,000 Jews were killed in Belarus by the Nazis, and many have fled the country since the 1991 Soviet collapse.