Austria will beatify the man beheaded by the Nazis for refusing to serve in Hitler's army. 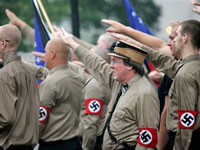 The beatification ceremony for Franz Jaegerstaetter will take place Oct.26 in a cathedral in Linz, Bishop Ludwig Schwarz, head of the Diocese of Linz, said Thursday.

Ten years ago, a Berlin court posthumously exonerated Jaegerstaetter, who was drafted after Germany annexed his native Austria, of refusing to serve in the Nazi army. His request to be excused from regular army service had been denied, and he was ordered executed for treason.

Jaegerstaetter had been the only person in his village to vote against the creation of a so-called "Greater Germany" shortly after Austria was annexed in 1938. He was beheaded in 1943.

"God was the middle and center of his life," Schwarz was quoted as saying by the Austria Press Agency.

Jaegerstaetter's widow and about 30 bishops are expected to attend the ceremony, which will be broadcast live on state television, APA reported.