United Nations reported that a clash between Georgian and Abkhazian forces caused the deaths of two Russians. Russia accused Georgia of premeditated murder. 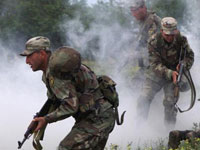 Tensions between Georgia and Abkhazia, the breakaway region, have been high since the Sept. 20 incident in mountainous terrain along the line that has separated the two sides since the early 1990s, when Abkhazia broke from Georgian control.

Georgian authorities said the clash took place when Abkhaz gunmen attacked workers building a road to link the Kodori Gorge with Georgian-controlled areas. The upper part of the Kodori Gorge is the only part of Abkhazia controlled by Georgian forces.

But Abkhazia claimed Georgian special forces entered a training camp on its territory.

The Russian officers were not part of its peacekeeping force in Abkhazia. Georgia claims they were training Abkhazians at the camp.

In a preliminary report released Thursday, the U.N. observer force in Georgia agreed with Abkhazia, saying the clash took place on Abkhazian-controlled territory about 300 meters (330 yards) from the administrative boundary.

The report also said that the Russian officers were killed at very close range, potentially suggesting they were fatally shot after being wounded. However, the report said U.N. investigators were still trying to determine the circumstances of the incident and a final report would be released in the future.

In a statement, Russia's Foreign Ministry said the report showed the killings were committed by Georgian special forces and should be considered "premeditated murder committed with particular cruelty.

"It is essential that the final results of the ongoing inquiry should identify this outrageous crime's organizers and perpetrators, who must face a deserved punishment," the ministry said.

Georgian officials have tried to downplay the report, but have made no major public statements, saying they would wait until the final report is released.

Abkhazia has had de-facto independence since 1993, when two years of fighting with Georgian troops ended and though no country recognizes its government, Abkhazia enjoys strong backing from Russia; two-thirds of residents hold Russian passports.

Georgia's president, Mikhail Saakashvili, has repeatedly vowed to return Abkhazia and another breakaway region, South Ossetia, to his government's control.

On Monday, the U.N. Security Council voted unanimously to extend the U.N. observer mission in Georgia, expressing "serious concern" at the violence there. The observer mission, in place since 1993, now has about 400 people, including 133 military observers and 19 international police.