U.S. Secretary of State Condoleezza Rice gave a highly positive estimation to the state of US-Russian regions before her visit to Moscow. Rice and Defense Secretary Robert Gates are arriving in Moscow on Friday, Oct. 12, to conduct negotiations on the problem of strategic security with Russia. Making a technical stop in Ireland on her way to Moscow, Condoleezza Rice said that the current relations between the United States and Russia could be described as quite good indeed. 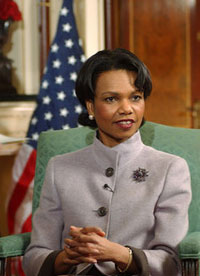 Rice says America's plans to expand its missile defense system in Poland and the Czech Republic will proceed, but she wants to seek Russian suggestions for cooperation to address Moscow's opposition to the program.

Rice and U.S. Defense Secretary Robert Gates were to meet with Russian President Vladimir Putin on Friday. Rice and Gates face arms control and diplomatic disputes that are testing the strength of U.S.-Russian relations, such as Iran's nuclear program, Russia's commitment to democracy and the U.S. missile shield in eastern Europe.

The Pentagon plans to install 10 missile interceptors in Poland, linked to a missile tracking radar in the Czech Republic. The Pentagon says the system will provide some protection in Europe and beyond for long-range missiles launched from Iran, but Russia believes the system is a step toward undermining the deterrent value of its nuclear arsenal.

Rice said the U.S. would go ahead with the program as planned.

"We've been very clear that we need the Czech and Polish sites," she said Thursday, although there's "considerable interest" in Russian ideas for cooperation such as sharing a Soviet-era tracking station in Azerbaijan.

"We're going to keep exploring ideas, we want to explore ideas," she said. "We are interested in other potential sites as well and we may be able to find ways to put that together."

Beyond the discussion with Putin, Gates and Rice also were to meet with Foreign Minister Sergey Lavrov and Defense Minister Anatoly Serdyukov. Rice and Gates also scheduled a dinner with First Deputy Prime Minister Sergei Ivanov, whose portfolio includes national security issues and who until recently held the defense minister's job.

On Gates' last trip to Moscow, in April, he explained a U.S. proposal for U.S.-Russian cooperation on missile defense, including information sharing and some joint experiments. So far the Russians have not responded, according to a defense official traveling with Gates who spoke on condition of anonymity.

Rice acknowledged Thursday that she would welcome a face-to-face discussion with Putin about his future political plans, including his interest in becoming prime minister.

The prospect of Putin clinging to power after his presidential term ends has caused U.S. dismay, with the Bush administration expressing concerns about democratic backsliding in Russia, a consolidation of power in the Kremlin, and crackdowns on independent media and opposition groups.

Rice, an expert on the former Soviet Union before she joined the administration, said she would not raise the issue herself.

"I wouldn't turn down that offer," Rice said with a smile when asked by reporters how she would respond if Putin raised the topic. But she refused to be drawn out on the subject.

Earlier this month, Putin said he would lead the ticket of the main pro-Kremlin party in the parliamentary elections coming up in the next few months and could later take the prime minister's job - a hint that he could remain at the helm and eclipse a weaker president.

On Iran, Putin says there's no proof Tehran is trying to build a nuclear weapons program.

Rice, on her way to Moscow, accused Iran of "lying" about the aim of its nuclear program and deceiving the U.N.'s atomic watchdog about its intentions.

"There is an Iranian history of obfuscation and, indeed, lying to the IAEA," Rice said, referring to the International Atomic Energy Agency.

U.S. officials long have accused Iran of trying to develop nuclear weapons behind the facade of a civil atomic energy program, charges Tehran denies. The Bush administration is pushing for new sanctions to punish Iran, but has yet to gather enough backing at the U.N. for such a move.

The U.S. and Russia also differ on the future of a treaty limiting deployment of conventional military forces in Europe as well as the prospect of Kosovo declaring independence from Serbia as early as December.