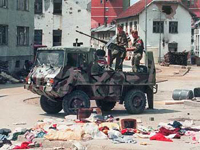 The bodies of 226 victims of the 1995 Srebrenica massacre were exhumed by forensic experts from a mass grave in Bosnia.

The mass grave, the third found in Zeleni Jadar, near Srebrenica, and one of dozens discovered in eastern Bosnia, contained only 34 complete bodies, while the rest were incomplete, said the head of the forensic team, Murat Hurtic.

This mass grave, like most of those found in the Srebrenica area, is filled with bodies moved from an original mass grave to try to cover up the crime, officials said.

The perpetrators usually used bulldozers which damaged the bodies. Experts sometimes find parts of the same body in different graves, making the task of identifying the victims more difficult. They have to reassemble the bodies using DNA analysis to return them to their families.

According to documents found among the remains it was certain that they were Muslim civilians killed after Bosnian Serb troops overran the eastern town of Srebrenica in 1995, Hurtic said. The victims were killed with firearms and hand grenades, he said.

Next week, his team will open the fourth mass grave discovered in Zeleni Jadar.

The systematic execution of about 8,000 men was the worst massacre in Europe since World War II and is considered an act of genocide.

So far, nearly 3,000 Srebrenica victims have been found, identified and buried in the Potocari Memorial Center near Srebrenica.

Another 5,000 bags with remains of victims found in nearly 60 mass graves in eastern Bosnia are still waiting to be identified before being returned to their families.