Nikolai Patrushev, Russia's , says Western spies are working to weaken the country and singled out British agents as the most intrusive, according to an interview published Wednesday. 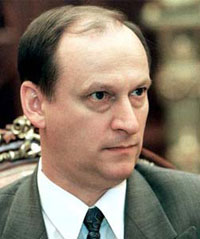 The Head of the Federal Security Service, the main KGB successor agency, also claimes that foreign spies are working to foment discontent in Russia in the run-up to December's parliamentary elections and the presidential vote next spring.

Patrushev is a longtime ally of President Vladimir Putin, and his comments reflect deeply entrenched suspicions of Western intentions in the Kremlin's inner circle amid a cold spell in Russia's relations with the West. Putin himself is a 16-year KGB veteran and former chief of the Federal Security Service, known as the FSB.

"Politicians thinking in the categories of the Cold War still retain their influence in a number of Western nations," Patrushev told the weekly Argumenty i Fakty. "They have claimed credit for the collapse of the Soviet Union, and they are hatching plans aimed at dismembering Russia. They are viewing special services and their organizations as an efficient instrument for their implementation."

Patrushev says that foreign spies are focusing their efforts on gathering information related to Russia's elections. "They are trying to influence protest feelings and demonstrations in Russia."

He singled out Britain's Secret Intelligence Service, or MI6, saying its agents "aren't only gathering intelligence in all areas, but they are also trying to influence the development of the domestic political situation in our country."

"We do not comment on allegations made against the intelligence services," a Foreign Office spokesman said, speaking anonymously in line with department policy.

Russian-British relations have been sliding, and they were strained further by last November's poisoning death in London of former Russian security agent Alexander Litvinenko. Litvinenko, a fierce Kremlin critic given asylum in Britain, accused Putin on his deathbed of being behind his polonium poisoning - charges the Kremlin has angrily denied.

Russia has rejected British demands for the extradition of the sole suspect in Litvinenko's murder, former KGB officer Andrei Lugovoi, who met with Litvinenko in a London hotel bar the day he fell ill. Putin dismissed the extradition demands as a relic of British "colonial thinking."

Patrushev said that his agency had learned how to counter British intelligence.

"We know both its strong and weak points," he said. "Since the times of Elizabeth I, (MI6) agents have been guided by the principle of the ways justifying the means. Money, bribery, blackmail, exemption from punishment for crimes committed are their main recruitment methods."

Patrushev claimed that British intelligence has relied on people who fled abroad to avoid criminal charges in Russia - an apparent hint at Kremlin critics living in Britain, such as tycoon Boris Berezovsky and Chechen rebel leader Akhmed Zakayev. Russia has vainly sought their extradition.

Patrushev also alleged that foreign spies were using non-governmental organizations "both for gathering intelligence information and as an instrument for having a hidden influence over political processes." He pointed at the revolutions that ousted unpopular governments in the former Yugoslavia, Ukraine and Georgia as a product of such activities.

The statement reflected Kremlin concerns over outside influence within Russia amid Western accusations of backsliding on democracy - the fears that prompted the government to tighten restrictions on NGOs.

"There is a danger of foreign NGOs being used to finance activities to undermine Russia," Patrushev said. He claimed that some NGOs were also being used by international terror groups to support militants in Russia's volatile North Caucasus.

Patrushev said the CIA and MI6 were actively relying on the special services of Poland, Georgia and the Baltics to spy on Russia.

He said his agency had uncovered 270 foreign intelligence officers and 70 agents they had recruited, including 35 Russian citizens, since 2003.

While fuming at the West, Patrushev said that his agency would continue to cooperate with its Western counterparts in combating international terrorism.