The Orange Revolution allies could win a majority in parliamentary elections that would allow them to unseat their longtime foe, Prime Minister Viktor Yanukovych. 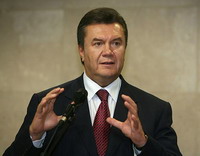 The poll indicated Yanukovych's bloc had won 35.5 percent of the vote, while Yulia Tymoshenko, the fiery Orange Revolution heroine, was following closely with 31.5 percent. President Viktor Yushchenko's party was trailing a distant third with 13.4 percent, according to the exit poll.

Yushchenko and Tymoshenko struck a last-minute alliance this week to form a coalition in parliament. If they follow up on their pledge and the president names Tymoshenko the prime minister, that would mend a rift that has split the Orange Revolution forces and thrown the nation into political turmoil.

A new Orange coalition could be expected to steer Ukraine more firmly onto a pro-Western course, while Yanukovych, who relies on support from Russian-speaking eastern regions, is seen as more Russia-friendly.

The poll, conducted by a team of Ukraine's three leading polling agencies, had a margin of error of 2 percentage points.

The Communists, who said they would form a coalition with Yanukovych's party, got 5.1 percent of the vote, the exit poll showed. The party led by former parliament speaker Volodymyr Lytvyn, who has been vague about his future affiliation, got 3.7 percent, just above the 3 percent threshold for parties to get into parliament.

Even if Yanukovych's party merged with both smaller parties, it would still fall behind an alliance of Yushchenko and Tymoshenko, which together appear to have secured a simple majority of at least 226 votes in the 450-seat parliament if the exit poll's findings are confirmed.

Other exit polls had similar results.

Tymoshenko, smiling triumphantly after the exit polls were announced, said she would meet with Yushchenko on Monday to quickly formalize their new alliance. "In one or two days we will announce the coalition," she told reporters.

Yuriy Lutsenko, the leader of Yushchenko's party, said it was ready to back Tymoshenko as prime minister after the coalition is formed.

Tymoshenko pledged that the new government would push strongly to integrate more closely into Europe and quickly join the World Trade Organization.

At the same time, she said Ukraine would seek to develop good relations with Russia and hold talks shortly on imports of Russian gas and its transit to Europe. "We will guarantee a balanced, harmonious relationship with Russia," she said.

While Tymoshenko's headquarters celebrated the results with champagne, a gloomy silence hung over Yanukovych's campaign office.

A somber-looking Yanukovych made a brief statement in which he tried to present the results as his party's victory, saying it would now start talks with potential coalition partners. "We consider the election results as a carte blanche for our party to form a new government," he said. He took no questions and left.

Yushchenko has voiced hopes that the vote - the fourth national election in three years - would boost Ukraine's efforts to integrate more closely into Europe and leave behind the political infighting that has paralyzed the government.

Casting his ballot at a Kiev polling station, he described the vote as a choice between the future and the past.

"The choice is between two alternatives: false stability and change," Yushchenko said. "I'm convinced that today, the nation will opt for change. I think that the elections will bring Ukraine mutual understanding and tolerance between political forces, stability and economic growth."

Ukraine's political fortunes had seemed firmly determined after hundreds of thousands of protesters paved the way for Yushchenko's victory in the Orange Revolution protests against Yanukovych's fraud-tinged win in the 2004 presidential vote.

But the Orange camp plunged into acrimonious infighting shortly after the victory, with Yushchenko firing Tymoshenko as prime minister in September 2005 after only seven months on the job.

And Yanukovych, a 57-year-old former metal worker, made a stunning comeback in the March 2006 parliamentary elections when his party won the most votes, propelling him back into the premiership.

Yanukovych sought to change his image, casting himself as a democrat and preaching compromise and stability. He also eased his affiliation with Russia and underlined his push for Ukraine's integration into Europe.

Unlike the 2004 vote when the Kremlin staunchly backed Yanukovych, Russia has stayed away from the parliamentary election.

Yanukovych fiercely resisted Yushchenko's April decision to dissolve parliament and call new elections after the president accused him of seeking to usurp power. Yanukovych grudgingly agreed to Sunday's vote, but has hinted he would accept only one outcome: his victory.

Yanukovych has accused Yushchenko's and Tymoshenko's parties of preparing widespread falsifications, and warned he could organize protests similar to those during the Orange Revolution. He said his party would not accept an "unlawful" outcome.

"If the Orange try to steal our victory, we will be able to defend it," said Andriy Zhigalov, a 50-year-old bookkeeper who cast his ballot for Yanukovych's party at a Kiev polling station.

In the Orange camp, Yushchenko, 53, has struggled with voter disillusionment and a loss of support among many voters now backing Tymoshenko, known here simply as Yulia.

Tymoshenko, 46, who wears a flaxen braid wrapped on her head, had parted ways with Yushchenko after he fired her in 2005. Their two parties then lost a chance to form a coalition following last year's parliamentary elections, sowing even further disillusionment among liberal voters.

While Yushchenko's position has weakened, Tymoshenko has won over many of his supporters. Her bloc's showing Sunday far exceeded its performance in last year's parliamentary elections, when it won 22 percent of the vote.

"She always gets her point across. She's always true to herself - today she's the same as two or three years ago," Pyotr Shekhvits, a 53-year-old medical worker, said after voting for her bloc.

Tymoshenko has long said that reuniting the Orange team was the only chance at implementing reforms and integrating with the West.

"I'm sure that Yushchenko and Yulia won't repeat their mistakes. I want to live in Europe, and only the Orange forces can take us there," said businessman Oleg Kileiko, 46, who voted for the president's bloc.